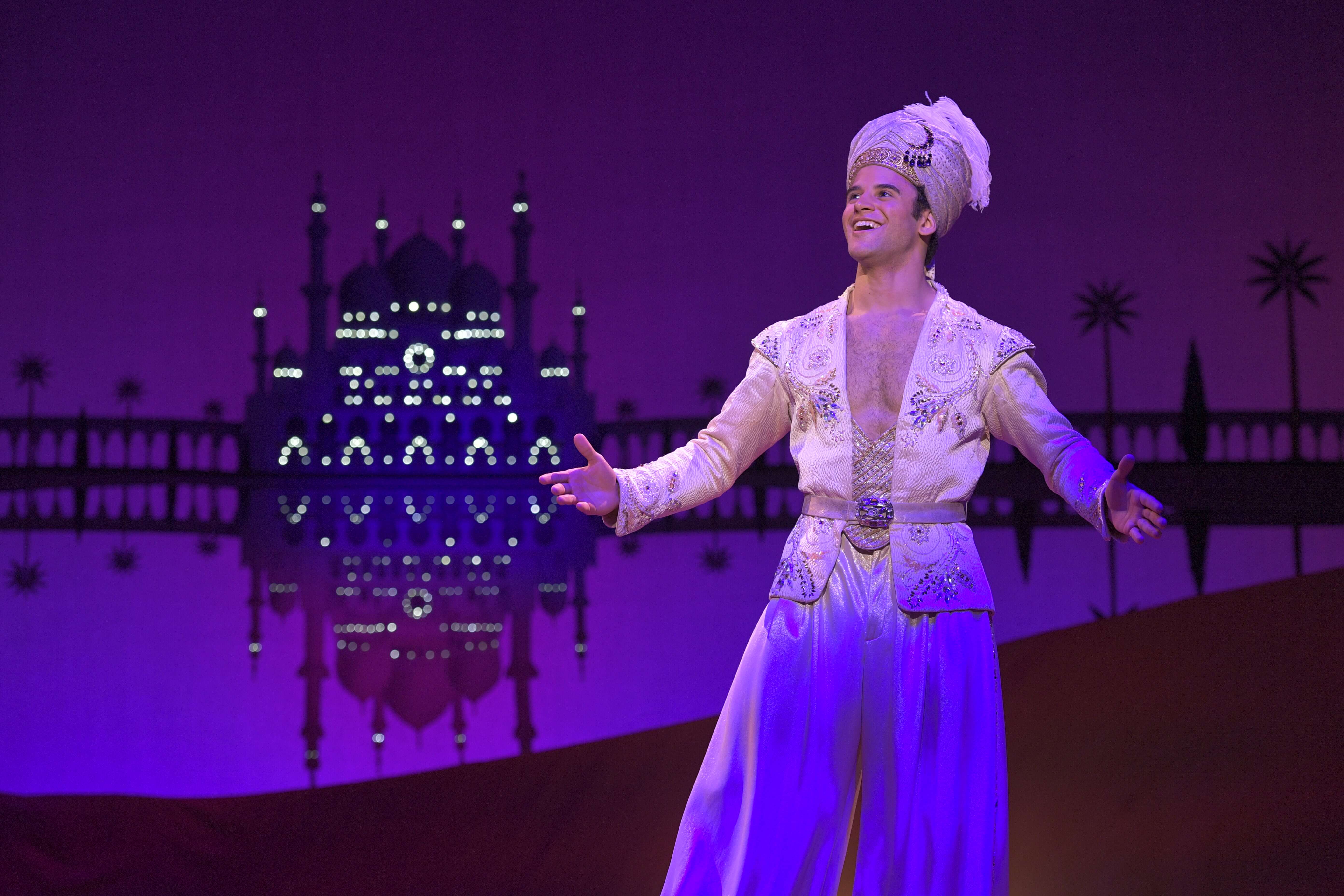 If you ever wanted to see a Disney classic come to life in theatrical glory and grandeur, your wish is granted. Aladdin, which opened at the Orpheum Theatre Jan. 16th, captures that essence in a two-hour uplifting menagerie of storytelling, woven with magic, opulence, and plenty of light-hearted humor. Much like the Disney classic animated feature film, Aladdin stays true to its nature and the script of the 1992 film. There are a few minor alterations in this version-Aladdin is sans Abu, his monkey pet and friend, and instead has a misfit entourage of endearing sidekicks that are his partners in crime. Iago is personified as a parrot but presents as human form. Adding a new dynamic, Al’s pals, thick as thieves, traverse from market to market to sell their wares and fraudulent schemes. But when Aladdin, due to some unforeseen diamond-in-the-rough qualities he possesses, chances upon a mystical and flamboyant genie, and wishes to be a prince even Princess Jasmine can’t resist, the street gang resorts to their musical comedy schtick with ease. Only Aladdin could pull this off and dare to contend for the heart of the princess.

Gorgeous sets, lavish and vivid costumes, even acrobatics, as well as brilliant special effects are as Disney as it gets. The beginning number “Arabian Nights,” hearkens back to a very reminiscent “Little Town-esque,” opener from Beauty and the Beast with townspeople, a frenzy of action, and setting the scene for high stakes as the protagonist sets out on a journey of self-discovery and love (insert fairytale trope). But once again it’s Disney, so it’s to be expected. Directed by Casey Nicholaw (Director, Choreographer,) with book by Tony Award nominee Chad Beguelin (Elf) who is known for his work on The Book of Mormon and Something Rotten, the show transports you to another time and place. Costumes are executed by two-time Tony-winning Greg Barnes, and the set design crafted by seven-time Tony-winning scenic designer Bob Crowley.

Aladdin was originally inspired from literary masterpiece One Thousand and One Nights, an Arabic chronicle of fables rivaling the Good Book with its popularity. Tales such as “Aladdin and the Lamp,” “Sinbad,” and “Ali Baba and the Forty Thieves,” all helped to create the story that we know and love-that became a smash hit at the box office in the era of the Disney Renaissance. The release of Aladdin was right before iconic Beauty and the Beast was brought to film but certainly made way for its predecessor with enormous success. Other films from that period (referenced cleverly throughout) were The Little Mermaid, Beauty and the Beast, and The Lion King.

The actors breathe 3D life into their theatrical characters. Jasmine (Lissa deGuzman,) sports enough spunk and determination to be a challenge for her suitor. She is not a princess of yesteryear, with a damsel in distress mentality. Jasmines proves to be strong and independent in her own right, dejecting the ancient laws of the land in regards to matrimony. Aladdin, played by Clinton Greenspan, is boyish and quick-witted, and the ideal suitor for a fierce and independent princess. Greenspan’s charm broke the fourth wall and illuminated to the rafters, exuding the essence of our animated hero. The nefarious Jafar, (Jonathan Weir) royal advisor to the sultan (Jerald Vincent), does his best to be the quintessential archetype of a diabolical villain plotting to take over the palace and rule as sultan. The show-stopping Genie (Michael James Scott) tops it off with his brassy, showy display of sass and flair and over the top performance. He is a delightful, bonafide Fats Waller in the flesh; interacting with the audience in a performance so energetic, I was buzzing afterward. The only thing bigger than his personailty was the set itself.

The iconic and beloved numbers alone will make you want to dance in your seat.

“A Friend Like Me,” brought down the house Thursday night worthy of its own standing ovation. The lively audience roared and clapped sending waves of applause to the rafters. Music written by Alan Menken, the late Howard Ashman, and later Tim Rice, features five of the original songs from the movie including “Arabian Nights,” “Friend Like Me,” “One Jump,” “A Whole New World,” and “Prince Ali.” Each number is as riveting and engaging as each memorable featured song in the film.

Aladdin posing as a prince in “Prince Ali” is one of the most splendid parades of elaborate entertainment flourished with elan you may ever see to grace the Broadway stage. The same goes for “Friend Like Me,” with gilded sets that glint and gleam, and are the highlight of the number, coupled with sultry, stylized jazz, tap, ballroom dance, and Middle Eastern-inspired choreography complete with pyrotechnics and award-winning lighting design. This guy really knows how to make an entrance. And the breathtakingly romantic, “A Whole New World”, Aladdin and Jasmine’s duet in the sky. Newer songs were just as fun to watch as the classics, especially ones brought to life by Aladdin’s pals. See: “High Adventure”

You will love the array of vibrant color and fabrics ranging from rich brocades to iridescent Swarovski- encrusted regalia. The show boasts over 337 costumes, and over 110 costume changes. Some of them are so quick and happen in a blink of an eye. In fact, one is timed expertly down to thirty seconds. Unbelievable sights such as a magic carpet suspended in the air, a celestial, starry night sky with a menagerie of looming, moving sets synced perfectly between scenes, and pyrotechnics top off this wonderful production.

One gets a sense that the late Howard Ashman surely envisioned this caliber of production for the sensational animated feature film Aladdin that in 1992 mirrored the phenomenal success of today’s Frozen. Aladdin does the film every bit of justice and will take you along for a magical ride.

Aladdin plays Tuesdays through Fridays at 7:30 P.M., Saturdays at 2:00 P.M., and 7:30 P.M., and Sundays at 1:00 P.M. and 6:30 P.M. with a matinee performance on Thursday, January 17th. VIP ticket packages are available which include a prime seat location, commemorative souvenir program, and exclusive merchandise item. Tickets are priced at $35 and can be purchased at the Ticket Omaha Box Office and online at TicketOmaha.com.