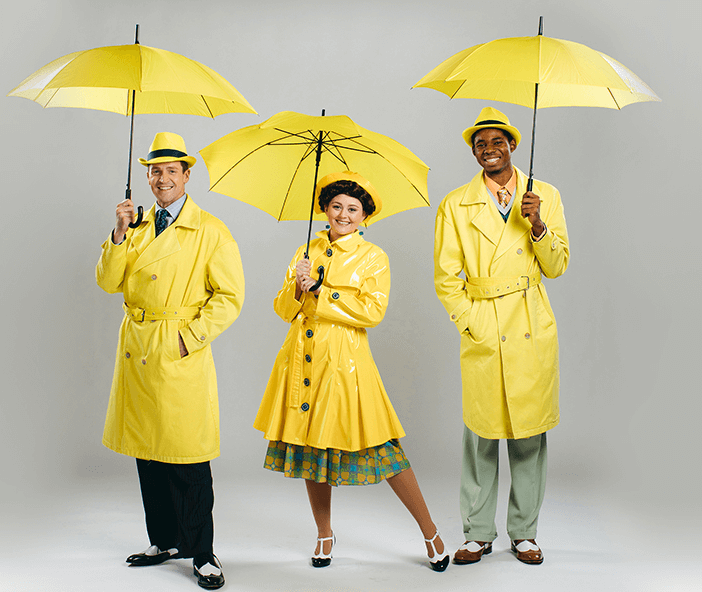 Singin’ in the Rain wasn’t an instant hit when the film came out in 1952, but it grew into a classic ranked by some as the greatest movie musical of all time.

So why did it take so long for the live version to land on the Omaha Community Playhouse stage?  That’s open to interpretation, but two reasons rise to the top:

The good news is that director Kimberly Faith Hickman and her strong leading players met most of the challenges. And that accomplishment deserves a full explanation, but maybe you need a quick summary of the story.

Don Lockwood and Lina Lamont, a ditzy blonde diva, have been co-starring in silent movies when along comes the first talkie, “The Jazz Singer,” and poses a problem: Lovely Lina has a shrieky voice. Enter the ingénue, sweet little Kathy Selden (think Debbie R.) with a voice that can sub for Ms. Lamont as the transition to talkies turns “The Dueling Cavalier” to “The Dancing Cavalier.”

Here’s how Director Hickman makes this all come together. Few of us have vivid memories of Jean Hagen who played Lina, so Cathy Hirsch is a delightful hit in that role, turning the character into a very likable villain.

J. Isaiah Smith is so different from Donald O’Connor, and so downright appealing that he doesn’t face close comparisons with the original. If you’re waiting for moments to bring that Broadway show biz pizazz to nostalgic life you’re most likely to get them from his Cosmo, especially when he goes into the “Gotta Dance” routine in the “Broadway Rhythm” number which brings the entire ensemble into action.

Tayler Plank as sweet Kathy, on the other hand, can handle any inclinations for comparison with Debbie Reynolds because she seems born to fit that role. Pert and pretty, she can sing, she can dance and she’s a believable love interest for the leading man.

Hickman brought her Don Lockwood from the Georgia theater that gave Omaha its legendary director of musicals, Charles Jones, and also played a part in Hickman’s career. So it’s Nate Wasson faced with the greatest challenge, coping with the most iconic role of all in the shadow of Gene Kelly.

Given the near impossibility of that mission, Wasson at least gets a passing grade and might have come even closer to meeting expectations with more help from the makeup department. He was dealing on preview night with what looked like a half mustache on the right side of his upper lip.

Despite that distraction, his persona, voice and dancing measured up.

And the show gave veteran character actors Rob Baker and Don Harris roles as movie mogul R.F. Simpson and director Roscoe Dexter that Playhouse fans have enjoyed over decades of their comedic work. Baker’s blustery R.F. decides that switching to a talking musical means, “We need tap dancing,” and Don’s Dexter complains, “We can’t have tap dancing . The picture takes place in the French Revolution!”

On the technical side, the rain was a bit late in pouring down for the title number and then it looked more like water coming out of a blocked gutter in places. But it allowed Lockwood to splash freely enough to be effective.

As for the “Make ‘Em Laugh” number, Smith’s Cosmo sold that dance without running up walls with his lanky agility. My quibble? I’d still have him run thru a prop paper wall even if it had to be replaced in every performance.

More than a quibble: the ensemble was more motley than usual with a small middle school kid mixed in with adults.

Singin’ in the Rain runs through June 24 at the Omaha Community Playhouse Hawks Mainstage, 69th and Cass Streets, with performances at 7:30 p.m. Wednesday-Saturday and 2 p.m. Sundays. Tickets are available by calling 402.553.0800.