The first time I ever saw a show at SNAP! there was a picket line out front. About a dozen people warning me (and my soul) what were to come if I dare enter the theater and watch Judas seduce Jesus in Corpus Christi by Terrence McNally. Well, I went in…and my soul did NOT go up in flames…but, I was hooked. Since their inception in 1993 SNAP! has never shied away from groundbreaking themes, some well before their time (and mine), tackling subjects of sexuality, racism, disabilities, age and family dynamic. From their earliest years SNAP! has heralded a commitment to AIDS awareness and diversity, and their latest offering is an absolute tribute to those missions. 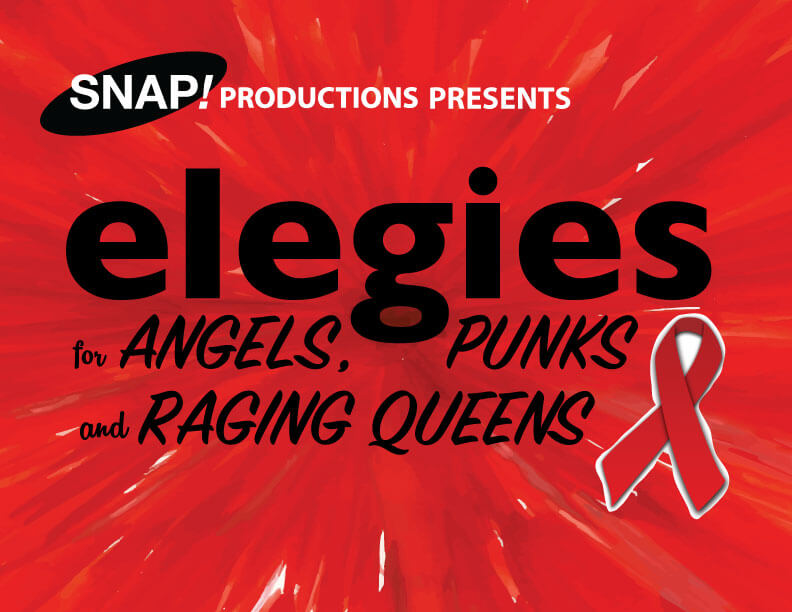 Elegies: for Angels, Punks and Raging Queens is a song cycle written by Bill Russell and Janet Hood and features monologues inspired by the NAMES projects AIDS memorial quilt and the Edgar Lee Masters’ Spoon River Anthology –a startling dichotomy in art, marrying the worlds of small town living and the AIDS epidemic. One part Shakespearean-like prose, one part church sermon, one part musical review, Elegies introduces first person stories of loss by AIDS, contracted in many different ways, by many different kinds of people. Intermittently we hear songs sung by a chorus of four survivors, struggling with the depths of the loss but also the joy of their memories. That chorus is served well by the beautiful and entertaining voices of; Joey Galda, Jennifer Gilg, Emily Jane Moore and Jerry Van Horn.  I went into this show expecting a rock and roll, ‘F you AIDS’ vibe more in line with RENT or Hedwig, but I was pleasantly surprised to be wrong in that assumption. What I found was a tender and moving love note to those who have suffered the loss of a loved one or have battled the disease themselves. There were some funny moments and some F you ones also, but the heart of this show was in the softness of the ballads and the honesty in the prose.

Elegies was written in 1989 and the show has many moments that remind me of that, I found my head going back in time to when the loss to AIDS was truly harrowing the numbers great, and how devastated communities everywhere were during  that time. And here SNAP! opened just 4 short years later, I could feel that in the undercurrent of what this show means to the company, specifically co-directors Michal Simpson and Echelle Childers, who tagged team this extensive cast with some graceful and poignant leadership.

Speaking of the cast it is a who’s who of local talent, from stage veterans to (Connie Lee, Mary Kelly and Therese Rennels sharing a stage? Be still my heart) To theater newcomers, stage favorites and a father/daughter duo. it is a logistical miracle they even got so many cast members on the same schedule. (Cue: applause) The cast is one of the most diverse I’ve ever seen on an Omaha stage–in race, sexuality, age, sex, ability and experience, this cast is an absolute triumph in terms of inclusion and story-telling. To be able to garner so many demographics is a testament to the SNAP! brand. 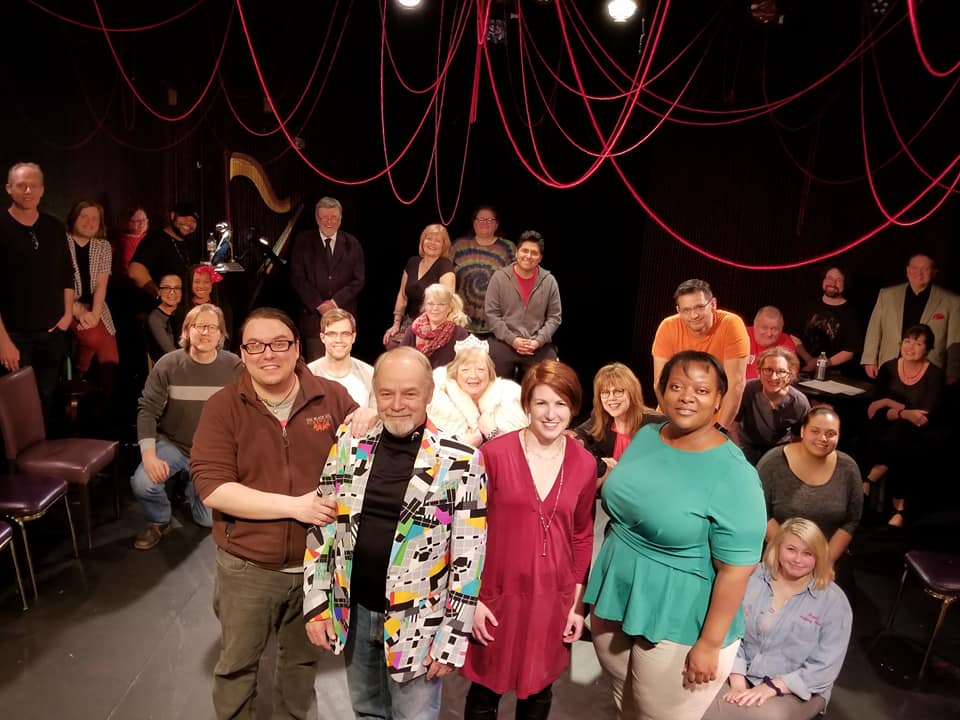 For Elegies the SNAP! space has been transformed into a bit of a nightclub, the audience set in rows horse-shoed around the set, which is full of cocktail tables and chairs. A large red AIDS ribbon outlined on the floor and red strings dangle above the set which was conceived by Ben Adams. As the monologues continue, the set becomes filled with characters all sharing their stories, struggles, laughter and fear surrounding their lives and deaths. It is an imperative time in American History and one that can never be forgotten. Elegies is a beautiful memorial to those who remember it best.

Who should see this show: Everyone! But I think the young LGBTQIA community could particularly benefit from hearing from the folks who paved the way.