In celebration of the 25th anniversary of the Japanese Yamato drum troupe, the Holland hosted a memorable performance on the Valentine’s Day evening. Titled “The Challengers” this production was nothing short of a ceremonial approach to drumming in the Taiko traditional style. Picture over 10 varying sized drums almost as tall as a 5-foot person in diameter, propped up like a trophy in a case. In fact, the centering drum which kicked off the event weighs at least half a ton. The sound doubled in impact reverberated across the room. The approach was athletic in nature, confirmed by the sharp cuts in the drummers physique which resemble the strength of a warrior.

Also not discounting the experience as a spiritual one, every rhythm seemed to be honoring an ancestral call for drummers. The triangular poses were done intentionally with powerful chants woven between beats. You won’t hear a melodic voice throughout the experience but instead the reflection of nature sounds through the wooden flute and wind chimes. Humor was also blended into the program with lead drummers requesting audiences to clap the beats mimicked by the drummers on stage.

After two sessions of drumming, the crowd gave double standing ovations. It was with no regret that each audience member spent the evening as a witness to this magical exposition. Should you ever see the name of this troupe again, be sure to book seats for the whole family. Expect to be transported to the other side of the globe. 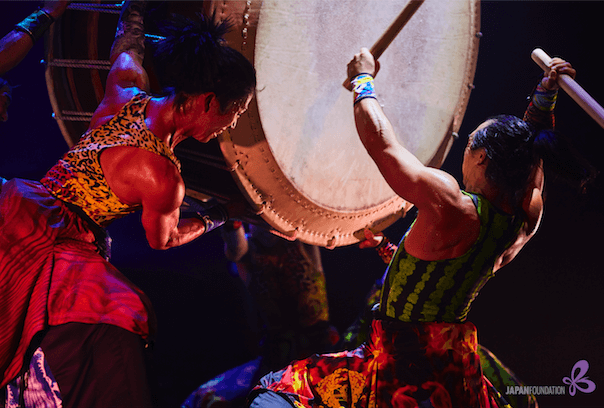