Last Thursday, I was in the audience of the premiere of David Ives’ Venus in Fur at the Blue Barn Theater. The 2010 Tony Award-winning play is a modern look at an old text. A text that challenges gender expectations, addresses power plays, and galvanized the term “sadomasochism.” The novel that inspired the play is Venus in Furs (Venus im Pelz), written in 1870 by Leopold von Sacher-Masoch. The novel takes its own role in the show’s plot, as it unfolds and two actors zip back and forth in persona, accent, time, and most rousing, control. The Blue Barn’s dynamic version, directed by Ablan Roblin, meets the challenges both Sacher-Masoch and Ives provide. An altogether timeless and timely piece, Venus is incidentally political in 2017. In the wake of sexual harassment and abuse justice and a sea of  #MeToos crashing into a rocky awakening, this play finds a new purpose in trying times.

This season is the Blue Barn’s 29th and the theme is ‘Connect,’ a word that brought Blue Barn’s  Artistic Director Susan Clement-Toberer to finally choose a work she’d been eyeing for a while, citing the main characters’ important connection in the show, which inexplicably turned into a mirror on current society.

“We ask ourselves how can the Blue Barn use their voice to help us all forward think. We plan a season and by serendipity the plays turn out to be timed so well. The whole country is having a movement right now, that directly ties back to the themes in Venus in Fur.”

“We chose this show six months ago and look how much has changed since then,” Barry Carman, Blue Barn Dramaturg-in-Residence adds. “In 2018 this is a different play than it was in 2010.” 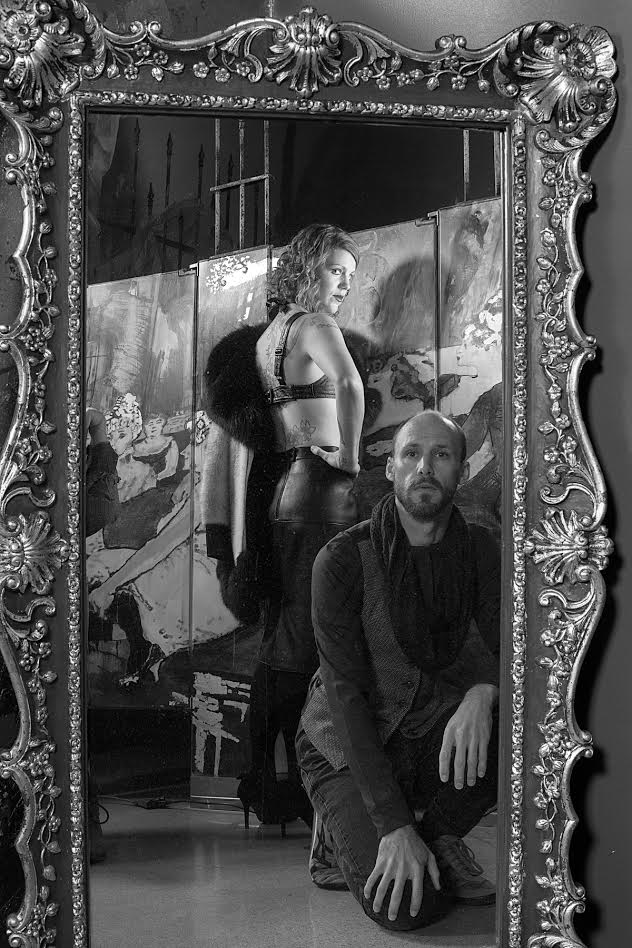 The Blue Barn prides itself on its collaborative vision and execution when bringing a work to the stage. Ablan, Susan, and Barry create a trifecta of creative leadership on Venus, while paying homage to their technical team. A technical team who became cast members in their own right through their transformational attention to every detail. The stormy night, the harsh to soft lighting elements, the subtle staging, and the detailed and plentiful costuming, all take their turn to shine. The technical crew includes the masterful Steven Williams, Bill Kirby and Georgiann Regan.

The two at the center of the story are Matthew Olsen  and  Sarah Carlson-Brown, as Thomas and Vanda both skilled actors that provide deft and powerful performances; they take the demands of the script and craft them into delicious and tangible gifts. During casting, Roblin was looking for particulars. “Of course, skill: we needed actors that could manifest these personas and really deliver.  Olsen and Carlson-Brown met all of those requirements. It was clear from my side of the stage that the roles, as they work in tandem, also required a lot of trust between actors as a pair and also with their director. Such is often the deal between dominant and submissive partners as Venus dips into BDSM subculture and explores the deeper meaning beyond the term masochism.

“We explored quite a bit–about consent. About safe words and boundaries, at its core it’s about building a healthy and trusting relationship,” Roblin continues. “It seems taboo, but it’s all about communication.”

As Vanda’s character came further into her power in the rehearsal room, America’s social climate began to heat up, with sexual harassment claims and repercussions firing on all cylinders. The tone of the show began to take on new shape as women nationwide stepped up to tell their stories.

“It was really important that this was a collaborative effort, we have a male playwright talking about a female/male relationship with a male director and male dramaturg. Having Susan in the room was an integral part of the process, as well as our lead actress,” Carman admits. “However smart, funny, timely, astute…it’s still a bunch of males telling women what they are. So we stayed aware of that.”

“What’s going on in the world right now came late in the game. And what happens in the end how that’s felt, we knew there could be a lot of different ways to end this play. We felt it was super important for the play to end powerfully. Because so many times when you’re a woman in a powerful position, it comes with negativity, when really it can be beautiful.”

This upcoming Saturday, February 10th, the Blue Barn will be hosting an open town hall to address sexual harassment in the Omaha Theater Community. This “Safe Stages” conversation is in line with the national trend, spurred on by Chicago’s theaters own sexual harassment scandal, resulting in several firings and the “Not In Our House” campaign. “We don’t want to be in the position that Chicago found themselves in,” Carman exerts. The panel consists of several artists, all in different roles in theaters across town, including Regina Palmer, Matt Gutschick, Beaufield Berry-Fisher, Amy Lane, Denise Chapman and Jeff Horger and will be moderated by Suzanne Withem. The talk serves as a means of community awareness, much in the vein of the Diversity Panel held at the Union for Contemporary Arts in October of 2017.

“You know, it’s not a witch hunt, it’s asking how do we take the “me too’s” and the “what have I done’s” and the “I believe you’s” and turn that into energy that changes things. It is a national reckoning on sex haraassment,” Carman continues. “In the theater world, in every industry and profession, things are highly charged right now. And it’s more important and to have these protocols and conversations in place, to discuss boundaries and vulnerabilities. Intimacy is a minefield.”

The first half of the discussion will be moderated questions that the panel weighs in on, the second half a reverse as the panel asks questions of the audience and the floor opens up to all, in the hopes to move forward with ideas in how to eradicate the occurrence of harassment in our houses.

“There is no end to the discussion. This is the beginning and it leads to best steps. To working groups, to leaders in institutions working together,” Carman looks forward. “I just want it to be a jumping off point, not try to solve all of our problems in an afternoon.”

These two events coincide with symbiotic fusion, much  like the themes in Ives piece; urgent, political, and evolving. I leave the last word to the woman at the helm.