For 43 years, A Christmas Carol has inspired Omaha Community Playhouse audiences, both the newcomers catching it for the first time and those of us who’ve seen it year after year and still shed tears of joy when a reformed Scrooge hugs Tiny Tim and the lad asks God to bless us “every one.”

But that doesn’t stop us from recalling that the Playhouse once dared a parody treatment of its classic where players were so jaded by performing year-after-year that they wanted to end with an unredeemed Scrooge. And a not-so-tiny Tim had grown too large for Bob Cratchit to hoist on his shoulders.

So we revere the collaboration between Charles Dickens and our own Charles Jones, but don’t mind being a bit irreverent about it.

For example, on preview night the touching climax when Scrooge (Jerry Longe) imbibes the “milk of human kindness” before bringing gifts to the Cratchits found that “kindness” cup overflowing with smoke so abundant one feared that first responders would be called to the Cratchit house. 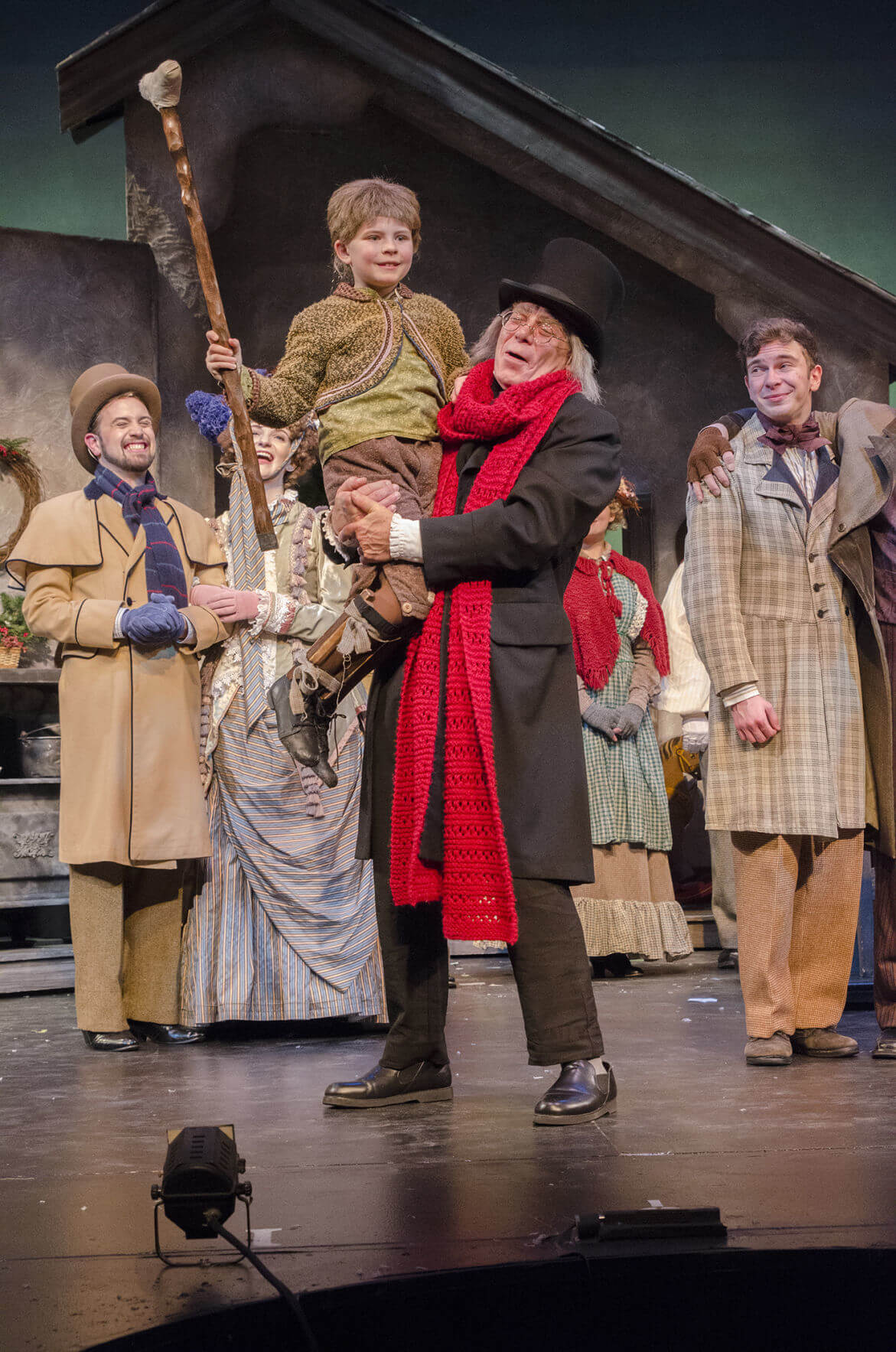 More often, though, I found myself comparing cast members with some of their predecessors and enjoying how faithful director Kimberly Faith Hickman has been to the past yet not fearful of making adjustments.

If the Minions who enter with Marley’s Ghost (Don Keelan-White) hadn’t been added a few years ago, we wouldn’t have had the pleasure of realizing that our favorite child star of decades  ago, Christina Belford (now Christina Rohling), was not only Mrs. Cratchit but the mother of two of the raggedy Minions, her Jane and Marie, and son Benjamin playing the Shepherd boy.

Yes, the young woman who played the lead in Peter Pan, vowing to never grow up, is now sharing the stage with three of her four children.

Somehow, her Mrs. Cratchit and Chris Berger’s Bob Cratchit and Chloe Irwin as their daughter Martha seemed more appealing than the many fine players who’d gone before. And the relatively new Ghost of Christmas Past, Lori Lynn Ahrends, brought back the melodic laughter so familiar from other Ghosts now gone.

Josh Peyton has the good fortune to play the  most sympathetic figure in Fred, the nephew who remains kindly toward his Uncle Scrooge in the face of his “Bah, humbugs.” In his fifth season in the cast, he joins a company that includes scenic designer Jim Othuse who was with Charles Jones at the very beginning, and Jan Bogardus who began playing in the orchestra in 1977.

The former Ralston music teacher thought of quitting after last season but came back and has no plans to retire from a group “that gives 150 percent all the time.”  Two conductors, the original orchestrator John J. Bennett and the current longtime musical director Jim Boggess, led the musicians for most of those 43 runs.

Bob Gilmore, in just his second turn as Ghost of Christmas Present, fills a role held for about 40 years by first white-bearded Bob Snipp and then hefty Mike Farrell.  Like Gilmore, Farrell also played the cheerful Mr. Fezziweg.

And Jerry Longe in his 13th year as Scrooge still finds new touches to surprise even those who’ve seen him each December.

One could go on at even greater length describing the parts that make the whole of A Christmas Carol, but only being present when the curtain opens to reveal that London street full of people, young and old, peddlers and shoppers, veiled behind the scrim can capture that moment when the musicians strike up “God Rest Ye Merry Gentlemen” and the story begins again.