I’m not a nerd. I mean, I don’t think I am. If going to see plays alone and then sitting in the dark writing about them, between poetry sessions makes me a nerd…so be it. BUT, I know, unequivocally, I am NOT a gaming nerd. I don’t D & D, I don’t Fortnite. When I go to events based on these paramounts of “nerdism” I am prepared to be lost, like a popular girl in Gamerz. She Kills Monsters, made me roll the dice, and I came out better for it. If this show is for me, this show is for you.

Tilly (Chloe Irwin) is a brave, odd girl who dreams of life beyond the normal. Her older sister, Agnes (Catie Zaleski)  is not. They couldn’t be on more opposite sides of the social spectrum. When tragedy strikes their family Agnes is catapulted out of her comfort zone and into Tilly’s secret world, a world within an RPG. It’s in this upheaval (from Ohio to New Landia) that Agnes learns deeper truths about her sister and is forced to face her own fears as she battles through the game on a search to save Tilly’s soul. Ping-ponging between fantasy and reality, we see how everyday people in Tilly’s life played a role in her game, causing Agnes to see her world differently as well. 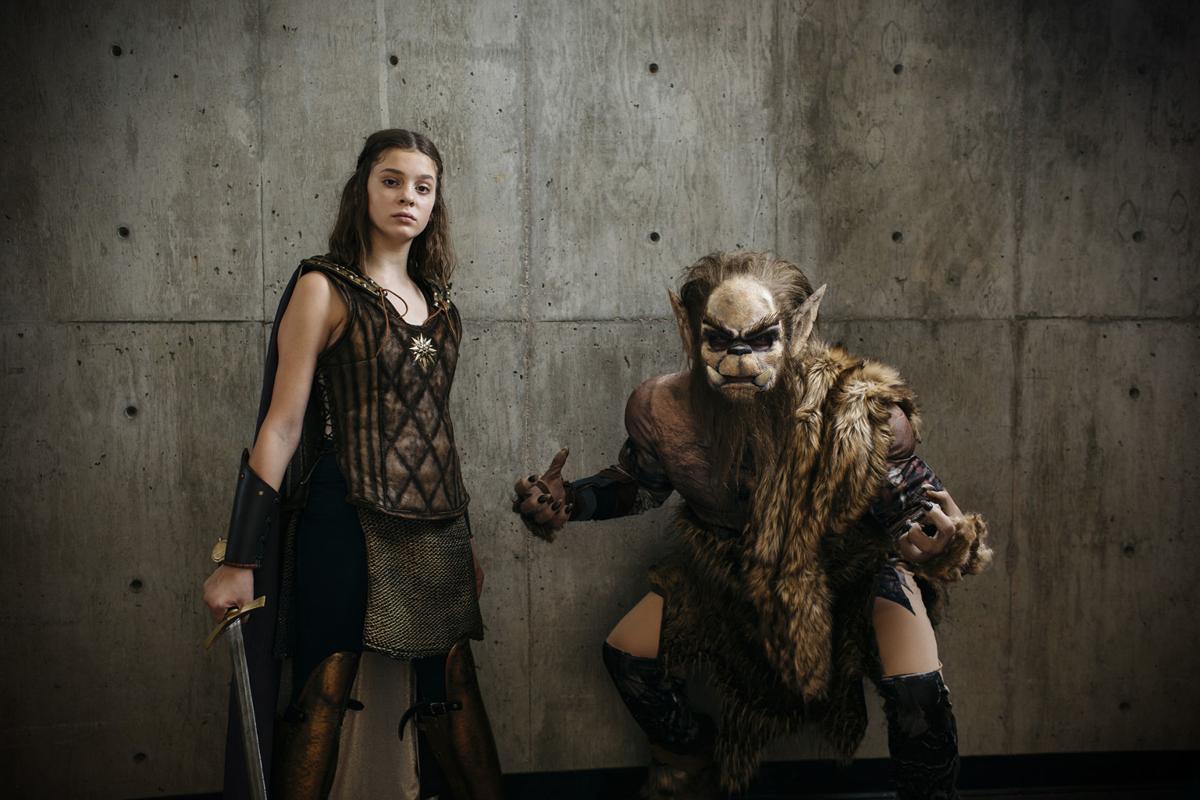 This play starts off with a bang and doesn’t let up. A beautiful juxtaposition of what’s real and what’s not, comedy and tragedy, answers and questions, is led by a young, energetic cast willing to go the distance. Director, Beth Thompson, current Shelterbelt Artistic Director, breaks out in her first turn at The Omaha Community Playhouse. Thompson quickly found her directorial voice on a new stage  through fearless choices with major payoff. Casting age appropriate youth actors was a marvelous choice, and finding spaces within the text for breath, and thought–a chance to gather everything we’ve learned, makes this a surprisingly cathartic ride. “I am excited for the audience to come in expecting one thing and walking out with something else. Yes, you will get your 90’s nostalgia and D&D lore but if you are really paying attention you will see yourself in someone up there. Most likely Agnes as we all have demons to face.”

Catie Zaleski’s, Agnes, is the emotional core of the show. Awake and grieving in the play’s reality, we watch as Agnes faces seemingly insurmountable challenges with resolve and a sense of humor. In the plays most poignant moment it is Zaleski’s onstage grace and believably that takes us so willingly on her journey.

Carrie Beth Stickrod and Brendan Brown were absolute scene-stealers. Stickrod was a riot as Vera, Agnes’s best friend and co-worker–a horribly hired student counselor. Stickrod’s natural ability to chameleon into character is one of my favorite things, every time I see her on stage. A great attribute when she becomes Farrah, an evil Fairy with some serious powers.  Brown is new to me, having missed his turns in other OCP performances, but I can’t wait to see him again. He plays in integral role as Chuck, the D & D DM, and close friend of Tilly’s. Chuck is an eager, insecure and hilarious nerd, who brings home the laughs as Agnes’ sidekick in “role-playing”. Brendon, made Chuck’s personality and innuendoes heartwarming and unforgettable.

Kaitlin Maher sets the tone as the story narrator. Thomas Gjere was Miles the caring, gelatinous mold aka boyfriend. Ava Burk and Amanda Overfield were spot on as mean girl succubi. Will Rogers was Steve, an easily defeated hero. Jaiden Lindsey and Riley Perez played Kaliope and Lilly, Tilly’s badass warrior sidekicks. And an unrecognizable Kevin Goshorn was hilarious and weirdly lovable as the giant demon with a screen addiction, Orcus. 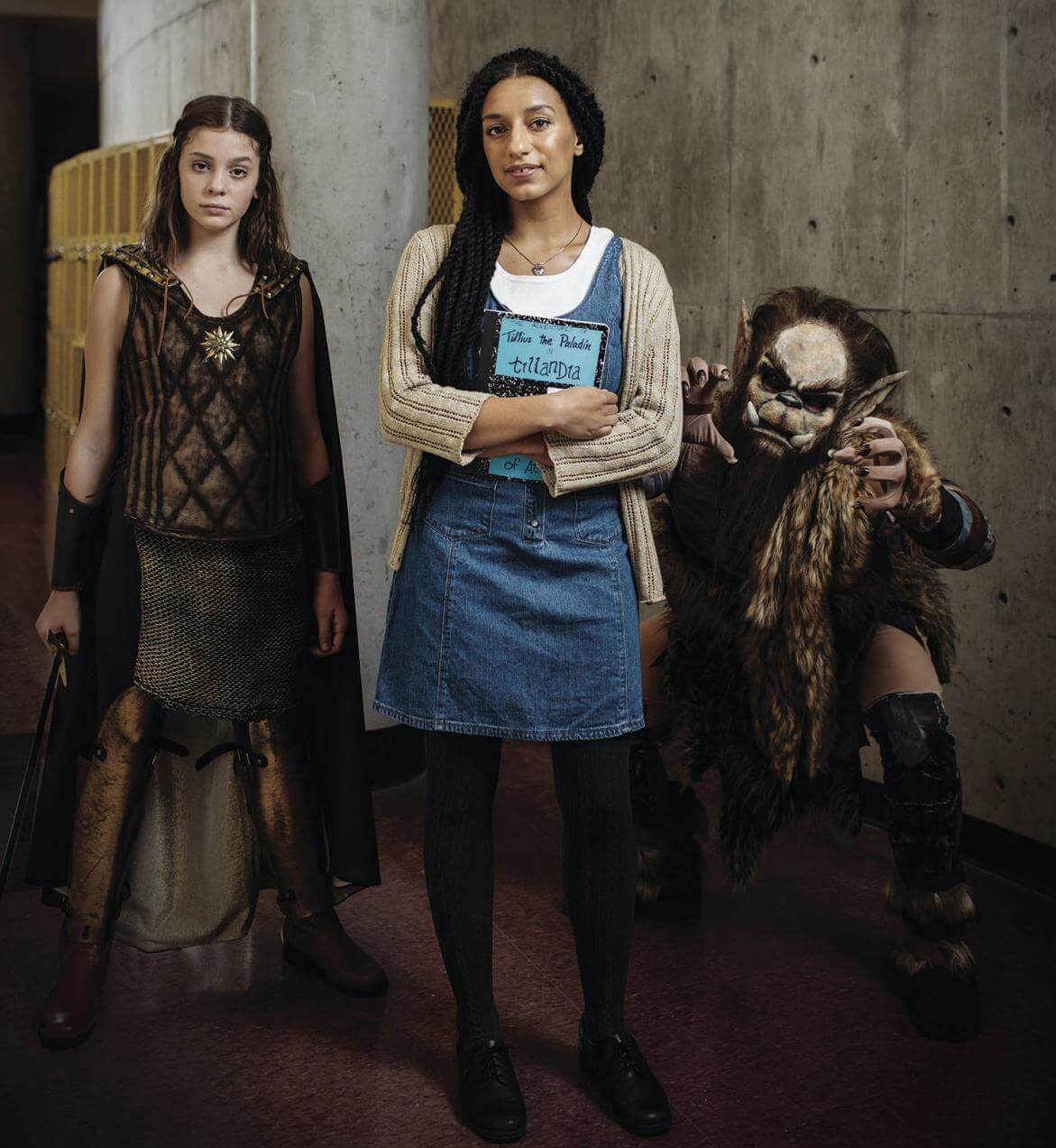 I can’t accurately review this show without mention of the amazing technical achievements. Amanda Fehlner deserves her own standing ovation on the wildly creative and authentic costumes she built for everything from violent princess armor to a giant fur-covered demon. The constant barrage of monsters never dulled, as their re-entries were always freshly masked and surprising. Darrin Kuehler, who designed props created a beautiful room of oddities and ends, some ferocious looking weaponry too. And Christopher Dills interesting two story set, equipped with rope swing kept the action and the eye moving.

Speaking of action, Amy Schweid’s choreography left me speechless. I found myself leaning in, mouth agape watching these teenage warrior women fight monsters up and down staircases and all throughout the stage. I couldn’t help but smile because in all of the hard work creating these physical moments, the play, the fun, the childlike energy remained. And I think that’s essential to telling this story. Remembering to play.

In the end, this is Chloe Irwin’s show–her stoic and fierce turn as Tilly electrifies the stage, she maintains an intense glare, hero stance and calculated presence throughout. I couldn’t take my eyes off of her, eager to see her reactions to the world as I was to hear her deliver lines. She held onto Tilly’s humanity and revelations with humble integrity, enough for this world and the next.

She Kills Monsters by Qui Nguyen