Home » Stage » Cold Cream » She’s Having Nun of It 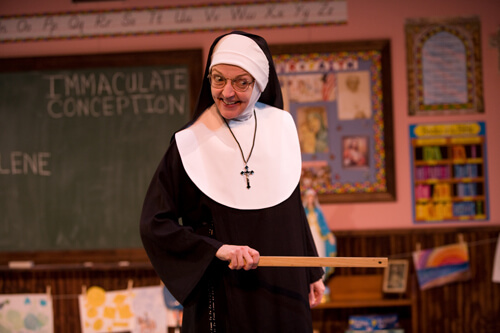 The Omaha Community Playhouse wraps up its 90th anniversary season with the return of Late Nite Catechism, featuring Mary Zentmyer in the role of Sister. Zentmyer has been performing as Sister for almost 20 years now, and this marks her fourth return to the Playhouse stage. She said she’s excited to be a part of the Playhouse 90th birthday.

“This year, I figure they brought me back because sister is at least 90 years old,” she said. “Sister’s been around forever. Nuns are ageless. They look the same as they did when you were in third grade. Sister was old then but she’s looks the same now if you met her.”

Zentmyer noted how show has evolved over the last two decades. At first, audiences were mostly Catholic adults reliving their school days of years past. But more and more, she’s noticed theatre goers of all walks of life attending and enjoying the show. She said one thing has changed for sure.

“Technology is the bane of my existence,” she laughed. “What I have changed the most for are cell phones and people texting during class. People’s laps glow during a play. They don’t put the technology away so I will confiscate it, I will take it away. I’ve had to kind of roll with the punches on that. I will talk to people on the phone during the show. I’ll have them apologize. We’ll put it on speaker phone and have them say, ‘Please excuse me for disrupting the class’. It’s very funny when you just got with it.”

Late Nite Catechism is described as Loretta Young meets Carol Burnett. It’s part catechism class, part stand-up routine. You, the audience, are part of Sister’s class. She’ll take you back to the days of the Latin Mass, meatless Fridays and remind you about the good old ruler across the knuckles.

“A lot of the schtick is the audience interaction,” Zentmyer said. “You’re back in school, I’m the teacher, you’re the class. The other character in this play is the audience. Some nights, if they have a few too many beverages before you come to class, it can get a little rowdy. But it’s worse not to have anything. If people are afraid and they sit there too well behaved, I don’t have a lot to work off of. It’s that middle ground that I’m always seeking.”

Zentmyer said the funniest moments in the show are the true life stories that people tell to Sister. It’s an important element to the show for her, seeing people take stock of their lives and smiling at the craziness of their past while looking toward the future with a comedic eye.

“I think people have learned through the years that you have to be able to laugh at yourself,” she said. “The show pokes fun, but it pokes gentle fun. It’s not mean-spirited. I think that’s why I like it show much. Sister is strict, she’s tough, no nonsense, zero tolerance for shenanigans, but she’s fair.”