In the program notes to Brigit Saint Brigit’s production of Bold Girls there is a brief statement from the author Rona Munro describing how and why she wrote this play. At the end she states, “I don’t think the battles women fight or the daily struggles they have are different to those in any other area with bad housing or high unemployment except that guns make a difference to everything. But this isn’t a story about guns. It’s the story of four bold women.” Her statement sets the tone for this play. Yes, it is set in Belfast, Northern Ireland with everything that setting implies. There are guns. The men are all in jail or dead. There are police blockades and stories of arrests and defiance. But in the end, it really is a story about four women who find a way to live their lives in circumstances that are not ideal. This story transcends its place and time because it’s a story about women, their friendships, and how they learn to survive in a world that is often unkind, and almost all women can relate to that. 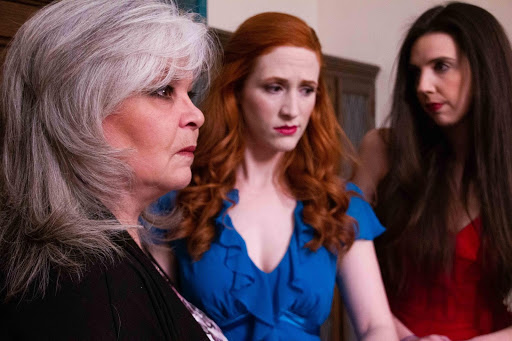 This particular production focused on the relationships of the women and allowed the four actresses to shine in their roles. In order to do that, the set was a simple home that evoked the dinginess and basic utility of a working-class home in 1990’s Northern Ireland. The costumes too are reminiscent of 1990 when jeans were bigger and yet shorter at the same time (a style that seems to want to return!). All of those pieces helped to set a distinct time and feeling for the play, but they didn’t detract from the vibrancy of the characters. And these women were vibrant. Melissa King, as Marie, is the motherly figure. She wanders about cleaning up toys, making tea and sandwiches, finding crisps, and washing dishes. Her demeanor exudes calm, naiveté, and an unwillingness to recognize that not everything is so warm and cozy. She seems to live a life where the edges of reality are fuzzy. Whether this is a choice or she honestly believes life is the way she sees it remains unclear. That is what makes her change at the end so meaningful. King’s portrayal of Marie as a woman who somehow lets everything roll off her is pitch perfect. It is all the more powerful when the audience finally gets to see the crack in Marie’s walls. There is a steeliness there that was unrecognizable until the moment Marie needed it. King’s Marie is full of power; there is strength in her unwillingness to acknowledge the harshness of the world she inhabits. King’s quiet strength and optimism is the heart and soul of this play.

Cassie, played by Amanda L. Charles, is the best friend who you also kind of hate. Cassie is bitter about the restrictions her family and living in Belfast places on her life. Charles skillfully plays Cassie as fun and wild, yet depressed and frustrated. Cassie’s choices often seem shallow and selfish and if it weren’t for Charles’ ability to play Cassie with such heart you wouldn’t be able to love–or forgive Cassie. Her main foil, Nora (Charleen J. B. Willoughby) is the harping mom. She won’t forgive Cassie for not protecting her or being the perfect daughter. In consequence she is always nagging Cassie and their fights are epic battles that only a mother/daughter can have. Nora is tough. She has been through a lot. But she chooses to put most of that aside and find joy in what she can have. Willoughby knows how to find that balance between a tough mother and a woman who just wants nice drapes to finish off her living room. Her character is still stuck in the definition of a woman from the 60s and this worldview is where the conflict between Nora and Cassie truly exists. As all of the actresses in this play manage to do, Willoughby gives us space to love Nora even with all of her flaws. 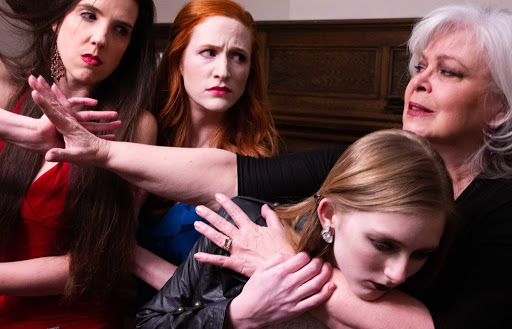 Finally, Deirdre, played by Emma Johnson, must be mentioned. It’s a smaller role and it takes time to figure out exactly what she is doing with all of these other women. She is played almost psychotically by Johnson. Her “I dare you to look away” stares into the audience during her monologues and her fascination with the power of a knife will be the chilling moments you can’t quite get out of your mind long after the play is over. But her character does have a purpose and the interplay between Deirdre and Marie continues to reveal the many layers of women. Even as a softness and heartache is revealed about Deirdre, Johnson imbues her character with such intensity that her presence on stage is tough to forget.

Ireland is a country rich in stories. This play is just one of those stories. It’s about the power of women. It’s about their beauty. It’s about their strength. This particular production has found four impressive women to remind us, once again, that women are deeply human, flawed, and yet worthy to be celebrated.

Bold Girls is playing at Brigit Saint Brigit from Feb. 22 – March 10 2019. Tickets are $30 general admission, $25 Students/Military/Seniors and $10 Student Thursdays. You can reserve tickets online at https://www.bsbtheatre.com/boxoffice or call the box office at 402.502.4910