Home » Stage » Cold Cream » Three To Beam Up is Out of This World. 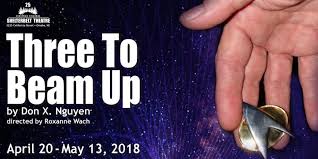 Calling all “nerds” and “non-nerds” alike- Three to Beam up by Don X. Nguyen is a night of sci-fi and fun at The Shelterbelt, you won’t want to miss. Following the story of two siblings as they search for their missing father (on a spaceship that’s actually a holodeck), this piece is both hilarious, and full of heartfelt sincerity.

From the moment I walked into the space, the mood was set. The entire production was an example of what can happen when designers, directors, cast and crew are all working together. Even though the action took place over a variety of different locations, using clever sound design, lighting design, and staging, each location felt distinct and real.

The sound designer, Shannon Smay, built incredible swells in action and emotion by adding subtle, scoring underneath many of the scenes. The ambient hum of a spaceship made me feel like I was not on planet Earth. Set Designer Ben Adams knocked it out of the park, once again. The small space was completely transformed, leaving it feeling open, versatile, and unique. The stage came complete with automatic, interlocking doors. The costumes (designed by Erienne Wredt) were some of the best I have seen at the Belt–Cohesive and clever and perfect for the piece. Director Roxanne Wach created a steady and exciting pace, and Stage Manager, Mary Beth Slater executed the entire show flawlessly.

A rather stellar cast was assembled for this trek. Meganne Horrocks Storm and Matt Karasek were full of strength and poise as First Officer Reese and Lt. Mullen, Kevin Goshorn added some comedic depth with his paranoid Witherspoon, and Pamela Chase was an appropriate mixture of robotic and sincere. Next to these veterans, there were a variety of new and exciting faces as well. Brennan Thomas (John Wisher), Nathan Dunham (Sam), Willa Rauch (Red Shirt #2), and John Havercamp (Red Shirt #1), all did wonderful jobs. I most enjoyed the debut performance from AJ Storscher. She had an easy knack for comedic timing, and traversed a complicated character with charisma and grace. New to the Omaha theater scene, I imagine there will be quite a few more impressive performances from her in the future.

While there were some moments in which I felt like I probably should have watched Star Trek a little bit more before coming, they were rare, and didn’t interfere with my ability to enjoy this 90 minute voyage into the deep space of family, adventure, and learning to laugh again after loss.