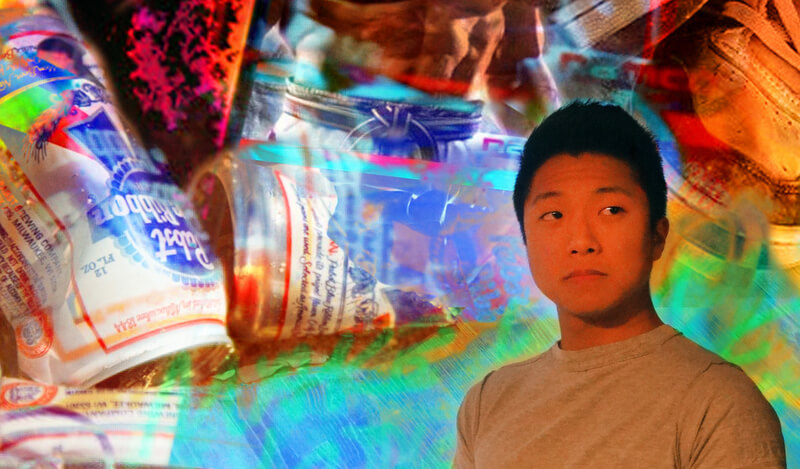 This is the last weekend to catch the latest show at the Shelterbelt Theatre, In the Jungle You Must Wait by local playwright Jeremy Johnson. The play revolves around several different employees of an insurance company who are forced to find meaning in their lives as they try to save one of their own. What makes the show unique is the interesting blend of satire and slam poetry performed by the characters on stage. Johnson got the idea for the show a number of years ago when we was working as a janitor. In his downtime, he would sit in the janitor’s closet on a pile of paper towels, scrawling different ideas and voices of characters down into his notebook. Soon, different characters started to appear in his writing and when Johnson started making those characters talk to one another, the conversations led to the play in its current state.

“The fun thing about these seemingly benign conversations is that, beneath them, they’re layered with these rich, dense, intense emotions,” Johnson said. “Loneliness, desperation, the fear of quiet. Those are the things that really interested me so I started to flesh them out.”

Johnson submitted the play to the Shelterbelt Theatre, Omaha’s community theatre dedicated to showcasing new and local works. The Shelterbelt’s Artistic Director, Beth Thompson, gave the show a workshop staged reading, called Before the Boards, to gauge audience interest and find the next step in the play’s development.

“It was one of the first Before the Boards,” Thompson said. “It had some really great feedback. We had a ball working on it. What attracted me to it was not only the storyline, what happens to these characters, but also the slam poetry element. Louder Than a Bomb and slam poetry seems to be really hot in Omaha right now. I was excited about exploring that art and the way that they integrate themselves together.”

To help the cast tackle the slam poetry elements of the show, Thompson brought in members of Omaha’s local slam poetry scene to practice the performative nuances of the genre. Johnson said blending the two performance arts gave each character intriguing complexity.

“The actors coming in, most of them have never done slam poetry at all,” he said. “Letting them come in and give themselves and what they found in their characters over to the poems has been really cool to see flourish into something new, something I certainly didn’t see coming.”

For Johnson, the whole process was worthwhile when he watches actors and audience members embrace a script he wrote in a broom closet.

“I really want to write pieces that enable actors to have the most fun as possible,” he said. “Whether that be a protagonist role or just that one weird character that shows up for a couple of scenes and then leaves. I want the actors to have fun doing that. The slam poetry aspect allowed me to bring the character out of that particular reality to just go crazy for a poem or so and then sink back down.”

In the Jungle You Must Wait by Jeremy Johnson will finish its run this weekend, performing through May 10th. For more information on the show, visit www.Shelterbelt.org.