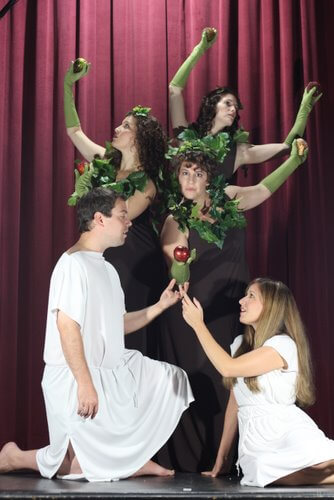 I don’t want to spoil the suspense if you’re attending Children of Eden this weekend at the Bellevue Little Theatre, but I suspect you know how this one comes out.

Maybe director Julian Adair has a few tricks up her sleeve, but I’m afraid Eve’s apt to let the serpent talk her into eating the apple and Adam won’t have much luck when he tells God to blame “that woman you gave me.”

There’s no hint in any of the advance publicity to suggest that the first couple will be Biblically correct by appearing nude in the opening scenes, but that could be BLT discretion to avoid accusations of titillation. Maybe they’re wearing fig leaves from the get-go, implying that shame set in pre-snake.

If the story is familiar, it’s a chance to see a promising cast in a musical new to Omaha by driving to downtown Bellevue, starting with a Thursday night preview,  then running Sept. 16-Oct. 2, at one of the rare theaters still beginning shows at 8 p.m.

You’ll hear more about this one next week, but Unbound Perspective opens the musical Crazy Just Like Me next Wednesday, so here’s a quick heads-up.

And it’s free with participants invited to attend at any time during the day and stay “however long you like.”  One station will provide resume critiques, posting good and bad examples.

Workshops range from puppetry to dialects, including “an interactive exercise in Standard British,” from sound and lighting to scenic painting, including demonstrations by “one of the top scenic painters in Omaha.” Call Marsh at 402.553-4890 ext. 135 or visit lmarsh@omahaplayhouse.com.

Cold Cream looks at theater in the metro area. Email information to coldcream@threader.com.