Home » Stage » Cold Cream » ‘Woolf’ is a Beast of a Challenge 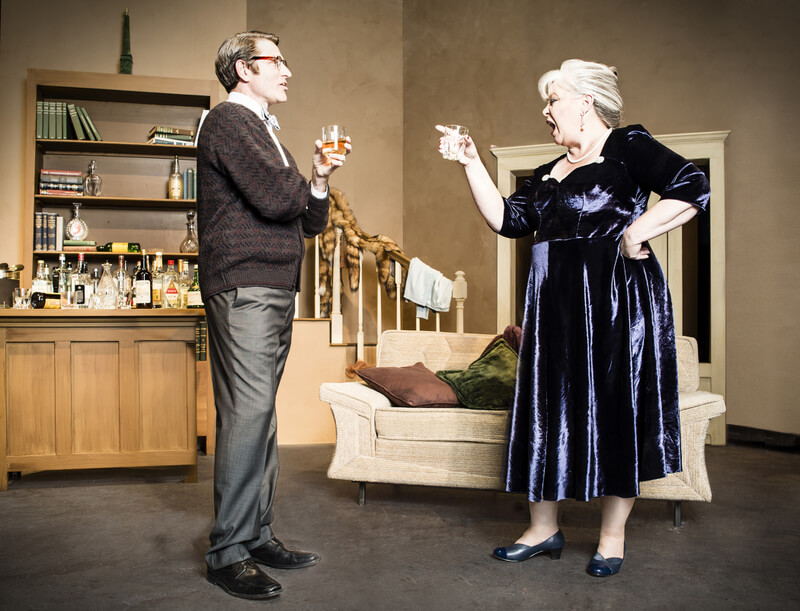 One of theatre’s all time masterpieces, Who’s Afraid of Virginia Woolf by Edward Albee, runs in the Omaha Community Playhouse’s Howard Drew Theatre through June 7th. The play revolves around George and Martha, an older couple whose marriage is falling apart. When the couple invite their young friends, Nick and Honey, over for drinks, the younger couple becomes pawns in George and Martha’s cruel games. For Charleen Willoughby, the actress playing Martha, the chance at performing Albee’s classic was a goal she set once the Playhouse’s announced its season. She’s prepped for months leading up to the audition and, as luck would have it, landed the iconic role.

“And once that happened, then the fear set in because it’s a monster of a play,” Willoughby. “It’s an absolute monster.”

The challenge in performing Virginia Woolf lies in mastering Albee’s iconic rhythm. His use of pauses and changes of pace provide a great challenge of discovery for performers over the course of a rehearsal period. For Willoughby, the biggest challenge laid in harnessing Martha’s volatility.

“Martha’s very strong, but Martha is also extremely vulnerable,” she said. “Trying to keep the strength but allowing the vulnerability through is very difficult. But also the turning on a dime. Throughout the entire play, her intentions turn. With the snap of a finger, she’s screaming and yelling and then she’s being seductive and playful. It’s all hiding the hurt and the frustration that she has in this marriage with her husband, George.”

Adding to this challenge was the fact that Steve Hartman, playing the role of Nick, was added to cast very late in the game, replacing an actor who dropped out of the production. The entire ensemble worked tirelessly to find their rhythm with one another up to and through the show’s opening weekend. Once the show opened, Willoughby discovered something in the audience’s reaction to the show; the underlying comedy in the character’s relationships.

“We’re taking all of this very seriously and that preview night audience just roared with laughter in places that we had no clue,” she said. “I mean, there’s always some places you think ‘That might get a laugh, a chuckle,’ but they just laughed throughout the whole thing.”

Willoughby said the great thing about the show is how Albee’s words immediately capture the audience’s attention.

“The thing about Albee’s writing is that it draws the audience into the story,” she said. “From the very first five minutes, you are engaged. You are absolutely engaged in wondering, ‘What’s going on?’ As a performer, you don’t look at the audience, but in the Howard-Drew, it’s such an intimate space that you can’t help but pass your eyes by people and how many times the audience is sitting forward and really engaged with the action on stage. That’s very exciting for an actor.”

The Omaha Community Playhouse’s production of Edward Albee’s Who’s Afraid of Virginia Woolf will continue to run through June 7th. For more information on the production, visit www.OmahaPlayhouse.com.