Native Gardens is simply a very enjoyable, very accessible play, with a weak happy ending which should only bother viewers hoping for something more darkly realistic. 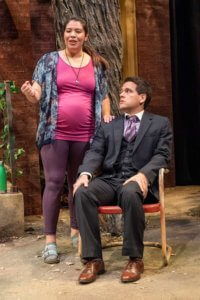 Another way to put it, by contrast with the Will Eno play now running at the Bluebarn, the Omaha Community Playhouse offering by Karen Zacarias is a mainstream commercial comedy but one that doesn’t ignore all that divides us in socio-political and cultural terms. It pairs two seasoned pros with well-honed comedic chops and two young performers who create convincing sympathetic characters.

Director Ablan Roblin guaranteed high laugh volume by casting Dennis Collins, a master of crusty curmudgeonly geezerness, and Mary Kelly as the Butleys, Frank and Virginia. They’re long-settled in their well-established neighborhood and proud of their backyard with Frank’s prizeworthy flower garden.

And Roblin scored again by bringing newcomers Giovanni Quezada and Alyssa Isabel Gonzales, playing Pablo Del Valle and Tania his pregnant wife, as their new neighbors. They look “Mexican” to the Butleys.  Actually, Pablo’s a lawyer from Chile and Tania’s a Ph.D. born in New Mexico.

After a friendly welcome, the Butleys discover that Tania doesn’t approve of their non-indigenous plantings and that’s where the title of the play enters the picture.  Tania advocates “native gardens,” not plants from elsewhere. To Frank, that means she prefers weeds.

The trouble begins when Pablo invites his entire law firm to a backyard BBQ and decides to take down what the Butleys agree is an ugly fence.  That leads to the discovery that Frank’s prize flowers are growing two feet into Pablo’s yard.

It’s not long before the property line dispute spills into some silliness and then finally to that sudden but predictable happy ending. But the script and the strong performances build enough good will in Act 1 of the 90-minute performance to make the weaker Act 2 enjoyable.

It works letting Collins be more of a sitcom caricature while Ms. Gonzalez is a more nuance neighbor, firm in her convictions yet wanting to be kind to the older couples. Collins expects the newcomers to see him a reasonable Republican. After all, “I considered voting for Obama.” And Kelly’s Virginia seems more willing to be tolerant, then turning petty by flicking cigarette ashes or pouring coffee in the birdbath.

Playgoers who’ve appreciated Collins and Kelly for years will add both of the younger actors to those they’d gladly see again. Both Quezada and Gonzalez show stage maturity that outshines their still limited credits.

Roblin’s aides in presenting the play in the smaller Howard Drew space ranged from veteran scenic designer Jim Othuse, challenged to divide two contrasting yards with a controversial property line, and new costume designer Jenn Sheshko. The entire production package lived up to Playhouse expectations and lends itself well to the close quarters of the Drew. 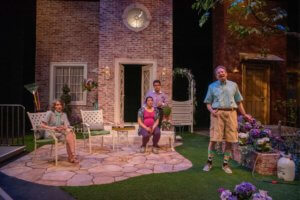 Some of the conflicts between the established couple and the newcomers touch hot points in the current divide, the likes of immigration, the environment and “otherness,” even walls. But, have no fear, there’s nothing likely to raise the hackles of the many of us who feel strongly, one way or another, about our Tweeter-in-Chief.

Native Gardens runs in the Howard Drew Theatre of the Omaha Community Playhouse, 6915 Cass St., with performances at 7:30 p.m. Thursday-Saturdays, 2 p.m. Sundays through March 15. Tickets are $36 adults, $18 students with some variations, and are available at omahaplayhouse.com or by calling 402.553.0800.