Doug and wife Laura Marr were among 12 founding members of the Circle, created in 1983 by a cohort of UNO theater grads and professors. The group enlisted Doug, then a poet, into writing an original work to perform. That play, Phil Contemplates Putting a Jukebox in the Diner, became an unexpected sensation early in 1984 at Benson’s Joe & Judy’s Cafe. It spawned a successful series of 11 Phil’s Diner plays Marr wrote and the Circle produced, even as the cafe changed hands. 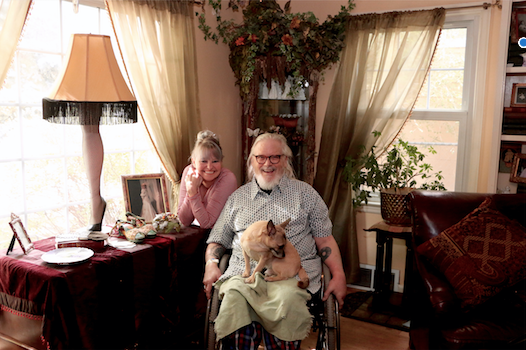 Marr went on to write many plays outside the Phil’s series, including Starkweather for the Omaha Community Playhouse. As Circle members dropped out owing to job and family commitments, the Marrs carried on, eventually moving the theater to Central Presbyterian Church and more recently, Urban Abbey. In 2016 the Marrs handed off operations to Fran Sillau, who joined the company in the late 1990s.

Now, Sillau and the Circle are reviving the play that started it all, with many of the original cast, for six scheduled performances at Harold’s Koffee House in Florence. Only this revival isn’t purely about nostalgia. It’s for a purpose. Show proceeds will help offset major medical expenses incurred by Doug after undergoing multiple surgeries the last two years. Omaha’s most prolific playwright is in need of a serious rewrite.

Most recently, a pressure wound got infected to the bone. That  necessitated surgery followed by weeks of rehab at a care center. In an interview at the Marrs’ midtown home, Doug sat at the kitchen table surrounded by medical bills. One alone totals $85,000. Medicare pays some but finding the rest on Laura’s teaching salary and what he makes writing is rough.

The costs extend to a regimen of eight prescription drugs he’s on. It’s all on top of being a paraplegic (he’s been paralyzed from the waist down since undergoing risky spinal surgery at age 22). Since then, he’s only been able to walk with the aid of crutches. The pressure on arms and shoulders bearing his full body weight blew out both rotator cuffs.

He’s never wanted pity, but to entertain us through his craft. He’s done it over and over again. Now that he needs a little help, he’s touched that his old theater gang is rejoining for the cause. They, in turn, are happy to do so. Reliving the most intense theater experience of their lives makes it all the better.

“Fundraiser aside, I think it’s amazing,” Marr said. “We’re hoping people in the Florence area will kind of glom onto this new experience.”

M. Michele Phillips. who’s directing the revival, said, “To bring it full circle is something that never happens because theater’s so ephemeral and when it’s done, it’s done, so this is totally cool. What was always nice about the Circle Theatre was the ensemble. The ensemble was always full of great people you loved working with.”

Michael Markey, who’s reprising the role of the mensch diner proprietor Phil he originated, said in rehearsals it doesn’t seem decades have passed.

“It’s just like we finished yesterday – the interplay, the shortcuts. You know what the other person’s going to say or how they’re going to react. All that’s there after 30 years. Bill Lacey (he plays Al the grouchy short order cook) I haven’t seen in 30 years let alone act with, and we’re right there.”

“It doesn’t take time to catch up and reconnect to people you were that close to, even though it was a long time ago,” Lacey said.

Then there’s the added benefit of everyone bringing more life experience to the material.

“This experience was very embedded in who I was as an actor,” Markey said. “I tend to believe it was probably that way because it was so different. It was so organic as environmental theater that it all came rushing back as soon as we started doing it again.”

Markey said there’s nothing like the intensity of creating theater together for imprinting things in you.

“There’s a trust factor that comes about from working with people over and over again. When we started this we were 12 people who had worked together in UNO and in other community theater who had built that trust, and we spent the first six months of the Circle just working on developing that truth and the improvisation and all that. So that ensemble was part and parcel of who we were.”

In a gender twist, Stan, the homeless philosopher has changed to Stella. Laura Marr, one of Omaha’s most distinguished actresses, plays her. Other characters include Daryl the savant dishwasher, Grace the sharp-tongued waitress and Rudy the jeweler.

Then as now, the players are an extension of the Phil’s Diner universe of neighborhood dreamers, schemers, working stiffs and misfits whose stories Marr explored.

“It had that feeling of an extended family where Phil kind of took in all these different characters over the years,” Marr said. “He was kind of their father in a way.”

The verisimilitude increased placing the actors of these archetypal diner denizens in an actual eatery.

“Because I think part of what the whole experience was with diner theater was to be surrounded by the play in this natural found space,” Laura said. “It gave a really interesting feel as an audience member and as a performer. You can produce the play just as a play but to actually mount it in a setting like this opens a new generation up to what found space theater is and to the possibilities of it. It’s very different doing it that way then doing it on a stage. It requires a different type of style, awareness of the audience and a whole lot of things as a performer.”

When Phil’s Diner debuted, it was a first for area theater.

“It was an experiment the first time we did it,” Markey said. “We only planned on doing it one night. We’d see if anybody came and what they thought because it hadn’t been done before, and the response was so electric it was like, ‘OK, this will work.'”

Until, then, Lacey said, “We didn’t know it would work – we really didn’t.”

What made it a must-see?

“It was so unique to go to a diner and see a play, so there was the novelty aspect of it,” Phillips said.

“Doug created a wonderful slice of life of people you run into, talking the way they talk, being who they are, and you’re just sitting in amongst this group of people you can completely relate to,” Markey said. “Doug’s writing is so earnest – it’s who he is. He causes us to look at the people around us and embrace what’s good about them. What’s good in us comes out because of them.”

Putting on the plays created lasting bonds for this cadre of University of Nebraska at Omaha thespians.

“A group of us from UNO had decided that after we graduated we really wanted to work where we live, instead of live where we work,” Laura Marr said. “We didn’t want to necessarily go off to New York or L.A. if we could try something here and it could be successful.”

The Circle was formed at the Marrs’ wedding reception. To everyone’s surprise, Laura recalled, the theater was a hit right out of the gate. “We had no idea it would so quickly become self-sustaining and a viable medium for us.”

“We really went through a lot of things together,” she said. “Even if we don’t see each other for a long period, anytime we get together we just pick up where we left off because we’ve shared so many experiences. That includes our college years when you really start to figure out who you are and what you want to do and what you believe in. When you have a core group of people that comes together with those very strong themes and you create something together, I don’t think that ever goes away.”

Doug Marr, who only penned that first play because he was the group’s lone writer, said he soon discovered his calling. “I found my voice – I found the way I could express myself.” The sold-out shows, he said, “really blew me away.”

“Before the word inclusive was even a thing, they lived it, they embodied it,” said Fran Sillau, who himself has a disability, “and that didn’t happen everywhere. It was a very special place with very special people.”

It was Sillau’s idea to revive the first Phil’s Diner. Marr was to write a new one but got sick. He intends finishing it yet. “It’s going to be years later – with a lot of the same characters,” he said.

Michael Markey feels there’s an advantage to doing Phil Contemplates first because it gives the ensemble a chance to rediscover the characters with a piece they know and introduce new audiences to diner theater.

“Now we have the foundation for the reunion piece.”

Marr has no problems reengaging with his Phil creations. “They were such a part of my life. They’re attached to my soul. They’re like real people to me.”

Laura’s grateful the work and theater have a new life. “I think that’s the whole purpose of starting something – to see it continue. It’s so interesting to see it from a different perspective because when you’re in the day to day workings of something it’s very hard to be objective about it. With Doug’s health issues over the past two years, it’s really been a relief to us to have someone as competent as Fran (Sillau). He’s got very good vision and some great people supporting that vision. He’ll move the organization in new and exciting ways.”

For the Marrs, it’s nice having a finished script and someone else put up the show.

“It’s not like the old days where Doug was producing so much work and the work was so popular we would start rehearsal on a new one while we were still in production on on,” Laura said.

She feels the Circle’s endurance might explain why other grassroots theaters appeared here.

“We had a big influence in the emergence of all of these little theaters,” she surmised. “They began to pop up and stay and do very interesting original work.”

“It gave everybody the courage to try it,” Michele Phillips said. “These guys actually accomplished it. That was exciting for everybody in the theater community.”

Giving back to a local theater icon, Phillips, said, “gives everybody impetus to do a really good job because there’s no more dedicated theater practitioner than Doug. Just getting around is such a struggle for him,nbut he’s never late, he’s always on top of it.”

“He’s an inspiration –  that’s why we do it,” Sillau said. “Thanks to him I learned that someone with a disability could make what you want out of your life.”

“It’s a great opportunity to say thank you to Doug and Laura for keeping the theater alive,” Markey said.

Doug Marr appreciates it all, even though some days the pain is just too much. Like Phil and the bunch, he remains hopeful.

“I mean, there’s going to be a point in my life when it all crashes down … cause it’s just going to be too difficult, but right now I can’t not keep going. There’s still challenges out there, there’s films to watch, books to read, and also it’s a good time to start working on getting things published, like Starkweather and some of the other pieces I’ve written. Even the Phil’s Diner series. They have to be totally rewritten on the computer, but I’ve got time.”