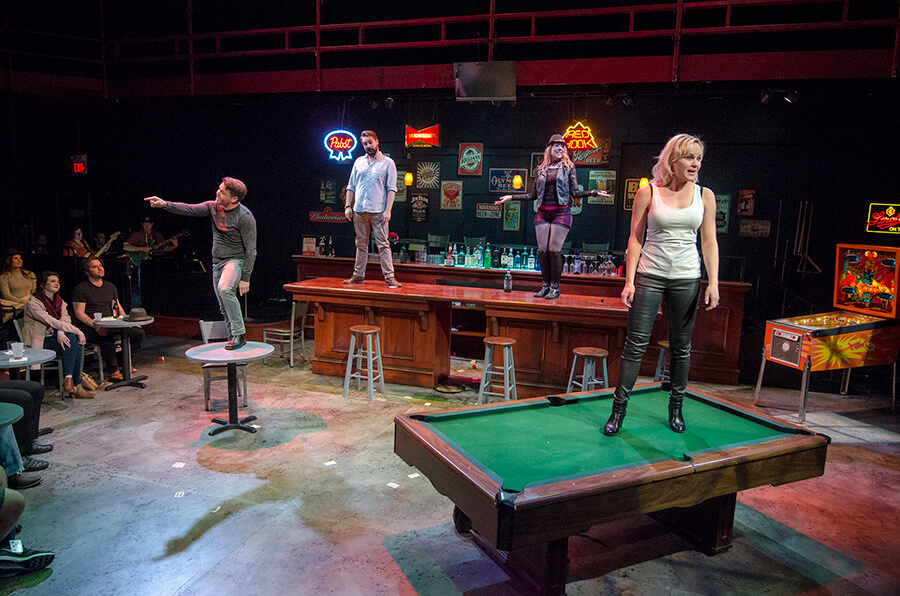 What happens when you trade a booze-soaked, fast-lane existence in a seedy SoHo bar for the safety and security of the tony Upper West Side?

Murder Ballad, the sung-through rock musical now playing at the Omaha Community Playhouse, is a sexy, high-energy, incredibly fast-paced blur that careens through its 83-minute playing time like the cast was double parked.

Sara (Leanne Hill Carlson) is a nocturnal creature who haunts the blowsy bar tended by her abusive, bad-boy lover Tom (Thomas Gjere). Their steamy relationship is a troubled one, and when Sara falls for Michael (John E. Jones), she says goodbye to the Downtown scene for the comfort and stability of an Uptown life. But she soon tires of her pedestrian, doorman-butressed world and runs back to Tom.

The story is propelled by a Greek chorus of one, the spicy, leather-and-lace Narrator (Mackenzie Dehmer) who employs a recurring motif of dealing a deck of cards as a allegory for decisions we make that can lead to our undoing.

You’ll want to go early for this one so you can mingle with the cast and have a drink at the bar before the audience seamlessly melts away after last call and Music Director / Conductor Doran Schmidt’s house orchestra (again only four) strikes up the band.

Dehmer’s throaty, throbbing vocals and tough-girl vibe advance the plot, but it turns out that the Narrator in this musical is more than just a disembodied cipher. Gjere is terrific in a role that balances menace  with melancholy. And the sweet-voiced Jones, who plays the only easily likable character in this dark work, is spot-on as the jilted husband.

But no matter how fine this cast is, Murder Ballad belongs to Hill Carlson, one of the city’s go-to leading ladies of musical theatre. Hers is a fierce, visceral performance as pathos battles pleasure in a conflicted woman who doesn’t know what she wants but will do anything for love.

While the performances, direction and music were flawless, there is perhaps one small rub. It comes at the climactic 82-minute mark and left me scratching my head just a bit. Do the creators of this rock opera give the audience enough information to make sense of and fully understand the … well, it’s called Murder Ballad for a reason.