I’ve spoken many times before on the inherit politics of theater.

From its very beginning theater has served as a way for the “voiceless” to be heard, for the powerless to build an audience and for the people to undermine, challenge or rail against the powers that be. Art in and of itself is a place for free thought. Theater plays by its own rules, unyielding to the pressure of other power structures. Forgoing race, age, social status, etc., theater is for everyone: That’s what makes it dangerous. It will not be shut down, censored or told to be “good.” Plays often derive from personal experience or connection to the subject, and writing can serve as a coping mechanism, a survival tool, a way to right a wrong. More truth – deep, personal truth — can be found in the pages of theatrical works of “fiction” than in many other sources, I’d argue.

This fall, as Brett Kavanaugh’s name and college debauchery became household, millions of women across the nation returned to dark places in their minds, in their collective mind. Listening to the searing testimony of Dr. Christine Blasey-Ford mobilized many women to fight back against an increasingly apathetic, if not hateful governmental regime, one that refuses to take women seriously, despite the large percentage that voted for them. Too many women have faced the kind of abuse Dr. Blasey-Ford testified against for this to NOT be A Moment. A Moment that most certainly includes theater artists and our powerful attention to empathy and the human condition.

Playwrights respond to the world around them through their written work. Timely and historically repetitive occurrences are often challenges accepted through art – art takes up the mantle of history all the time. It’s a way to solve a problem, incite more dialogue, or figuratively slay the dragon. The current discussions surrounding rape culture, the #MeToo movement and the onslaught of Hollywood heavyweight takedowns have compelled many artists who are also assault survivors to tackle their stories on the page. Alyson Mead, is a Los Angeles based playwright who turned her anger into action. She put a call out on a massive Facebook community of women, trans, non-binary and female identifying theater professionals across the country. The call was brief and powerful: “Today, in honor of women’s bravery, I’m offering this as a one-time deal. If you have a theatre company, or want to put together a reading over the next few weeks to 100% benefit #MeToo, contact me. I’ll waive royalties.” The response was as ardent as the offer, with artists from all over clamoring to take Mead up on her offer. Not because it’s free, or easy, but because it’s important. It’s what we can do. It’s what we’re called to do. It’s what we must do.

Here in Omaha, director Amy Lane Head of Theater at Creighton saw the post and immediately knew she wanted to be involved. “It resonated with me because activism through the arts has become an increasingly central part of my career. It seems in the face of our current political climate that talking is not enough, that action is necessary. As theatre artists we have the power to create community dialogue, to actively engage in an issue, to tell stories that matter, to engage empathy and inspire change.” Along with veteran designers Steven Williams and Valerie St. Pierre Smith, Beaufield Berry-Fisher producing and Beth Thompson signing on as Assistant Director, Lane put out a casting call to nearly all of the working women actors in Omaha.

“My hopes were initially to gather a group of actors who felt as passionately about the topic as I did. Omaha performers exceeded my expectations. The response was overwhelmingly positive. It probably shouldn’t have surprised me, MeToo and the issues surrounding the Kavanaugh hearing affected so many, and so many are ready to say enough.”

With special permission from the playwright, the Omaha team decided to put on three performances total, in hopes to reach a larger audience in Omaha’s segregated grid and to “spark some dynamic conversations about how we as a community can address harassment, assault, inequality, etc. by providing a safe place to share,” Lane adds.

Although Alyson isn’t local to Omaha, being able to bring her powerful play and words to our local community is a generous gift. Where so many writers work hard to earn their livings, to offer that work for the benefit of others is an incredible testament to how much sharing this piece means. When people say that “theater can save lives”, this is the theater we’re talking about. The performances are all open to the public, with a $10 suggested donation. Give more or less, whatever you can. This means there is great opportunity for someone in that audience to experience some healing, catharsis, and an understanding that they are not alone. I wanted to share some insights from our playwright on why she felt moved to donate her work in this way.

What made your show so timely?

ALYSON: I was at the Kenyon Playwrights Conference when I heard about the Stanford rape case and Brock Turner. I remember sitting in the quad area of the campus, under a beautiful canopy of trees, and reading Emily Doe’s courageous letter, in a scene that may have been like the one she was in, right before she went to that party that night. I was so angry, and so tired of this. But I was also moved by her bravery and grace, and resolute to use what I had – my voice – to hopefully adjust something, move a needle, something. If nothing else, I could show how women are always cleaning up the mess after sexual assault, often in confusing, loving and sometimes messy friendships. Sometimes over many, many years. The title of the play itself is from something the nurses said to comfort Emily when they were examining her after the assault – another form of female courage and grace.

Talk about theater’s place in politics? Shouldn’t we just shut up and entertain?

ALYSON: I have so many thoughts on this – do you have a few hours? My thinking is that politics is part of life. And my mission is to capture what it feels like to be alive today. I don’t even say “politics” or “political” much anymore. I use the word “engaged.” To be engaged in our world today means, at some level, taking part in, and having opinions on, the stuff that shapes our social lives. That includes our elected leaders, their appointments, and legislation in general.

What’s been the response to your show nationwide?

ALYSON: In a word, amazing. I wrote the play really quickly after Kenyon, and it had a few readings right away that fall. Then it went on to win the Henley-Rose Award and the Bridge Initiative’s New Play Award, and I had a chance to do more development from there. Readings across the country followed, and those were great, and started to move us toward an Off-Broadway production. For this most recent iteration, I was so moved on the day Christine Blasey Ford testified in the Brett Kavanaugh hearings, and literally couldn’t stand it anymore. I jumped into a Facebook group that day, and offered to waive royalties if people agreed to donate all proceeds from the readings to #MeToo, over the next few months.

What made you decide to offer royalty-free readings across the country of The Flora and the Fauna?

ALYSON: It’s always the bravery of women or, in this case, one woman standing alone. Christine Blasey Ford didn’t have to do what she did. She didn’t want the attention, and it was clearly painful for her to dredge up such painful memories. Seeing her all alone in front of that microphone, facing a grim line of mostly male legislators, brought up so much for me – Anita Hill, especially. They’d even stacked the galleries behind Dr. Ford with Kavanaugh supporters, some of them women. I wanted her to know, so much, that she was valued, and needed, and appreciated, just as I did with Ms. Hill. I know people have made all kinds of gestures to thank her since then, but she’s not even able to move back into her home with her family. That has to change, and I hope that our readings of The Flora and Fauna raise money for an important cause, but also bring women together, to raise their voices and combine their talents to depict these complicated women onstage.

This show features the magnetic work of 18 of Omaha’s most talented actors: 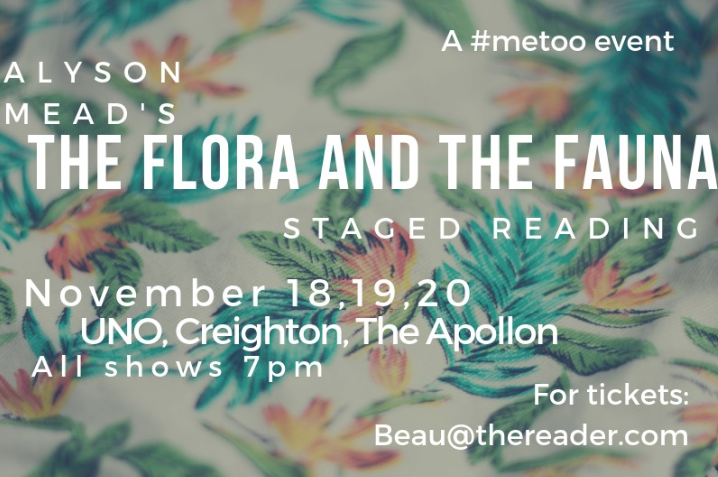 The Flora and Fauna can be found onstage in Omaha on Sunday Nov. 18 at The Performing Arts Center at the Union for Contemporary Art (24th and Lake), Monday Nov. 19 at UNO’s performing arts center and Tuesday Nov. 20 at The Apollon Artspace (18th and Vinton). All shows are at 7:30p.m. and there is a $10 suggested donation. All proceeds from the show go to supporting victims of sexual assault through the MeToo movement. For more information please email Beau@Thereader.com and check out our FACEBOOK EVENT.

If you are interested in becoming an event sponsor, please contact Beau@TheReader.com. For more on #metoo visit www.metoomvmt.com and for more on Alyson visit: Alysonmead.com