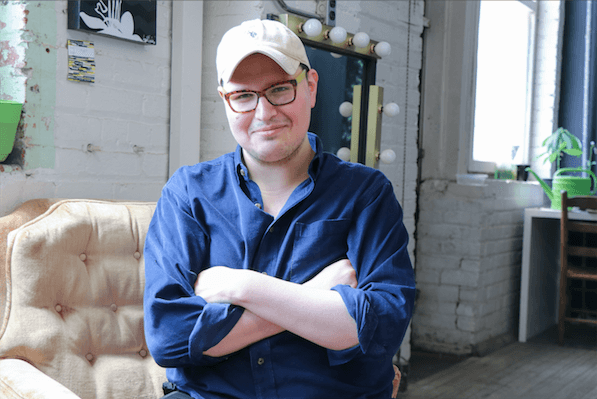 Noah Diaz proves there’s no prescribed way to follow your passion. In 2017, the Council Bluffs native and Omaha theater darling received a full ride scholarship to the prestigious Yale School of Drama without majoring or even minoring in theater as a UNO undergrad.

He’s already a rising star in Yale’s vaunted graduate playwrighting program after winning accolades for acting and directing here. Though he didn’t formally train locally, he said, “I’ve received so much second-hand training from the people I’ve worked with over the years. I’ve worked with a staggeringly high number of talented people on stage and off. I have mentors, big and small,” said Diaz, who’s been home over the summer.

“In many ways I was raised by my mentors from whom I received theatrical and life lessons.”

Feeling he already had theater covered, he studied special education and communication disorder and creative writing at the University of Nebraska at Omaha.

Meanwhile, his play The Motherhood Almanac opened theater doors for him here and outside Nebraska. The Sheltebelt staged it. He did a residency with it at the Seven Devils Playwrights Conference in Idaho. Two New York City theater companies workshopped it. Encouraged by fellow playwright Ellen Struve, he applied to name graduate theater programs. Like a feel-good turn in a play, the one school he assumed he had no real chance at accepted him into its illustrious ranks.

“I thought it was never really going to happen for me,” he said. “It was hard not to recognize what kind of capital ‘I’ institution Yale was and how impenetrable it appeared. But there actually seemed space for me there

and then it was space I was heartily welcomed into.”

He learned of his acceptance on his mother’s birthday.

“We had already planned having a dinner that night with the extended family. My mom said. ‘The only gift I want is to share the news myself with everyone.'”

His first year in New Haven has been “astounding” and “profoundly rewarding.”

“It’s a really intense program. We don’t have many breaks. It functions as a conservatory. We are often in classes six days a week from 8 a.m. until about 2:30 p.m. and then we’re in rehearsals from 2:30 to 11 p.m. It’s similar to how medical students are in classes and then go on their hospital rotations.

“I’m busy every day. I’m very tired. My mind was prepared but my body wasn’t. It’s a matter of gritting yourself and barreling through. In so many ways it was the longest year of my life and yet the shortest. It requires such exertion of energy, not just creatively, mentally or emotionally but physically as well. I wrote five plays over the year, one of which went up to a workshop production in the spring, in addition to many others I started and abandoned.”

His apartment is close to the venerable campus, which he said “reminds me of Hogwarts in Harry Potter.”

As an arts and letters Ivy Leaguer, his life is consumed by studies, rehearsals, writing and craft analysis.

“I live alone which is smart because I do a lot of writing and I need a lot of quiet. A huge challenge for me personally in this program is generating work so quickly and so frequently. I’m learning themes that constantly keep reoccurring in my work, what that’s telling me about myself, why I’m interested in exploring these things and what dramatic structures I keep leaning on.

“I have a lot of conversations with my colleagues about knowing the difference between what is a playwright’s voice and what is a playwright’s schtick. The difference, at least for me, is honing my artistic voice and not simply relying on the same bag of tricks. I’m proud of this first year body of work because I’ve tried things –    somewhat reinventing myself or at least challenging myself in new ways. That’s intentional.”

The work doesn’t all just stay on the page either.

“This particular playwriting program is a little unusual in that we are offered a production each year.”

“My second year production starts rehearsal the first day of classes or shortly thereafter, so I have to prepare options to present.”

There’s no shortage of stimulation.

“I’m working with incredible people in my cohort. They are so talented and smart. My faculty – Sarah Ruhl, Tarell Alvin McCraney, Amy Herzog, Robert O’hara, Jackie Sibblies Dreary, Young Jun Lee – are all luminaries still working in the field. It enriches my learning experience,”

With notable alums on stage and screen, the school is a recognized talent pool that industry producers, directors and agents scout. Diaz has already heard from some.

“I’ve been really fortunate that a lot of people have been reaching out. I’ve been taking meetings, I’ve been in touch with fantastic companies. This summer alone I’ll be at three different theater companies across the country developing my work.”

He was in Chicago for the Latinx Theatre Commons (LTC) Carnaval of New Latinx Work in July. This month his Richard & Jane & Dick & Sally is part of the Two River Theater Latinx festival in Red Bank, New Jersey and a workshop at The Lark in New York City.

Diaz said the example of other Omaha playwrights has emboldened him to forge ahead with his own career.

“Our community of playwrights inspire me. Because of all the people who’ve come before me, it never really crossed my mind that I couldn’t. I saw people doing it and I just always kind of had that feeling, Oh, when it’s my time, I will do it, too.”

“I hope that line continues.”

He’s not forgetting where it all started for him.

“I thank Omaha in so many ways for having prepared me and supported me. It’s really great to know they have my back. I plan to be back every summer for the Great Plains Theatre Conference.”

He was back for this year’s GPTC, where his star Yale prof, Sara Ruhl, was the honored playwright. He also had a reading of his You Will Get Sick at the Shelterbelt.

“There are not many places for playwrights to go and yet these playwrights continually write and persevere to tell the stories they need to tell. That tenacity and initiative to write in a town that isn’t always ready to hear the stories they do write is exciting to me.

“What I love about the playwrights in our community is that so often it’s not about accolades or attention but rather generating and creating pieces of art important to them. That’s something I try to do. I try to tap into whatever it is I personally need to tap into.”

One of his Yale plays, The Guadalupes, cuts closer to his life than anything he’s written. It explores questions he has about his own racial identity and his relationship with the Hispanic side of his family.

“It’s about my grandmother, my grandfather and my father and mother. It’s this deeply personal play about being both white and Hispanic and the irreconcilable differences between the two. It deeply affected me. It was well received, which was great.

“I think for any writer of any form the history that you carry will always seep into the work. But this one was directly about my family, so that was a first for me. I don’t know if l’ll be doing that again anytime soon, but I did get that one out of my system.”

As things continue moving fast for him, he takes comfort in the surety his Yale degree will mean something.

“We’re told that regardless of what you think your personal career trajectory will look like, you will be working in your chosen field. They’re not promising us Tony Awards or Pulitzer Prizes, but having gone to this university and through this program, I will be able to live and work and pay my bills as a writer.”

“That (prospect) is so fulfilling and rewarding to me.”