Home » Stage » ‘School of Rock’ Hits All the Right Notes

The best thing about School of Rock is that the musical gives you so many characters to root for. You get to care about a dozen kids, ages 9 to 12, who not only have the Orpheum rocking but they get the joint jumping.

Literally. Someone named JoAnn Hunter is credited with choreography, which consists delightfully of kids jumping while they sing and play instruments. Joan Squires, head of the sponsoring Omaha Performing Arts, calls them quadruple threats, and I’d only slightly revise her list of the four talents.

They not only sing, act and play drums, guitars and keyboard, but they don’t just dance, they jump at a rate that would exhaust most adults. And the audience joins them in spirit while clapping to their rocking rhythm.

While you’re rooting for the kids to survive their substitute teacher and win the battle of the bands, it’s OK to cheer for their teacher even when he’s behaving outrageously.  Dewey Finn (think Jack Black from the movie) is played by Merritt David Janes, who did a Broadway stint as the pudgy moocher who wangles his way into teaching at a fancy private school.

He’s lazy, gross and a bit delusional about becoming a rock sex god. But he strikes a chord with talented kids whose parents don’t listen to them and soon has them rocking angrily to “Stick It to the Man.”

I’ve not seen the film version, but I’ve seen Jack Black doing that character, and I looked forward to seeing what Julian Fellowes (Downton Abbey creator) and Andrew Lloyd Webber, who added new music, did with the concept.

But I had no idea how much fun it would be to watch the kids at work. Let me count the ways seven of them do their thing:

** Lawrence (Julian Brescia), the chubby one with glasses and no friends, becomes a keyboard wizard.

** Tomika (Camille de la Cruz), the shy one who seems left out, turns out to be the lead singer when she wows them with “Amazing Grace.”

** Katie (Leanne Parks), who jumps with the best of them in her pleated plaid skirt, strums a throbbing bass beat.

** Freddie (Cameron Trueblood), joined in the cast by younger brother Dylan, is identified in credits as “a long-time drummer.”

** Billy (Sammy Dell), who challenges Dewey’s slovenly style, came up with an over-the-top costume for the band before settling for something simpler.

** Summer (Sami Bray) tries to correct her teacher’s errant ways, and he realizes she’s smarter than him so he makes her the band’s manager.

Put it this way: These students in the band are even more important to the success of School of Rock than the VonTrapp children in Sound of Music. That doesn’t mean Dewey doesn’t have appealing support from Lexie Dorsett Sharp as Rosalie, the principal of Horace Green Preparatory School.

She may start as a protagonist of sorts but evolves into a Stevie Nicks fan who sings a rousing “Where Did the Rock Go?” when imbibing with Dewey at a dive bar.

Principal Rosalie doesn’t quite buy it when she visits Dewey’s math class and hears music, especially not when he begins to sing a makeshift “Math Is a Wonderful Thing.”  But, like the parents much later, she finally catches on that he’s inspiring something worthy in the young students.

School of Rock runs through Sunday, April 28, at the Orpheum Theater in downtown Omaha, with performances at 7:30 p.m. through Friday, 2 and 7:30 p.m. Saturday, and 1 and 6:30 p.m. Sunday. Tickets start at $32 and are available at ticket.com and the Holland Center. 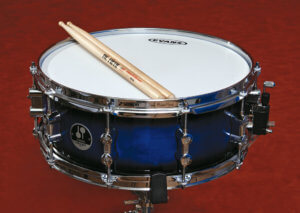