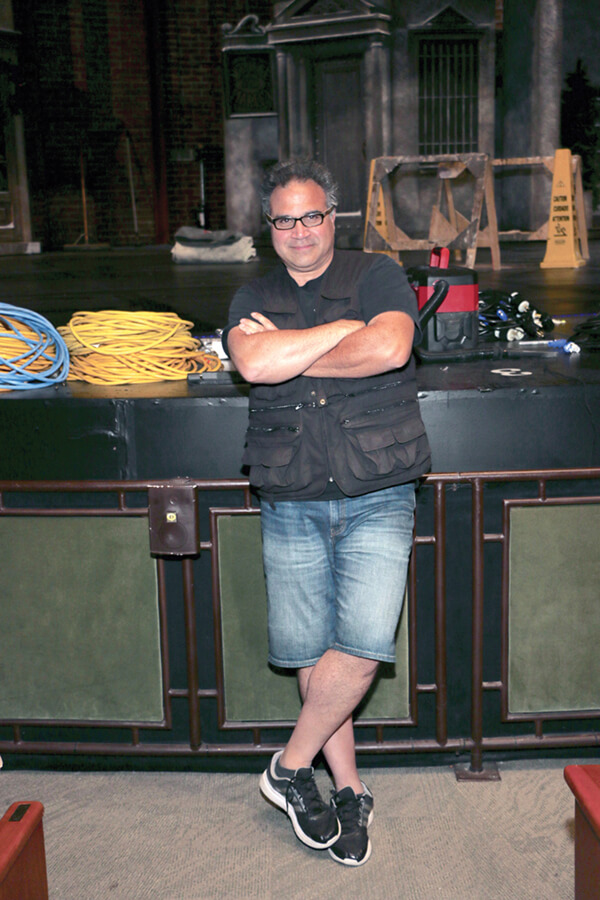 The staccato chirping of crickets ranks right up there with that of a needle being ripped across an LP when it comes to clichéd sound effects used to denote an emphatic FAIL. But to John Gibilisco, a cacophony of crickets is never a cliché … it’s an art form.

“When Ablan [Roblin] directed To Kill a Mockingbird earlier this year,” the Omaha Community Playhouse sound designer said, he had a specific soundscape in mind. We went with a symphony of sounds in all of the outdoor scenes — crickets, swamp frogs, tree frogs, cicadas.

“I wanted the audience to be right there in the action,” Gibilisco added, “so we installed tiny speakers under every fourth seat — we’d never done that before — so you got everything that you would hear if you were right there on the porch with Atticus and Scout. But I didn’t want the audience to be overtly aware of sound. I didn’t want them to be consciously thinking, ‘Wow, those crickets are awesome.’ I only succeeded in distracting you if that would have happened. I failed if you left here thinking about crickets.”

And Gibilisco, who knew that Roblin had once lived in Louisiana, wouldn’t settle for generic effects, so he made sure to select those from data files that had been geotagged with such identifiers as ‘Recorded in July in Montgomery County Alabama.’

The sound artist whose full title is Master Electrician/Resident Sound Designer, stumbled into the Playhouse in 1977 as a 15-year-old hell-bent on landing a smallish role in a production of Cabaret.

“I wanted to be an actor, he said, “but I didn’t know what I was doing or even what an audition was. Couldn’t sing. Couldn’t dance. Didn’t bring my own music. So I was gently directed to the tech table” and instead started volunteering backstage in building sets.

Four decades later, audiences benefit from the fact that Gibilisco was unprepared for his big audition. Instead of being in the center-stage spotlight, he now creates backstage magic in a subtler but no less vital leading role at America’s largest community theatre.

After 10 years of volunteering in various capacities, Gibilisco took a fulltime lighting and sound job with the company.

“There were a lot of raised eyebrows in the family,” he said. “They didn’t quite understand that there were real jobs in the arts. They didn’t get it that you could make an actual living in theatre.”

His introduction to sound and the physical act of splicing reel-to-reel tapes came before the dawn of the digital age.

“If you wanted to do atmospheric sounds back then, the audience knew it was coming because of the technology. The tape hiss and background hum was so loud,” he said as he covered his mouth and made that “crackly microphone noise” you remember from the morning announcements over the loudspeaker in elementary school. “That background noise telegraphed to the audience, ‘Okay, here comes a sound effect.’”

Even though sound designers are now but a few clicks away from finding just about anything they could possibly need, Gibilisco, ever a stickler for detail, still records about half of his own sounds.

“I found a million chainsaw sounds, for example, to use in Evil Dead The Musical [2013],” he said, “but none were … none were quite right. I had a friend who had a chainsaw and we recorded our own sound for that one. Easy.”

A chainsaw is an in-your-face sound effect, but Gibilisco is also masterful when it comes to the suspension of disbelief in devising all manner of creative solutions in a demanding environment where the highest standards in production values rule.

And sounds can be deceiving.

The musket fire he planned for the battle scenes in Les Miserable (2013), Gibilisco explained, was downright underwhelming.

“All the musket effects I could find ended up sounding like pop guns on stage,” he said, “so what you actually heard was cannon fire, not muskets, in that production.”

Has the man whose career was launched because he once bombed an audition ever similarly bombed in his sound work on that same stage?

In the 2013 production of Ella, a scene called for Kathy Tyree (as Ella Fitzgerald) and the audience to hear a series of recorded, in-her-head voices, one after the other. Instead, a sequencing error led to them all erupting at once in a jumble of overlapping noise-noise-noise.

‘”Oh, all these voices in my head! I can’t take it anymore!’ Kathy ad-libbed without missing a beat,” Gibilisco recalled. “The way she played it was totally transparent. I don’t think many people in the audience knew I had goofed, but everybody backstage gasped. Kathy saved my butt that night.”

There’s an old adage in sports that umpires and referees are supposed to be invisible. The only time you really notice them, it is said, is in replay after replay following a blown call. Gibilisco nodded knowingly at the parallels to his own work.

“It’s easy to go overboard and make your sounds front and center in an audience experience,” said the man who is forever clad in a stuffed-to-the-gills, 18-pocket tactical vest, “but my job is to enhance a director’s vision. I want to be part of the storytelling like everyone else, but I must remain true to the conceptual framework of the director’s creative vision.”

Among Gibilisco’s greatest challenges, he said, was the fight scene in Deathtrap (2013).

“The scene started with an approaching storm churning in the distance and it grows as does the action on stage,” he explained. “The fight choreography was very complicated — more so than most — because I had to sync thunder, lightning and the actor’s jabs.” Just as in a badly dubbed Japanese B-movie, the scene could easily have turned comical if his timing had been off by even the tiniest margin.

And when it rained in the Howard Drew Theatre in Twelve Angry Men (2009), Gibilisco was not satisfied with the natural sound of the water dribbling down the windows of the jury’s deliberation room.

“It sounded like somebody was just splashing around in a sink,” the sound artist said, “so I mixed in a rain sound effect I recorded myself to get it just right. Half of what I do is to just get things to a certain point so that your brain can fill in the rest. I need you to stay in the show. I need to give you just enough to set the scene, but no more.”

While much of Gibilisco’s work dwells in that “just enough” realm of understated nuance — bucolic crickets, gentle rain — there are times when teeth-rattling bombast is in order. That’s when the topic of South Pacific (2008) arose in the interview.

“It’s funny that you should mention that,” Gibilisco said, “because whenever I meet somebody new and I tell them what I do, I can’t tell you how many times they’ve brought up those planes in South Pacific. It happens all the time, even now,” eight years later.

Those of you who saw the production need no reminder of the scene where belching smoke and blinding lights preceded the take-off (literally) of those U.S. Navy Vought F4U Corsair planes.

(Trivia Time … Yes, Gibilisco used actual stomach-rumbling, shake-you-to-the-core, crank-it-up-to-11 Corsair engine sounds because nothing else would do in a town that is home to StratCom and its many retired airmen who once flew the legendary fighters known as “Whistling Death.”)

“It’s the only sound I’ve ever done,” Gibilisco said, “that drew applause — applause for sound effects — every single night of the run.”