When applied to Omaha, the word refers to a neighborhood and a school where cross-cultural intersections happen every day. South is also the working title and setting of a new play by Los Angeles playwright Michael John Garces. His original work is having its world premiere at South High on Wednesday, May 31 at 7:30 p.m. as part of the May 27-June 3 Great Plains Theatre Conference (GPTC).

South Omaha’s a landing spot for migrants, immigrants and refugees. South High’s a microcosm of the area and its range of social-racial-ethnic diversity. Garces spent time in South O researching his play. He visited there in 2015 for a similar project. His new drama expresses fears, aspirations, issues and traditions of the two primary populations comprising the area today – Anglo-Americans and Mexican-Americans. Other ethnicities are represented in the piece as well. 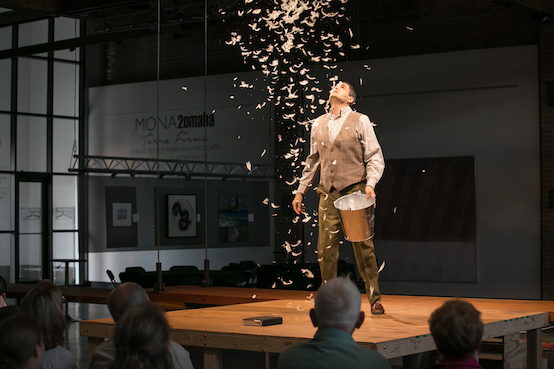 The GPTC production is part of the conference’s community-based PlayFest. The free show featuring South High students will be performed in the school auditorium. South High is at 4519 South 24th Street.

“Community-based work creates a story vibrantly alive in the truths of the specific community participating in it,” said GPTC artistic director Kevin Lawler. “It allows for the community to share stories directly, in-person, and with the depth theater provides. With the annual PlayFest Neighborhood Tapestries we are creating a living history of the local neighborhoods of Omaha that is unlike any other that exists for the city.”

Once Donald Trump got elected President, Garces returned for an extra story circle, this time with Deferred Action for Childhood Arrivals (DACA) recipients, who expressed concerns about anti-immigrant stands.

“It just changed what it meant to write a play at this moment,” Garces said. “I appreciated how my colleagues at the conference stepped up to that and had me come back out to have more conversations with people, which was really necessary.”

The threat of DACA’s repeal, wholesale deportations and a border wall were among the concerns shared.

“There was definitely some trepidation expressed to me about what certain changes would mean for South Omaha, particularly for young people.”

In the play Lina’s intensely curious about the legal status of friends Lupe and Diego, who avoid the subject until something brings it to light. The two girls wind up protesting on behalf of immigration reform. Garces said, “I talked to people with a very wide range of relationships to activism, so I wanted to represent young people who were activists like Lina and Lupe, and others, like Diego, who aren’t so much.”

By play’s end, Diego’s run afoul of the law and he and Lina have grown apart. Lina and Lupe ponder their respective futures. Lina’s free to go and return as she pleases. Lupe and Diego don’t have that luxury.

“Lina is frustrated with some things happening in her community and for her to leave is a different choice then for Lupe to leave because Lina knows she can come back,” said Garces, whose play intentionally explores who America is home to and isn’t today.

“I think this notion of home is challenging and contested right now. What does it mean to live in the United States since you were 2 and be told you have to go back ‘home’ to a place you don’t have any memory of and whose language you may not speak and leave the place where you do speak the language and where everyone you know lives. There’s a high degree of precariousness and uncertainty for people.”

Questions about identity and home resonate for Garces.

“There’s definitely personal connections in the play for me of families being put under stress by political concerns and as a young person having to make those decisions. Some of the interpersonal stuff that happens both within the family and with friends resonates, too.

“My father’s Cuban, my mother’s Anglo-American, and I grew up in South America, which has its own series of complexities. But at the end of the day I have friends who can’t make the same choices I can make. Regardless of how complex my life and how hard the choices may be, regardless of my convictions, there is always the simple fact I have an American passport, which unless I do something very specific cannot be taken away from me. And so I have the option of certain choices some of my friends don’t. Me choosing to leave the United States or stay is a vastly different choice than it is for someone who’s not a citizen.”

In terms of how South Omahans view themselves, Garces sees a dynamic, healthy tension between permanency and transition. It’s a working-class place with rich history and strong cultural ties, yet always reinventing itself. The one constant is aspiration.

“When I talk to people in the taqueria or the school or the Lithuanian Bakery or wherever I go, there’s always this sense of people looking forward to what’s going to be possible for the next generation and what is the neighborhood going to be. It’s been so many things but what it’s going to be is always in question.

“The sense of excitement and possibility around that is very real. The food, the murals, the sense when you’re on the street that lives are being made and that it’s a place of possibility – that’s what I’ve really taken away with me from South Omaha.”

He said even apart from questions about how federal policies, laws or executive orders might crack down on illegal immigrants, currents of change fill the air.

“I hear this from young people, old people, people from a wide range of backgrounds talking very consistently about how the neighborhood is perceived to be changing. People talk about what they think is positive about that change but also express concern.”

He said he finds people there take a “great deal of pride in their origins. whether Lithuania or Mexico or other places, whether they’re first, second or third generation.” He added, “They’re very proud, too. of being from South Omaha. At the same time they feel South Omaha is not highly regarded by people not of South Omaha.”

“He artfully distills dozens of stories and hundreds of images into these beautiful collections of relatable moments. His characters absolutely feel like you ran into them on South 24th Street. Some of our younger cast were a part of the South High discussion and recognize moments in the play that were in that conversation.”

Garces was still tweaking the ending in mid-April. Though he also directs and heads L.A.-based Cornerstone Theater Company, he’s put the production in the hands of Working, co-designers Bill Van Deest and Carol Wisner and costumer Lindsay Pape.

“As a writer I tend to try to create a framework that’s pretty open for the designer and the director to interpret that physical world. I talked to Scott about how from my writer’s perspective I think the play needs to flow and there needs to be rhythm but beyond that I’m trusting in them to capture something sort of essential about what it means to be in South Omaha. I’m actually excited to see what they come up with.”

Garces has enjoyed the experience of representing the former Magic City in a dramatic structure.

“It’s been a really good process. I’ve felt really supported by the conference. I don’t mean to sound all Hallmark about it but you occasionally have those artistic experiences that just feel good and this has been one of them. This has felt really right.”

He’s also come to feel a kinship for South O. Though he’s learned much over two years, he considers himself “more informed guest” than honorary South Omahan. 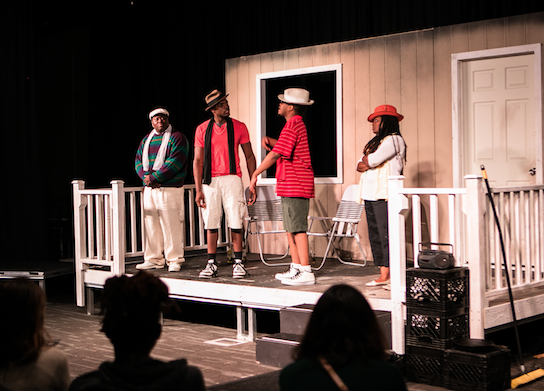 For the complete PlayFest schedule, visit