I’d love to have heard the exchanges between director Ablan Roblin and his two leading players, Josh Peyton and Tony Schik, as they rehearsed the Steinbeck classic Of Mice and Men at the Omaha Community Playhouse.

On preview night, the results of their collaboration first left me puzzled, then went a long way to winning me over in the second act. At the outset, Peyton’s low-key George came closer to my expectations from previous encounters with the migrant worker while Schik’s tittering and giggling Lenny seemed an over-the-top version of the lumbering innocent known by generations of theater-goers for pleading with George to “Tell me about the rabbits.”

But when it came down to the climactic fates of the two men, Schik’s Lenny made his downfall painfully believable while Peyton’s George was too taciturn for his grief to fully register. Schik’s early over-reactions tended to prompt inappropriate laughter from part of the audience, but Peyton’s later restraint posed no problems for appreciation of George’s plight.

In short, their performances for the most part were effective in unfolding a John Steinbeck masterpiece that was well worth revisiting. It helped considerably that Roblin mustered a strong supporting cast led by Dennis Collins as the aging Candy, a character near the end of a long run as a ranch hand, and Nick Zadina as the upright Slim.

One could quibble with two casting choices. It wasn’t the fault of taller Steve Catron that the script has a much shorter character referring to his villainous Curley as a short guy, but it was a bit distracting. And, for dog lovers in the audience, Anna as Candy’s old dog needed to look a lot more decrepit for us to believe it was time to take her out and dispose of her.

If by odd chance you’re not familiar with this oft-told story as novella, play and movie, it starts with George and Lennie arriving at a new job with ominous foreshadowing about “trouble” that caused them to flee the previous job. We see Lennie concealing something in his hand while rubbing it with his thumb.

George discovers it’s a dead mouse and forces Lennie to tearfully surrender it. The past trouble and Lennie’s obsession with stroking the soft fur of rabbits hints of troubles to come. The rabbits are his favorite detail in the story he repeatedly wants George to tell about the two of them settling down on a little farm.

Along comes Curley’s flirtatious wife and we fear that all of George’s warnings won’t keep Lenny from more trouble.

Mallory Vallier presents the wife as more an innocent than a vixen, more a victim of a nasty husband than a predatory tramp. So there’s less “she-had-it-coming” response than I’ve seen in some productions.

The cameo role that stands out in this show comes from Donte Plunkett as Crooks, a black man not allowed to sleep in the bunkhouse with white folks. His second-act scene with Lenny and Candy made an impact that I didn’t recall from earlier productions.

Roblin and perhaps fight director Kevin Barratt also deserve kudos for the handling of that climactic encounter between Lenny and Curley’s wife. And the music composed by Timothy Vallier merged effectively with the design. 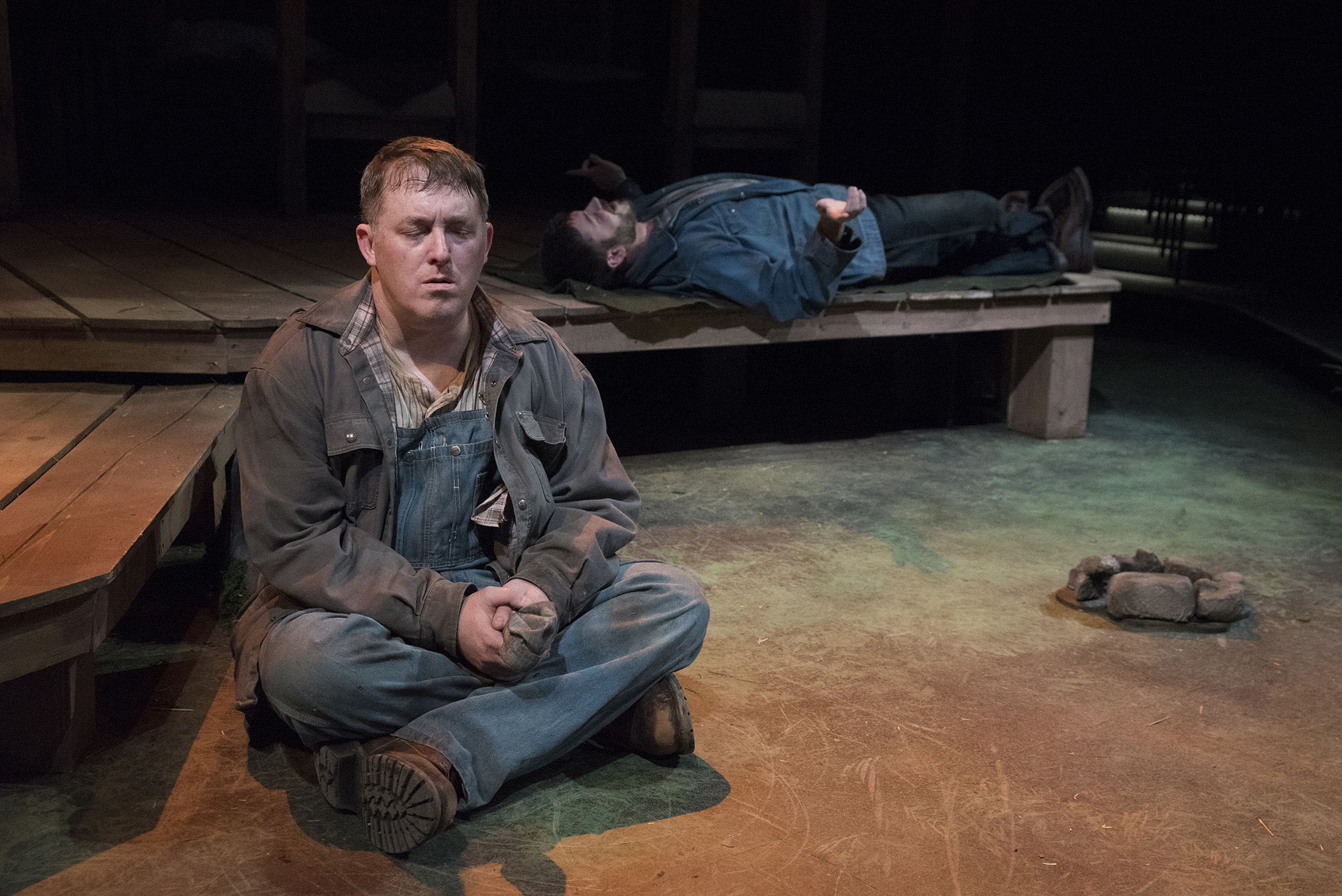