Home » Stage » Taking on Inclusion in the Arts

Why does casting people of color have to be political? Why are they relegated to roles defined by their ethnicity more than their talent? Despite countless contributions and years in theater, why are performers of color continually overlooked? Why is casting people of color over white actors considered, “non-traditional”, when they helped create the tradition of theater?

This highlights some of the dialogue brought forth in the first of hopefully many theater-centered panels held October 1st in the Union for Contemporary Art Performing Arts Collective space on 24th and Lake. The panel was hosted on behalf of several well-known theater cohorts; Echelle Childers, Denise Chapman (Union Performing Art Collective), Kathy Tyree (Kathy Tyree Productions), Wai Yim (Aetherplough) and Nik Whitcomb, all representing different theaters but primarily themselves. Sharing stories and experiences of their combined 50 + years in theater, and moderated by actor, Regina Palmer. The group opened up to a standing room only audience, after every seat and inch of empty floor was taken. The crowd spilled into the hallway, highlighting hopefully, the commitment of the community, as a whole, to do better. Some of the panel and allies in the audience wore “We Are Here” black t-shirts in white lettering, and added their own experiences in from the sidelines. All different, but universal. Exclusion is alive and well in our own community. Nik Whitcomb, is an Omaha-native who recently moved to a larger market for professional work. Minneapolis, Minnesota. He came back to participate in this discussion, out of love and loyalty to the city which gave him his first opportunities.

“This panel was about active listening. There is no affirmative action agenda. This is not a whine because we aren’t getting roles we want. This was a way to make the point that systemic racism is alive and the only way to combat it is the speak about it.” 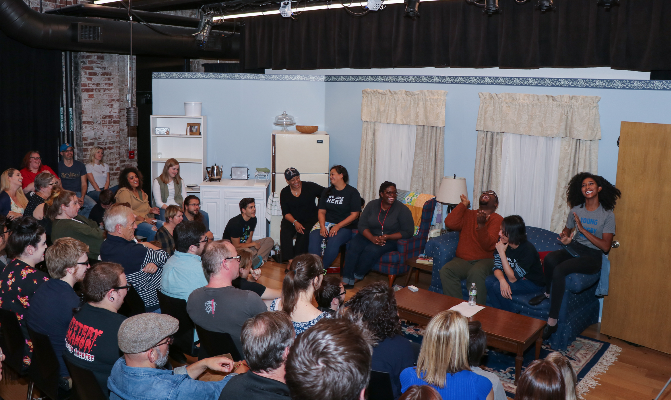 The event was in the early planning stages with Yim and Palmer at its helm, who saw a need in our city, like so many others. When this need was coupled with controversy, it solidified what they knew. It was the right time to headline this discussion. The controversy was the result of a long boiling pot of water, spilling over with an “oversight” by Omaha’s Theater Arts Guild earlier this year. The near complete exclusion of any performers of color, in their 50th anniversary awards show. It stung, but didn’t shock. It reopened old wounds and reignited the conversation of what it means to be non-white in the arts. This isn’t the first time Omaha has had this talk. Several years ago, actors and performers of color were outraged when the infamously inclusive musical RENT had relegated much of its multi-cultural cast to the background and filled the lead roles with popular white actors, of the time, despite a strong turn-out at their auditions. The show went on to wild success, despite the majority of the chorus dropping the show, again replaced with white performers. And it’s not an isolated incident. In 2011, New- York based Asian-American actor Pun Bandhu, with a company of fellow artists created the Asian American Performers Action Coalition (AAPAC) and began tracking the number of minority actors on Broadway. The numbers overwhelmingly favored white actors and performers. With white actors dominating at 84% of the roles in plays and 74% of the roles in musicals in the 2014-2015 season. These numbers stayed the same through last season, despite the popularity of the show, Hamilton, famously featuring a multi-cultural cast. It seems, Hamilton doesn’t make Broadway a wholly inclusive place any more than a Black president eliminated racism. The 2013-14 season was best for black performers, at 22% of the 600 actors on stage. Two African-American led shows helped that equation: After Midnight, with a 100% black cast, and A Raisin In The Sun, which had 15 black actors. Asian Americans trail well behind Black actors in numbers on stage (except in years that The King and I is performed.

Literally.) Followed by Hispanics and then the lovely, “Other” option—an abysmally low number of Native Americans, Middle Eastern and mixed-race actors, as well.

Hollywood has been fighting its own ideological battles in casting. Commonly referred to as “white-washing” –taking traditionally ethnic characters and replacing them with white actors. The most recent controversy surrounding this, Scarlett Johansson being cast as the Japanese character, Major Killian in the Ghost in the Shell. Hellboy actor Ed Skrein has also caused commotion turning down a role to make space for an Asian actor to fulfill it, as portrayed in original source material. And with less than 5% of roles being written specifically for ethnic characters, the actors could use it. Roles for non-white actors are not only scarce, they’re also too often one-dimensional, caricatures or tokenized versions led by racial stereotype, over…oh, I don’t know…plot, character development and nuance. Left to the whim of the playwright and the development of the season, actors of color are often sidelined until a “Black” play is added, or character needed.

This, of course, is the rule and there are exceptions. Many theaters have made equity amongst roles and plays in their season a part of their mission, across the country. Locally, the panel applauded what the Rose Theater does to be inclusive in their work. The wackadoo idea, of casting WHOMEVER is best for the role, regardless of race, sex, gender, and including actors with disabilities…which is a whole other conversation. In the space the panel was held, the Union for Contemporary Art Performing Arts Collective, Omaha-based, multi-faceted talent Denise Chapman has been building a theater primarily featuring Black actors and Black work, something she’s dedicated her extensive career to. Including, finding raw talent and shaping them for the stage. The idea that of course, a community theater, should look like the demographics of the community, it serves.

“This is hopefully the starting point for the larger conversation of representation in Omaha theater, which needs to be challenged.” 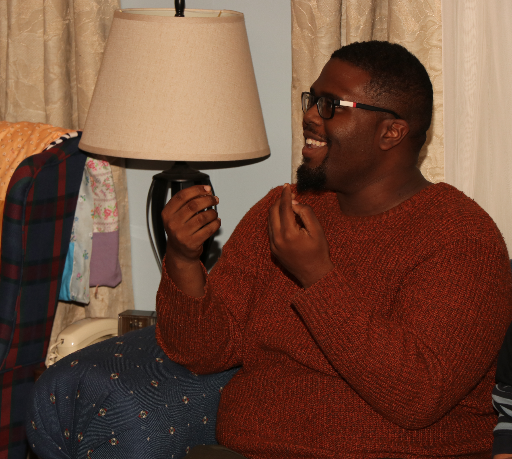 The panelists shared experiences both with reverence and a sense of humor. Just the idea that this discussion had to be had, again, could bring a smile and a shake of the head. What is missing in the culture of theater that makes exclusion so prominent? Isn’t theater a left-leaning bastion for all to feel welcome? That is both true and untrue. Theater is a place where anyone can do anything, but has also been dominated by white voices in the winner circles and upper echelons of the craft. With the exception of August Wilson, the majority of America’s “greatest playwrights”, are white men. And yes, they’ve created formative theatrical narrative–but the point is, there is more than one narrative. And when Edward Albee can posthumously kick a black guy out of a role, we need to talk about it.

Kathy Tyree, a thirty-year stage veteran and TAG award winner, recounted a time that she was snubbed for a lead role, despite outdoing her closest competition. The reason? It would not be “realistic” for her to be seen opposite a white man as a love interest. Several other actors silently acknowledged how they’ve experienced the same. Another topic was that of tokenizing Black and Asian actors, on which the panel was split. Everyone recalled a time they were called to fulfill a specifically ethnic role onstage, but it was only then that those calls come through.

This collective chorus of shared experience cannot be ignored and has led many of these performers to leave behind “traditional” theater and its auditions and politics, forging their own path and creating their own companies. Such is the history of many Black success stories. Without breaking down these barriers, people of color will never be “mainstream”. Even the act of casting a person of color in a traditionally white role is called “non-traditional” casting, with no regard to the tradition of Black and Asian actors in entertainment.

“We’ve been here entertaining folks, both as captive and free people. So, when you say “non-traditional” it’s frustrating,” Chapman says, undoubtedly exhausted. “It’s important to have spaces and platforms to explore diversity of culture, of racial experiences, especially now in the U.S. It’s not the time to slow down to make people comfortable. Part of growth is discomfort.” Regina Palmer, in an emotional wrap-up reminded the audience, many of whom were theater decision makers, that “inter-generational suffering is real” and when every part put forth showcasing a Black talent, drudges them back through the annals of slavery, Jim Crow, civil rights, etc.–the actors carry that with them deeper than just reciting lines. “We love doing those stories and paying homage to the past, but there are Black families and Black joy too. We come in just as many emotions as everybody else.”

Theater at its core is political, for so long an act of rebellion. Against societal norms, religion, oppressive ideologies, and corrupt politics. Theater has gotten people killed, jailed and exiled. People without a voice who made themselves a stage a harkened an audience to hear them and relate. A call to action. This evening was also theater in that sense. A call to hear the undiluted common experiences of theater makers and artists of color, and to move forward with that knowledge. Echelle Childers helped sum up what the panel hopes happens next.

“In the end, I just hope that some awareness was gained and that we can all be more respectful of each other and our differences. hope that a handful of people who were in the room gained a bit of perspective on the topic. I hope that at least one organization makes a positive change to be more representative of the community that they claim to serve. And I am hoping that the younger actors of color that are coming up now will know that they can speak up and that they do have a voice and they do matter.”