As with any musical modeled after an opera, there is epic romance and tragedy to be expected. Miss Saigon, post its 25-year anniversary revival run by Cameron Mackintosh, is an energetic two hour and 40-minute masterpiece, a classic saga cemented in the Broadway hall of fame that ran for over 4,000 performances and garnered 70 accolades. A rock opera in all its glory, Miss Saigon flourishes and revels in a romanticized account of historical drama, the fall of Saigon in South Vietnam in 1975.

Symbolism is often a hallmark defining rock operas and musicals and while there is that distinction, there is also a crossover aesthetic to acknowledge. Likewise, with opera, or rock operas in this case, you must look beneath the subtext of the piece as there are no breaks of dialogue, but a show that is entirely sung through. One might think that would surely be exhausting, but the dynamic cast burgeons with a momentous surge of stamina and vivacity, propelling the story forward and keeping the plot moving. This style hearkens back to familiar musical works such as Les Misérables, Jesus Christ Superstar, Rent or Evita. Given the direction it has gone it, it makes sense, with Claude-Michel Schoenberg and Alain Boublil (Les Misérables) penning the grittily-laced libretto. Miss Saigon is loosely based upon Puccini’s Madame Butterfly, a tragic opera about a Japanese geisha and her American naval officer. Many parallels can be drawn from the opera from the lyrics, for example (“The Sun and Moon,”) and also the progression of character development. There are many similarities you’ll catch if you are a Madame Butterfly aficionado.

The score of Miss Saigon is a gorgeous composition of dissonant, oriental melodies and flute tones, which accent the juxtaposition of Kim’s love for Chris and his stark abandonment. Nearly every song is memorable on its own, its intensity profoundly felt. “Movie In My Mind,” and “I Still Believe,” are hauntingly beautiful, and even “The Heat Is On In Saigon,” and rousing “American Dream,” token showgirl number, are lavishly gaudy complete with glitz and greed. 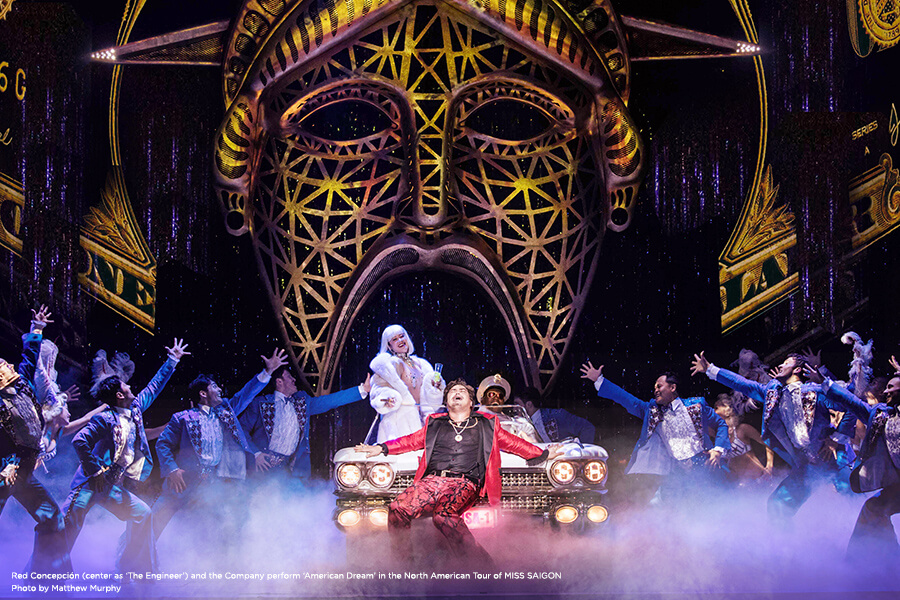 Energy abounds, from the red-light district of a Vietnamese brothel (“Dreamland”) to the fall of Saigon as the American G.I.’s plot their escape from the Embassy from an overhanging helicopter. This show will surely draw you in with all its emotional intensity and dramatic storyline. It really is a feast for the eyes, with its imagery, larger than life personas and action, and authentically cultural references done right (mostly sans stereotypes). Respectfully it does not sugarcoat the harrowing experience of Saigon, its people, and the rise of its inevitable Communist regime. Showgirls also abound, scantily clad and provocative as they vie for the title of “Miss Saigon,” (winner goes home with a G.I.) Despite the insinuation of the perverse or profane, Miss Saigon poignantly depicts the life of an orphaned woman in war torn Vietnam and her plight to save her son. The plot centers around the virginal and timid ingenue Kim, (Emily Bautista). French-Vietnamese souteneur The Engineer, played by Red Concepcion, is as sordid as ever, managing to beguile everyone in his path and exploit the women he panders off to American soldiers.

The Engineer refers to Kim as “Princess,” a moniker alluding to her innocence and more subtlety, her victimhood. Emily Bautista does the role justice, with a pristine belt carrying ballads with such flawless tonality, delivering a deeply emotive performance. Vehement yet charismatic, Anthony Festa as American G.I. Chris intrigues as a soaringly beautiful tenor, nonchalantly fleshing out a generalized character that would otherwise be seen as unsympathetic in today’s society. Festa and Bautista’s impassioned duets are a thing of pure beauty, so romantically entwined, painting a picture of paradise. Jinwoo Jung as Thuy, a Communist Commissar, transports you to a classic age of operatic villainy, commanding the stage with a menacing presence and rich resonance. J. Daughtry graces the stage with impressive pipes that blow the audience away, leading in a harmonious anthem-like rendition of “Bui Doi.”

Some things really done well are the scene transitions of spinning gates and moving sets, along with of course the iconic 3-ton helicopter hovering mid-air. Hats off to an international cast that rounds out a majority of its 42 members being from 18 different countries, including the Philippines and Malaysia. With costume design by Andreane Neofitou, there are over 200 shoes in the production, straw hats hailing from Vietnam and Thailand, an impressive 16 female ensemble costume changes, and original G.I. attire that was worn in combat. Musical staging and choreography by Bob Avian, with additional choreography by Geoffrey Garratt. Bob Avian, also served as the shows original choreographer. The breathtaking set design by created by Totie Driver and Matt Kinley. The result is sensational craftsmanship and polished execution.

Miss Saigon journeys through the hearts and minds of its audience, and delivers an astounding revival experience, its relativism speaking volumes.