Home » Uncategorized » Annie Brings Promise of “Tomorrow,” Wrapped Up in A Perfect Piece of Family Theatre 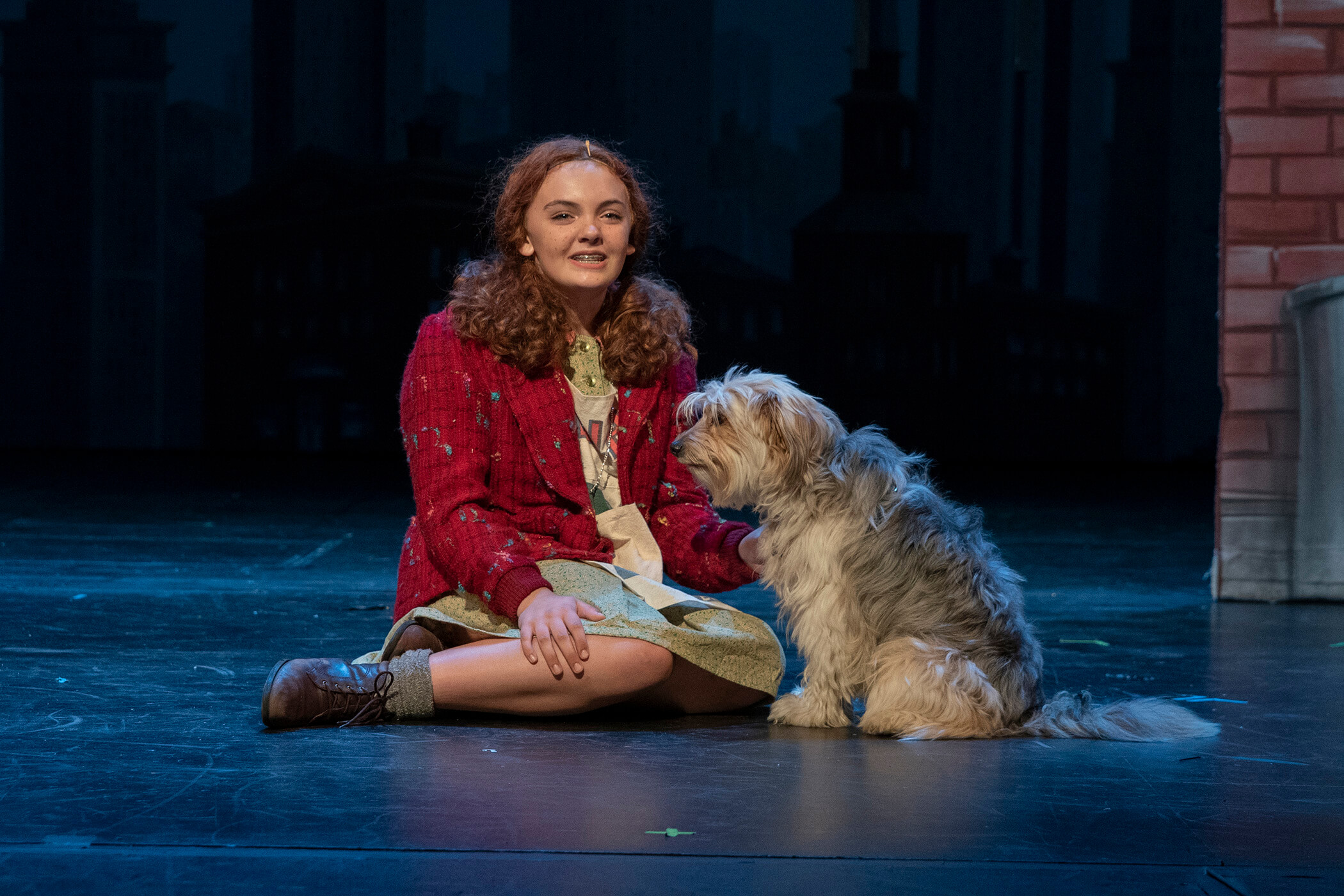 The first time I saw Annie was when I was a little girl, and I remember the magic and wonder of seeing children my age and younger performing on the stage of a national touring production. Eight years ago, I had the privilege of playing Lily St. Regis in a local Omaha community theatre production of Annie, and to date it is one of my most favorite roles I have performed. Seeing Annie performed at the Omaha Community Playhouse was a delight and a cherished walk down memory lane. Annie the Musical is chock-full of talented youth, comedic adults, (and dogs), and heart-warming ballads with a promise that tomorrow will always come, and that things will surely get better.

Annie has grown up in an orphanage all her life, waiting for her parents to come for her. She is under the care of the detestable Miss Hannigan, who would rather flirt with the launderer and brood by her radio with a flask of gin than watch the children. Annie is taken in with the compassion of secretary Grace Farrell, played by the graceful Angela Jensen Frey, to spend the Christmas holiday with billionaire Oliver Warbucks (Jay Srgley). The search is soon on for Annie to find her real parents. Allison Wissman plays a nonchalant and deliciously disillusioned Miss Hannigan, and her timing is impeccable, with every reaction and subtext she gives us. Her Lower East Side Manhattan accent is also spot on. Wissman is brash and loathsome of each little orphan girl she has to take care of and her contempt is perfectly expressed in, “Little Girls”. She is in one word, fabulous.

Many lucky girls all over the world have had the prestigious opportunity to play the iconic redhead belting out hits like “Maybe,” and “Tomorrow.” While the original Broadway performer Andrea McArdle might be the most famous of “Annies,” Omaha native Stella Clark-Kaczmarek in the principal role is a force to be reckoned with. Clark-Kaczmarek is stellar in her role as the beloved and iconic Annie, possessing a mature, clear belt. She portrays her so down to earth and you want to root for her from the start. But you also want to root for Hannigan as you start to see a softer side to her otherwise hard demeanor. Srygley captures the essence of Daddy Warbucks, and is no-nonsense and all business with a touch of heart. Srygley and Jensen Frey harmonize beautifully together in numbers like “I Don’t Need Anything But You,” and “A New Deal for Christmas.”

They say that in theatre some of the most challenging things to work with are dogs, and children.  Annie manages to do both effortlessly. The children in the show are a hoot, each character at the orphanage with her own distinct personality.  Brinlee Roeder may possibly be the most darling child to grace the stage in this production. She was a delight to watch as the pint-sized Molly, and certainly stole the show with her sassy on-stage antics and innocent charm. Can we just talk about the dog for a second? The lovable therapy canine Toby’s performance was perfect as Sandy as he came when called on command and kept reaching up to beg for treats. Okay, he was a little out of character but he would only break if he knew Clark-Kaczmarek had food. Adorable.

The ensemble also shines. Newcomer Sadie Langemo is one to watch as she is featured throughout, bringing a shanty town ensemble character to life with her animated persona and beautiful vocals (“Hooverville”). Your eyes go right to her 100-watt smile and perfectly polished dance moves in “I Think I am Going to Like It Here,” and as a soloist in the lively and captivating number, “NYC.”

Each scene paints a picture, from the bleak, industrial feel of the orphanage to the lavish design of Daddy Warbuck’s mansion. The sets fill up the entire space, making use of the stage in its capacity. Scenes flow into one another with flawless transitions. Even as one scene transforms from the extravagant formal living room of the estate to the bustling streets of New York on the Big White Way, it’s dazzling- from the lighting to the stylistic choreography. Rousing numbers such as “Easy Street,” and “Hard-knock Life” are entertaining and that energy is infectious. Cathy Hirsch as Lily St. Regis and Christopher Violette as Rooster make a ditzy and dynamic duo, playing off of each other’s comedic timing with aplomb.