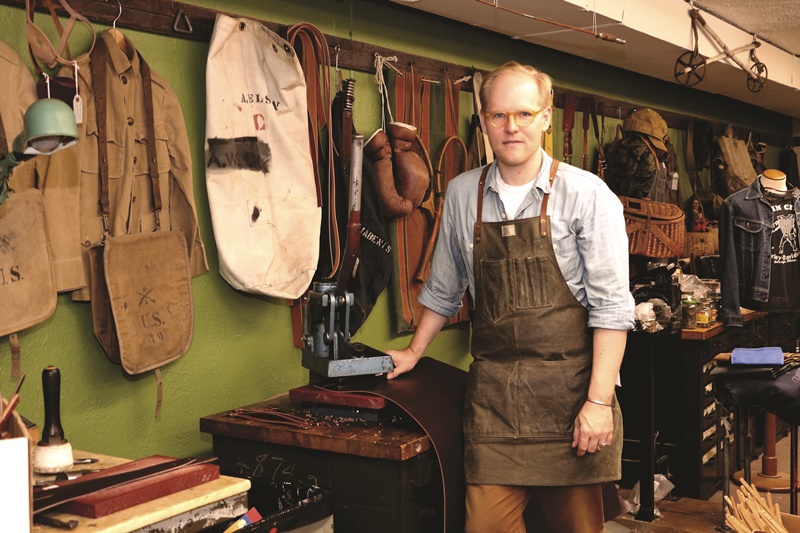 Chris Hughes had earned a bachelor’s degree in anthropology and sociology, had been a professional musician with Saddle Creek Records bands Beep Beep and Gabardine, and had meandered through various jobs post-college before eventually landing in the technology field.

“I spent a lot of years working mundane jobs,” Hughes said. “I’ve had a lot of weird jobs that were pretty ill-fitting.” A self-described jack-of-all-trades, he’s also been called “quirky,” “eccentric” and even “frenetic.”

“It’s interesting; in this world you do have the autonomy to choose your own life. Most people don’t think they do, but they do,” he said. “But making those decisions can be so difficult because most of us don’t know what we want to be when we grow up.”

The Recession of 2008 forced his hand. “I had been in tech and my job was eliminated,” he explained. The job loss created an opportunity to reflect on his experiences thus far and determine the future course of his career. As a married man with children, unemployment was not an option.

Hughes made lists of his interests, talents and viable career options, and came to a clear conclusion: “I wanted to run my own company and I wanted to make a physical product.”

In early 2010, Hughes launched Artifact Bag Co., building the business nights and weekends while working a “placeholder” job during the day. By the end of the year, Artifact was a full-time endeavor.

“I’m good at a lot of different things that are seemingly unrelated but the real thing was taking one singular focus and not deviating, and doing that one thing the best I can,” Hughes said. “That has been the biggest challenge so far in my life and the one thing I’m most proud of.”

Artifact features handmade bags, totes and rucksacks; heavy-duty aprons; and pouches and wallets in a variety of materials including leather, canvas, twill, denim and awning cloth. Hughes uses domestically sourced materials whenever possible and incorporates vintage hardware and new old stock fabric into some of his products.

“I really like tote bags because they’re utilitarian, they’re one-size and they easily fit in a shipping box,” Hughes said. “I really love apparel and outerwear, but the complexities of grading patterns and trying to find that product market fit with something that was more fashion-based just seemed too daunting to me for my first thing to do.”

High merchandise quality has been paramount from day one, Hughes said.

“I don’t just willy-nilly sketch something and throw it out on the market in the afternoon. We make prototypes, we make samples, we field-test,” he said. “I’m very, very interested in the ergonomics of my products, to make sure they do exactly what they need to do. I want people to use the product and enjoy it for a long time.”

Artifact started as a one-man business as Hughes tracked down and taught himself how to use — and maintain and repair — industrial sewing equipment. His tech background also came in handy for setting up an e-commerce platform and in transforming design concepts into three-dimensional products.

“I really love to learn things, so jumping into that — it was a deeper pool than I realized, but it was okay,” he said. “I was able to tread water.”

“It’s just been a learning process of creating this hybrid of a business model that takes basically 18th- and 19th-century, small-batch production and then melds it with 21st-century technology,” he said. “I made the first bags. For the first year I was in the basement of my home cranking this stuff out. There was no choice. If Artifact was going to exist it would have to be done on my own sweat equity. I knew it had to be done incrementally and it had to be done with a real long-game approach.”

Six years into Artifact, Hughes employs six skilled workers in a shop near Midtown and emphasizes that he’s always looking for people with sewing experience. “It’s very much an apprentice model. Even if you’re a wicked seamstress you’re still going to have that little bit of acclimation to sewing on industrial equipment,” he says.

He still personally designs all Artifact products in timeless and military-inspired styles that reflect his long-held love for antiquing, estate sales and vintage wear.

“I try to design the products to be unisex. The new rucksack I just released, I feel it fits a male and female silhouette really well. My field bag — kind of like my scaled-down little messenger bag — when it’s hip-slung it looks good on both women and men,” he said. “Not every man’s going to carry some of my tote bags because they could look a little ‘pursey,’ but that just depends on the user.”

“I actually appeal to kind of a middle-aged demographic. Surprisingly, when I got back from my most recent trade show in New York, I got a lot of feedback from men saying they wanted me to make an all-leather satchel,” he said. “The size they described, it sounded like a purse to me. But these were sartorial men, so it wasn’t just somebody who’s off the grid and doesn’t realize what they want. So I will probably be reintroducing that. I made that product a couple of years and it sold predominantly to women, but I’m going to be revisiting that for 2017.” 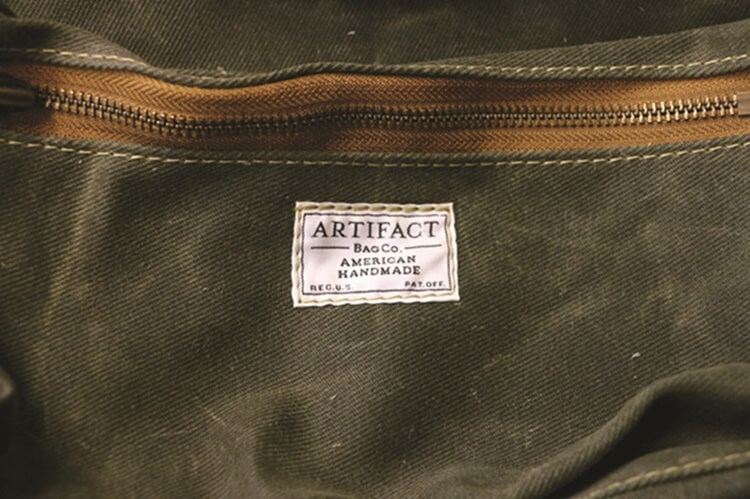 Through artifactbags.com, Hughes sells to buyers all over the country and his overseas business is increasing, particularly in Australia and Japan. Artifact products can be found through local retailers including Hutch in Midtown, Denim Saloon in Dundee, Lauritzen Gardens’ gift shop, the Durham Museum gift shop, and Mulhall’s. Yes, the nursery and landscaping business. “They’re doing kind of an artisanal thing,” Hughes explained.

He’s even found a unique market through Paper Kite in Countryside Village.

“My totes really work well for people who need a diaper bag but they don’t want it to look like a diaper bag,” he said. “I definitely scratch an itch in that category.”

Hughes is hoping to place his products with more retailers in the western environs of the city, and that’s just one of the options for the future growth of Artifact.

“I’ve still got a lot of bags to make; I’m not tired of doing that,” he said. “But there are other verticals I’m interested in and am trying to work on. They’re kind of hinged on delegation; I can’t do these other things in-house. My business plan is a little bit like three-dimensional chess.”

“I want to create a product offering that shows people what I as a designer am inspired by,” Hughes explained. “That’s something that runs concurrent not only through my design aesthetic, but just my ethos as an entrepreneur.”

Hughes admits that he’d probably “make a lot more money if I’d stayed in tech,” but he also admits that Artifact not only makes the most of his broad skill set, but also has an undeniable cool factor.

“I was a professional musician on Saddle Creek Records and toured all over the world. When you’re younger and you do that, and then that ship kind of sails, you have to be real and say, ‘Okay, what’s my next chapter?’ It’s kind of hard finding something to do that’s as cool as that,” he said. “But I think I found it now. I know I have. If someone asked me, ‘Chris, do you want to be in a touring rock band or do Artifact?’ I’d do Artifact any day of the week.”