A small space requires an artist to make decisions, particularly when that space is being shared with another artist. In From Here to There, the current show at Darger HQ, Nancy Friedemann-Sánchez and Leigh Tarentino have faced that challenge with works that, at first glance, seem to come from different visual universes.

From Here to There, which continues in the Vinton Street venue until Feb. 5, effectively lives up to its premise “to delineate the boundaries of the invented world and to examine ideas of cultural memory.”

The ambitious and evocative nature of Friedemann-Sánchez’s work is most apparent in her large-scale installations, such as “A Novel, Chapter I,” which juxtaposes simple sculptures of wood and stone with “papayas” composed of pearls that are illuminated by a light bulb reflected in a sheet of aluminum composite panel that hangs in the background.

In approaching the intimacy of Darger HQ, Friedemann-Sánchez has honed in on five examples of a shape that appears as just one component of these sprawling mixed-media installations.

Much-enlarged versions of chumbes, woven belts worn by an indigenous Andean tribe in Friedemann-Sánchez’s native Colombia, these pieces are acrylic on canvas that has been stretched over a wood frame eighty-five inches tall and five inches wide.

Friedemann-Sánchez has said that Minimalism has served her as “a dominant ideological umbrella,” and these imposing yet precarious shapes do recall Minimalism in their reliance on simple but dramatic shapes, the effect of which is partially determined by their relationship to the wall that supports them.

But whereas the Minimalists favored single-colored works with finished or industrial surfaces, Friedemann-Sánchez’s tall, thin pieces feature intricate strips of color, iconographic representations of animals and people, as well as tiny hatchings invoking the texture of the woven objects that inspired these works.

By contrast, the four paintings that Providence, Rhode Island-based artist Leigh Tarentino has contributed to this show all depict cool and abstracted bits of nature and the built environment, reminiscent of David Hockney’s swimming pool paintings in their precision and hues.

In explaining her work, Tarentino points to an intriguing catalogue of influences ranging from a Renaissance geometry textbook to the works of early twentieth-century painters Paula Modersohn-Becker and Stuart Davis. 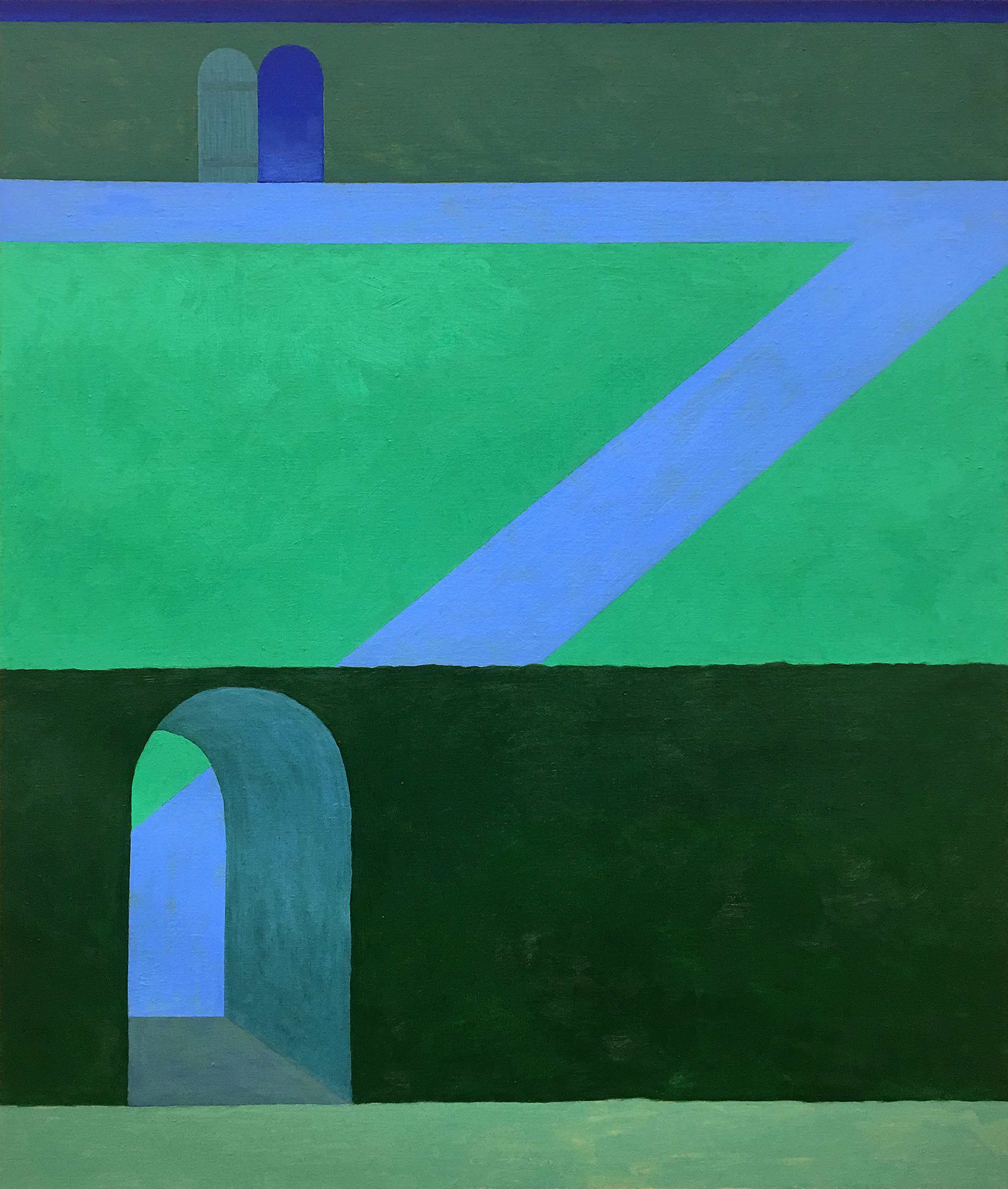 Tarentino is deeply engaged in how color, line, and brushstroke combine in different ways to give us access to “reality” through painting. She sometimes draws in pencil on the painted surface and uses a stencil to create the hard edges that contribute to the magical quality of her works.

Roughly the size of large windows (40” x 34”), these works provide us with a look into a world that is surreal in its stillness yet also strangely calming in the way the soft shades of green and blue depict a world that has been carefully designed but is missing the people who designed it.

Tarentino has said in conversation that the simplified nature of the images in these paintings is part of a recent shift in her work away from the narrowly representational (particularly as recorded by a camera) and toward a visual vocabulary that emerges from memory and imagination, including the encyclopedia of diverse images from across time (from here to there) that fill an artist’s mind when she approaches an empty canvas.

The longer one stands in Darger HQ’s narrow white space and feels how the works of these two artists resonate with each other, the more visual rhymes emerge. Tarentinos’s landscapes all feature literal pathways that make their way through the paintings at right angles to one another.

By leaning away from us, and yet speaking to one another and to us through color and pattern, these works pull us from here to there, in each case into a world quite different from our own.