Home » Uncategorized » But is It Food? 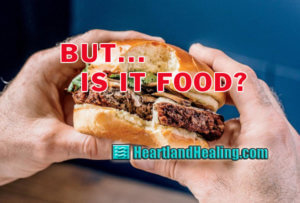 But is It Food?

Or the willing suspension of disbelief?

They’re all over the news and it’s far too early to tell if they’re here to stay or just a flash in the (frying) pan. They are those, hi-tech, not-meat, faux food meat substitutes gaining traction with a segment of the population that swoons over them. These new versions of the historic “veggie burger” are championed by fast food outlets. And remember my admonition: “fast food” is usually neither. The two most prominent players in the patty field are the Impossible Foods “Impossible Burger” and the Beyond Meat “Beyond Burger.”

Arguably the most prominent headline grabber is the Impossible Burger available at Burger King outlets so we’ll take a look at that and consider if it meets certain criteria that qualify it as food. You can decide for yourself.

Willing suspension of disbelief. I was pretty amazed to see two friends on social media going ga-ga over the Impossible Burger. These are two folks I consider intelligent and in fact, iconic in their fields. But in my opinion, their judgment must have been suspended.

Anyone who’s studied film — or literature of any sort, for that matter — is familiar with Samuel Taylor Coleridge and his description of the “willing suspension of disbelief.” Everyone takes advantage of it many times a day. It’s that mental gymnastic required to even watch a movie. To wit: Even though we know that the movie monster in the basement isn’t real, we suspend our disbelief and go with the deception in order to entertain ourselves. I suspect that is exactly what happens when otherwise intelligent people go to a fast food place to indulge in a techno-burger. We allow ourselves to be talked into believing that what we are eating is food.

“Raised” in Silicon Valley Though it’s Western in location and a “valley,” Silicon Valley isn’t known for herds of cattle, grazing land or ranches. No. It’s known for venture capitalists, techno startups and multibillionaires; science labs and human hubris of thinking we can do better than nature in areas we shouldn’t try. So one day in 2011, a techno Stanford guy started a company to make a meatless analog to meat. By 2016, after lots of lab work, genetically engineering fake blood and working out a deal with Burger King, the company launched lunch with the Impossible Burger.

“Ingredients? We don’t need no stinking ingredients!” I think I’ll just leave the argument to the reader by listing some ingredients of the Impossible Burger from the website. Read them slowly out loud so you get the complete impact of the compounds.

Compare that list to the ingredient in the hamburger from my grass farmer in Pawnee County, Nebraska: Beef.

So, here’s what I see in that first list: A bunch of things that do not really grow naturally in the world humans have adapted to. The Impossible Burger, to me, appears to be a concoction, not a food. One may argue that those chemicals exist in nature. But nature did not put them together into an Impossible Burger. With beef, nature played a role. I believe in living in harmony with nature, not in domination of it.

The argument for the impossible. The founder/inventor of the Impossible Burger claimed a desire to disrupt the beef industry. Well, in some ways I would log in as all for that. In my opinion, the industrial, confined animal feed operation-type industry should be disrupted. I wager it provides pretty dubious product and does so at tremendous cost to our health and the planet. But sustainably raised, grass fed beef, in my educated opinion, is far better than the analog that Impossible has come up with. However, if techno-meat can slowly wean us from CAFO meat, that’s a good thing. But the unintended consequences could be dire.

And the con. I’m not sure the human body knows how to metabolize all those things listed in the faux burger. Evolution gave us the time to figure out how to digest beef, green beans, artichokes, apples and the like. That’s food we learned biologically to live with over eons. Some of that stuff in the analog never existed in its form until the lab made it less than a decade ago. And some of it may not even be healthy. One main ingredient is soy.

Soy, the way Americans eat it, may be bad for us. Just google it. < is soy bad for you >  or https://www.westonaprice.org/?s=soy. Or, god forbid, use your own common sense: When was the last time you went to the store to pick up some yummy soy beans? Yeah, didn’t think so. The two main crops of the United States are corn and soybeans. Both industrial corn (99 percent of that grown) and soy are not so much foods but raw materials. Most the corn we grow is for ethanol and livestock feed. We can’t eat it until it is highly processed into junk food and corn syrup. Soy is basically the same. Asian cultures eat soy but it’s fermented soy like miso, tempeh, fermented bean curd. That alone is a big difference. Follow the link above. [Edited Note: 2019.10.02 – A previous iteration of this column identified tofu as a fermented version of soy. Most tofu is not fermented. This was pointed out by nutrition expert Dr. Jeffrey Meyers (www.ChiropracticOmaha.com) in an email to Heartland Healing and we thank him for the correction.]

After all this, are you ready to suspend your disbelief?

Heartland Healing is a metaphysically based polemic describing alternatives to conventional methods of healing the body, mind and planet. It is provided as information and entertainment, certainly not medical advice. Important to remember and pass on to others: for a weekly dose of Heartland Healing, visit HeartlandHealing.com.
2019.08.20