Home » Uncategorized » Depression: Why Not 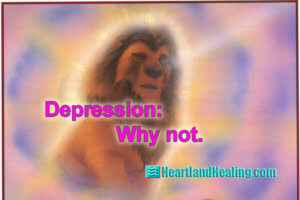 Do not be confused by the graphic. Do not mistake Mufasa from the “Lion King” fable as an icon of depression. But his image is there for a reason soon to become apparent. In the Disney movie, the departed Mufasa appears to his son, Simba, in a vision during Simba’s quest for identity. Mufasa gently chides Simba, saying words to the effect that “You have forgotten me. You have forgotten your Father. And you have forgotten who you are.” That’s why Mufasa’s image tops today’s Heartland Healing column. We all need that reminder from the Lion King.

Who are you? Ah, yes, the English rockers, The Who, asked that question decades ago. It’s a good question. Yet answers to that question are all around us. Our language even reflects it in the words and syntax we all use daily. Although our daily speech says it clearly, we consistently live in the belief that we are a body. We identify with the lump of inconsequential chemicals that walks around, talks to other inconsequential lumps of matter, values the shape and look of that lump, the associated lumps of other matter it accumulates and how that lump appears to relate to our lump. We call that lump a “body.” And we mistake ourselves as a body.

With our language we are the height of contradiction. Just think of how we speak of the body. To start with, look at your own comments. We convincingly speak as if the body is a possession. When a hot looking guy or woman comes to mind we don’t hesitate to use the possessive and say, “J. Lo has a great body.” Or, “Chris Hemsworth has a hot body.” It’s always the possessive. He or she has a great body or great abs. We don’t say, “J. Lo is a hot body.” We don’t say, “Chris Hemsworth is great abs.” No, somehow we recognize and realize that there is a someone, or a something that possesses those things. That someone or something is the real being that exists and it isn’t a body.

“The world is too much with us…” — Wordsworth That sonnet by the English poet is just one of the millions of cautions we give ourselves that we are obsessed with the physical emanation of our consciousness. Along with the obvious relegation of the body parts to mere possessions that is reflected in statements like, “My back is sore”, “My eyes are tired”, “My brain is foggy”, and the like, we have also saturated our art with such reminders. Yoda tells us we are “not this crude matter.” And metaphysical poets like William Blake remind us that “we are led to believe a lie” if we identify otherwise.

Our great (and perhaps only) mistake is believing that we are a body. And who would not be depressed if our total existence was based on the linchpin of that reality? How depressing would it be if our span of existence amounted to this tiny swatch of time that the body exists? I mean tiny! Our universe has been around for 14 billion years and we get 80? I mean, that’s worse than, “I fought in Viet Nam for three tours and all I got was this lousy t-shirt.”

Now stop for a minute. Remember what atoms are made of. (Hint: entirely energy.) And by the time you get to the correct answer for that question you will be admitting that the human body is made of nothing but energy. Repeat that. The human body — all things for that matter, (pun noted) — is made of nothing but energy. Maybe, just maybe, that energy has consciousness. Maybe that consciousness is you. Maybe that energy will persist (Law of Thermodynamics tells us it will) after we are done with the shape of the body. Maybe we are not a body. Maybe we are energy that has consciousness that will continue. That’s not depressing.

In view of all that we experience, all of the evidence and all that we know, it’s illogical to believe that we are a body. It is not as depressing as we make it.