Home » Uncategorized » “Eat Food. Not Too Much. Mostly Plants.” 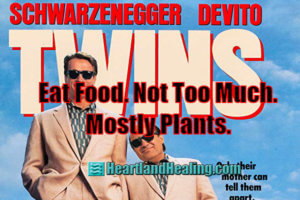 “Eat Food. Not Too Much. Mostly Plants.”

Legend has it that the movie “Twins” was pitched to producers by a summary written on the back of a business card: “Movie idea: Danny DeVito and Arnold Schwarzenegger are twins.” That was enough. In Hollywood it was a practice we perfected.

Since Hollywood is the land of dreams, everybody there has an idea for a TV show, a movie, a band, a book. But I always said that ideas are like pizzas thrown against the wall: some of them stick and some of them ingloriously smack the plaster and slide greasily to the floor, rarely picked up again. The town exists on a steady diet of ideas waiting to tumble into the ears of the Deal Makers, the Green Lighters, the Button Pushers. In Hollywood, access to those people is a prized commodity. Also in Hollywood, you’re more likely to meet a studio head who can make the deal when you jump an elevator at the “W” on Sunset Boulevard than you are by getting a meeting on the lot. So when you have that chance, you’d better have your “Elevator Pitch” ready. That’s the sales spiel you can deliver in the brief time it takes to get to the next floor. Make it short. Make it sweet. And make it sell.

If author Michael Pollan were asked for his idea of nutritional advice, it could be found in the elevator pitch serving as a tag line on his book In Defense of Food that serves as the title of this column. Succinct. To the point. Full. Let’s examine.

Eat Food. That simply means eat only that which is actually real food, not faux food. My rule of thumb starts with this: Unless it comes in its own skin, it’s not real food. If what you’re eating comes to you in cellophane, cardboard, metal or such, there’s a good chance it’s not real food but a composite of processed derivatives, flavorings, fillers, preservatives and who knows what else, including pesticide residues. Here are some examples. An avocado, a pineapple, a stalk of celery and a potato are all real food. A potato chip, can of cream of celery soup, store-bought guacamole and yes, even pineapple yogurt are going to have ingredients that are probably not real food. Even the best steak at the supermarket has a good chance of being packaged in carbon monoxide modified packaging in order to keep it looking fresh for days or weeks past its prime. It will take some self-educating to become discerning about real food versus faux food. Take heart. It’s worth it.

Not Too Much. Over 20 years ago I started a public access TV show about holistic approaches to health. One of my first guests was a local medical doctor specializing in what he called “anti-aging medicine.” I asked him bluntly what methodology had been shown to slow the aging process. He explained that in all of science, only one thing had been shown to slow aging and that was simply that the least amount of food a being eats, the less aging takes place. He described that aging’s most reliable indicator was the degradation of the telomeres at the poles of our chromosomes. Telomeres protect our chromosomes and keeps them from unraveling. As we age, the telomeres get beat up and raggedy. Metabolism plays a role in that. Digesting food is hard work. We should keep that work to a minimum. The key is to ingest the highest amount of useful nutrients in the lowest amount of food intake. I looked into what he told me and found a lot of research to back up the idea that eating less while maintaining optimal nutrition does have a positive effect. In the Standard American Diet (SAD) that contains so much processed food, we’re getting less nutrition and more food. Just look around at all the fat people. And don’t mistake skinny for being healthy, either. But do ask yourself this: How much actual nutrition is in that fast food burger, that soy protein shake or that vegetarian falafel?

Mostly Plants. Let me go off on my own little pet theories here, certainly based on some sort of knowledge and understanding of the facts. Over a couple million years, humans have evolved mostly from a hunter-gatherer model. Only a few millennia ago did we start with agriculture of grains and plants. And even as recently as a hundred years ago, meat was not a steady, daily part of our diet. Around the early part of the 20th century, Western culture developed a cheap (relatively), easy way to produce meat. It became known as the commercial meat industry. It’s messy from start to finish. It takes up a lot of natural and environmental resources and it makes it possible to blend the dregs and residual scraps from dead cows sourced from different countries, different states and different times in huge vats, processed into burger for your table and 99-cent specials at the drive-thru. Thinking it through, for over 99 percent of human existence, animal flesh was a rare meal, simply because it wasn’t easy to track down and kill a wild animal. It’s not that difficult now when the animals are confined by industrial practices. Put simply, our metabolism, our bodies, evolved to eat mostly plant nutrients. Only in the past 100 years or so have we overindulged in meat. Think that over. Michael Pollan did.