Home » Uncategorized » Empowering and Comical, Matilda The Musical Is A Big Hit at The Rose 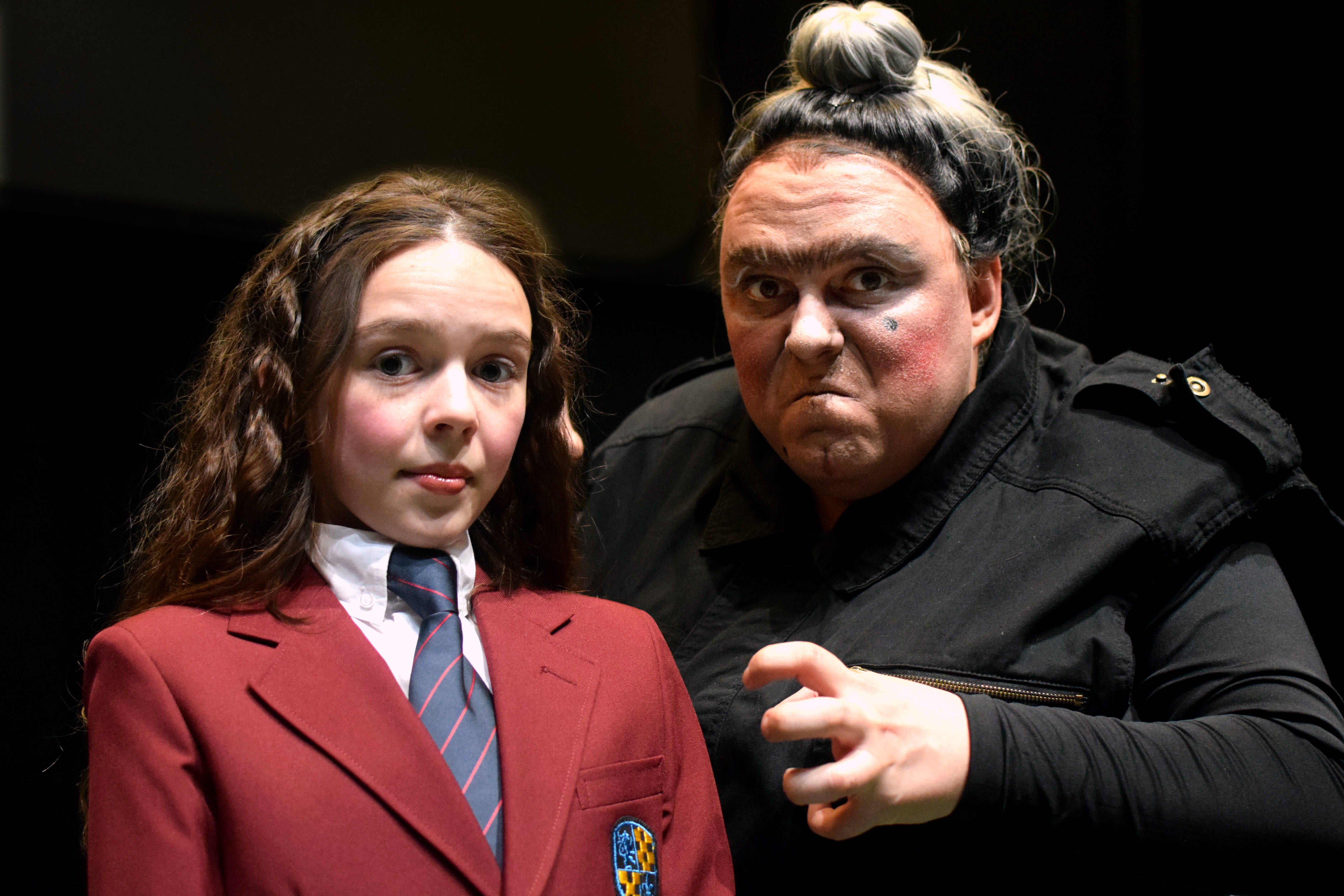 Watch any production at The Rose Theater and you know you are in for fun, whimsy, and a good theatre experience. Matilda the Musical, a musical adaptation of the children’s book by Roald Dahl is no exception. The story about a little girl with incredible abilities graced the stage Thursday, June 6th at a premiere night performance at The Rose. Dahl, known for his nonsensical made up words, notions, and whimsical storytelling, published the book Matilda in 1988. He is also the author of James and the Giant Peach, Charlie and the Chocolate Factory, and the B.F.G. Matilda the Musical, is brought to life on stage, inspired not only by literature but also a 1996 pop culture film that many will remember from their childhood. The musical debuted on the West End in 2011 with music and lyrics by Tim Minchin.

Matilda the Musical, directed by Matt Gutschick with music orchestrated by Jerry Brabec, is chock full of colorful caricatures and flamboyant personalities. Mischievous, gifted, and clever, Matilda (Maddie Smith), escapes to a literary world whenever she feels down and is verbally berated by her awful parents. She finds comfort in books and telling fanciful stories to the librarian, Mrs. Phelps (Brissa Lopez). Reading is considered appalling, especially to the gaudy and self-centered Mrs. Wormwood, (Sarah Gibson), who only cares about vanity and ballroom dancing competitions. Her father Mr. Wormwood, (Zach Kloppenborg), is a charlatan who is always looking to make a quick buck, even if it means getting tangled up with some unsavory characters.

In Matilda’s family, reading is abhorrent, so she is sent to the boarding school Crunchem Hall to be kept in line by Miss Trunchbull. A role traditionally played by a male actor, Joey Galda takes the cake, playing Agatha Trunchbull so naturally, emphasizing her power-hungry obsession for rules and running the school with an iron first. Terrifyingly fabulous, Galda embodies the wretched headmistress in all her tyranny and ribbon dancing antics. A former Olympic champion, the hammer-wielding Trunchbull with an aversion to pigtails and children, views the students as sniffling maggots and revolting, the bane of existence. She uses torture methods so outlandish like the “chokey” that the children don’t dare tell their parents about the mistreatment at school.

Matilda finds solace in her teacher, Miss Honey (Melissa King). Timorous yet kind and loving, Miss Honey advocates for Matilda, seeing her extraordinary potential, even as she has to face her own fears about Miss Trunchbull. King soars with a lovely soprano vibrato in “This Little Girl,” and “My House,” both touching songs that give insight into the mind of Miss Honey and her circumstances, which with the help of Matilda, eventually begin to improve.

Kloppenborg delights as the oily and amusing salesman who swindles his business clients incessantly (“I’m So Clever”). Maddie Smith as Matilda gives a spunky and strong performance as the quirky and occasionally naughty Matilda. “Quiet,” is a great moment in the show where she expresses her internal monologue, serving as a pivotal turning point for her to take control of her situation and determine its outcome.


A massive set designed by Tim McMath is comprised of more than 3,000 books atop shelves 30 feet tall. It is really quite an impressive, versatile structure. The projection design is superb and the music is a beautiful score of catchy, upbeat melodies and thoughtful ballads. The stage tricks involved are mind boggling and pulled off without a hitch. A giant cake disappears (“Bruce”), as if actually being eaten, and Matilda’s telekinetic abilities are showcased by projection designers Craig Moxon and Brittany Merenda. Costume Designer Sherri Geerdes doesn’t shy away from sequined, over the top costumes to add a little pizzazz to the vain Mrs. Wormwood, who boasts an ensemble of fun animal print and a glitzy dressing gown, or Mr. Wormwood’s loud and brightly checkered suit.

A high energy show, the cast, mostly children and teens, perform sharp, well executed, vigorous movements. There are great voices and personalities that shine. These kids are pros at what they do, and entertain in the anthemic rock-like number, “Revolting Children.” There is even some food for thought afterward. Matilda prompts a dialogue for families to discuss topics about bullying, injustice, and empowering others to use their voice for change. These children are “revolting,” and in the most empowered way, showing us what happens when the tables are turned and characters find the power to change their story.

Matilda runs June 7–30th at The Rose Theater with performances on Fridays at 7 pm, Saturdays at 2 pm, and Sundays at 2 pm. Contact The Rose Box Office for ticket information.