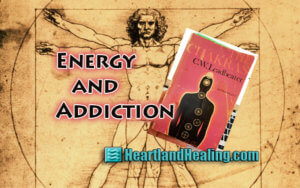 The Energy Nature of Addiction

Humans fall easily into the throes of addiction. One could almost say that it’s human nature to become addicted to something or even a lot of things. And, as the ego-mind is wont to do with anything that affects us, humans then look for outside causes to explain the addiction.

The other evening I engaged in a somewhat animated debate with a doctor, (surprise, right?), about the “cause” of alcoholism, an addiction that obviously afflicts millions. This MD stated that alcoholism is genetic. I acknowledge that it was an intriguing theory and he advanced, “No, it’s not a theory. It’s fact.”

Well, it isn’t fact. Every piece of peer-reviewed commentary on it describes the “research” with “suggests” or “appears”; never “proves” for one simple reason: it doesn’t prove. There are as many “causes” of alcoholism as there are research papers. None is settled. So here is a take on addiction that goes beyond the outside cause issue.

So looking at a gross level of energy, consider that we need food to live, right? Why? Because it provides us with energy in the form of calories as we break it down. That energy we “consume” makes its way through the body via a circulatory system. Now, anytime you cut off the flow of that blood and restrict the energy, you get what? Yes, disease or a physical problem. QED: blocking energy, even on the grossest of levels, is not a good idea.

Let’s take that down to the very metaphysical level, the energetic level. If we, our bodies, say, are part of that sea of energy that flows through the universe, it is best for us not to block that flow. Get it? This is all just simple physics, science. There is no debate required because all of this is not conjecture but fact.

Leadbeater and Chakras It is amazing that thousands of years ago the rishis (Sanskrit meaning “wise men”) of ancient India understood the nature of atomic physics. They just didn’t use the same words as we do and they didn’t have to measure it because they intuited the reality. They and their science, sometimes called “ayurveda”, with their advanced awareness, detected special areas of the human body that intersect with this universal energy field. They described these areas as chakras, another Sanskrit word translating to “wheels” because that’s how they appear to those able to see them. Chakras animate more like a camera lens or iris with the ability to open or close to restrict or facilitate the flow of energy in, out and through the body.

After years in India studying these energy portals known as chakras, C.W. Leadbeater, (1854-1934), author of 69 books, confirms that use of substances such as alcohol, opiates, nicotine and other activities compromise the chakras (The Chakras, [1927] pp 27, 90-92). The flow of energy is restricted as the chakras ossify. And as we have alluded, closing down the natural flow of energy is sickening. In the case of trying to stem the flow of the energy of the universe, it is futile.

The addiction connection. When surrounded by or immersed in a significantly intense energy field, humans basically have two reactions. We too often respond by closing down the chakras in an attempt to dampen the energy flow. We say, “Whoa! Hold off! Talk to the hand!” Alcohol, drugs, cigarettes and the like are examples of the methods we use as “stress relief” or even “lubrication” in social encounters. In truth, they are harmful because they are a futile attempt to block energy.

We have an alternative when facing an intense burst of surrounding energy. We can choose a response different from trying to close down the portals. We can instead learn to open them up, clear them, to allow the increased energy to flow through more efficiently without causing a blockage.

Many practices enable a human to open the chakras when encountering intense energy. Some include relaxation techniques, energy work, meditation, yoga, tai chi, prayer, mindfulness. The list of methods is extensive but does not include inebriates or drugs.

Given the two options, — one that blocks energy and leads to discomfort and disease or the other, that leads to the unrestricted flow of energy, — one is obviously better.

My story. For over 25 years, I worked in an industry that included massive amounts of energy flow. I mixed records in the studio for a number of elite artists. All of us involved felt the intense energy of the work. My response to that constant unfettered energy was similar to that of many (but not all) of my peers. I attempted to throttle the energy flow through my body with tobacco, alcohol or alkaloids with seeming success in the short term. At one point, looking back I recognized that I had to light a cigarette just before any particularly “stressful” action required in the studio. After reading Leadbeater’s treatise, I realized what I was doing. My chosen response to energy immersion was to try to close down. I changed my approach. I learned to open up the chakras. Smoking was no longer of use.

My experience of “stress” is no more stressful than anyone else’s. We all are subject to increased energy around us, whether it is in the workplace or during a crisis or just plain misthinking. How we choose to respond to that energy flow is the difference between addiction to a substance of futility or a pathway to improved health.

Heartland Healing is a metaphysically based polemic describing alternatives to conventional methods of healing the body, mind and planet. It is provided as information and entertainment, certainly not medical advice. Important to remember and pass on to others: for a weekly dose of Heartland Healing, visit HeartlandHealing.com.
2020.02.04