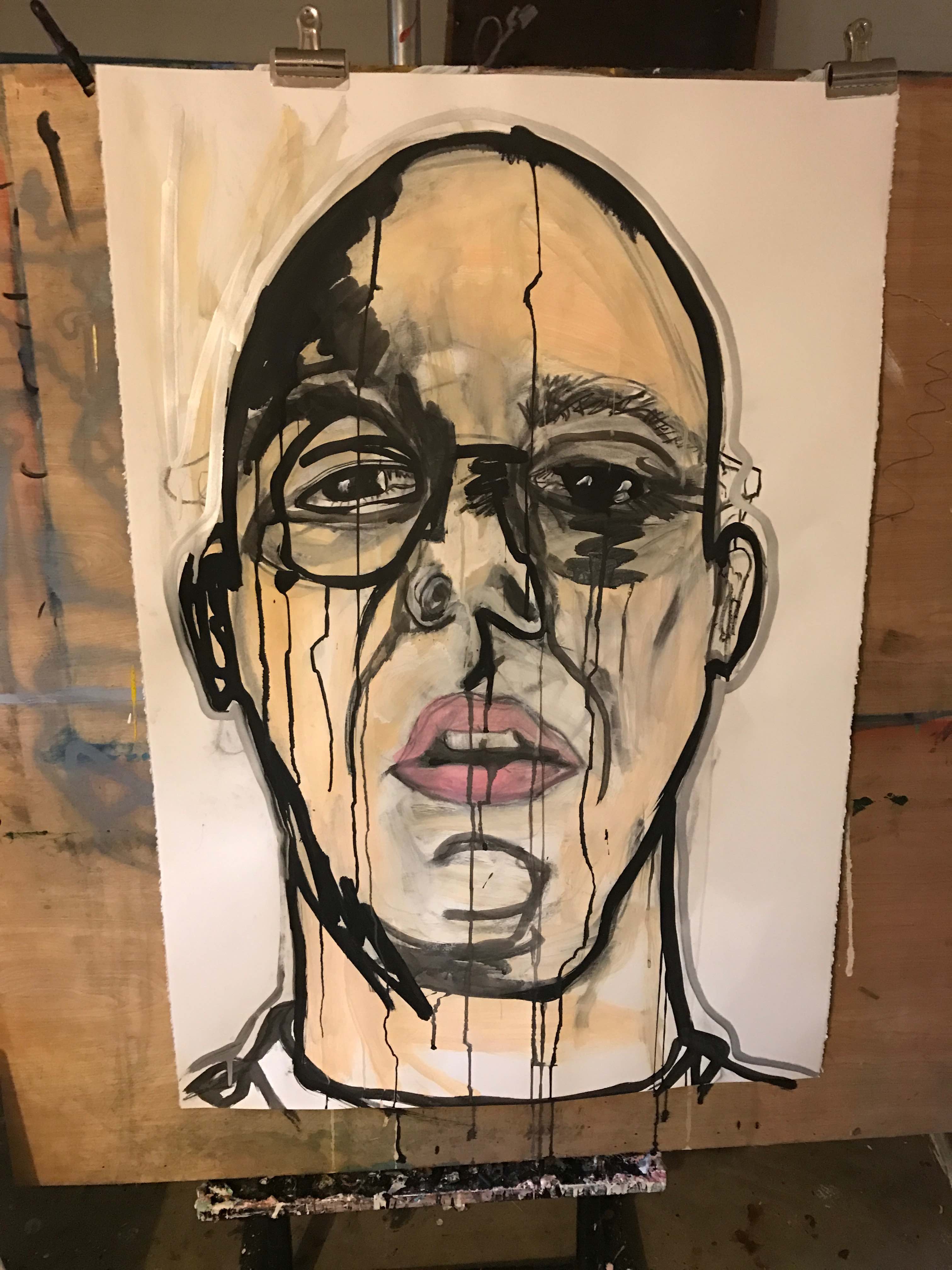 When Jeff King’s newest solo exhibition was announced at Petshop Gallery for June, its title hit me with some truth: You’re Beautiful, and Nobody Cares. It is clear that society insists I am a beautiful being while also deserting me when I need it most.

At the same time, it tells me that the individuality of people is important in theory but it doesn’t do the world any good. The former is an internal struggle, the latter a global crisis.

King’s doesn’t directly try to reflect a political message in this show, but nonetheless it was inspired by his feeling living in the world at this moment.

“I really feel like individuals are living lost from their individuality and simply lumped together as some kind of generational name as though that is all that matters as far as an argument or opinion is concerned,” he said. “It is difficult to cultivate a sense of self, a purpose when you can’t shake off assigned roles and attitudes.”

The result is a series of portraits that each have a distinctive personality. No two works seem like they represent the same type of person or personality but all feel like they are the product of a single driving force—King.

The story told through each of these works is a series of all the personality traits we select for ourselves, the feelings we share and the impact we have.

“Self Portrait” is the most realistic with a simple outline and careful shading. It is a traditional blueprint that adapts to personal, gestural qualities and runaway drips. An abstract expressionist take in another portrait, “Something Fearful,” adds texture to the edges of the eyes, brow, and lip where a nervous muscle tension may take hold.

Some works are more cartoonish, like “I’m Scared of Us,” which centers an every-politician character against a green background. The simple contours and shading remind us of our friendly neighborhood representative, but the bright red lips center on that trademark smile that’s always pasted on yet seems unsettlingly fake. It feels like a campaign poster for an unsavory campaign that has boldly had its dapper image smeared.

“Someone Told Me this is Important,” presents a clownish face with darkened eyes and Pinocchio nose. The words ‘FOR LUXURY’ scrawl along the bottom beneath a thick grey line and a leafy green background bring to mind the old ‘grass is always greener’ adage. The figure in this piece seems to be weighed down by his quest for financial happiness, the paint drips washing him away. 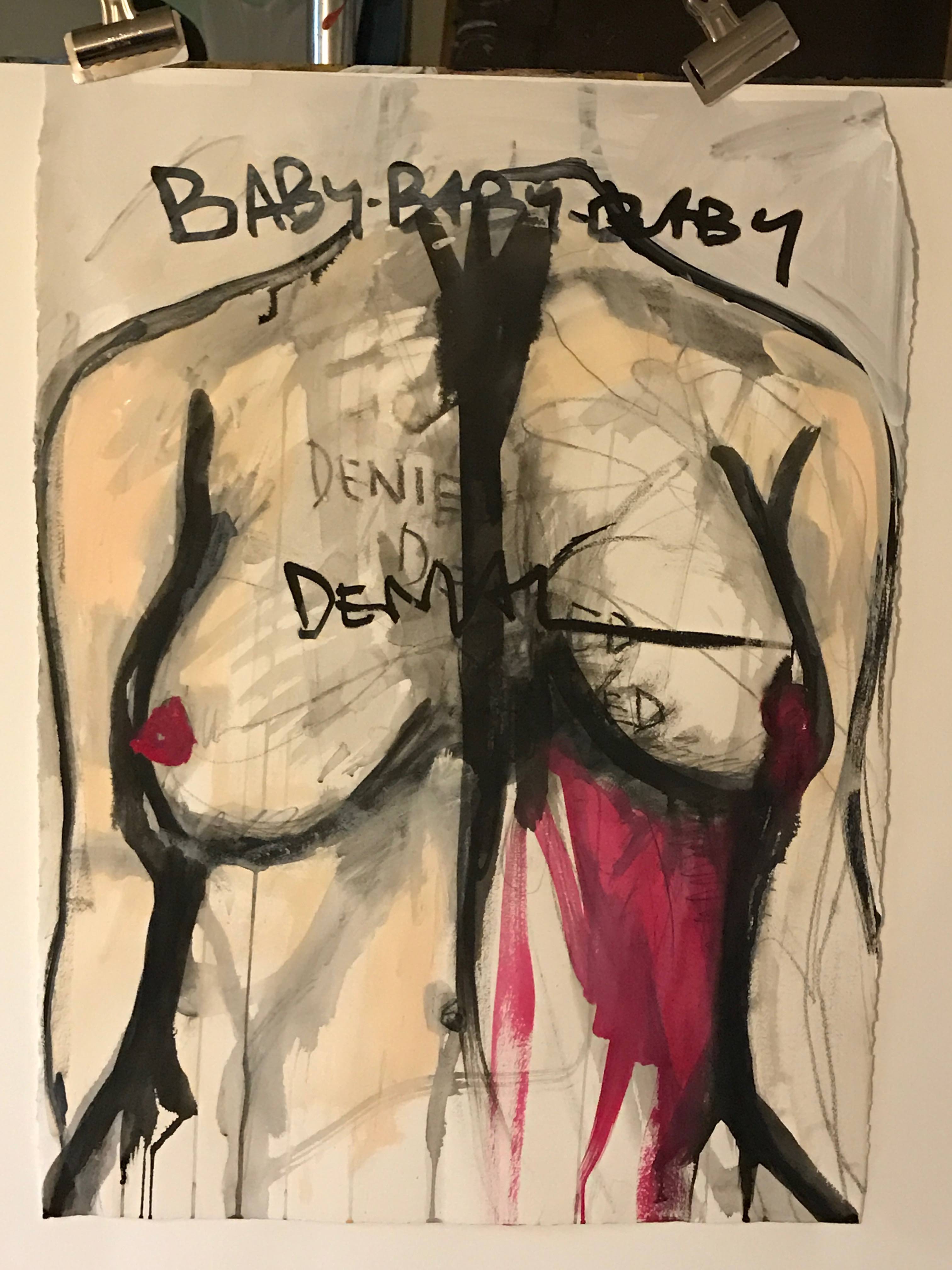 “It’s Too Bad We’re Not Equal” strays from the pattern in an interesting way. A woman’s torso is the subject without her head; the woman not fully realized as a person.

The title drives home the misguided sentiment—an apology for treating this subject unfairly yet the artist is wholly responsible for the representation. When viewed with In King’s show title piece featuring a woman, “You’re Beautiful and Nobody Cares,” we see that responses to women are layered with well-meaning but digging words and attempts to dissolve a woman’s power by removing her features or shrouding her.

The painting I keep coming back to, “Sitting in my Little Room” is not quite as overt as the others in its meaning but the words ‘BEING TIRED’ scrawled over somber black, grey, and gold touches on a feeling, attitude, and purpose that is common for so many of us and really hit at the heart of King’s message.

We are often too tired to motivate ourselves, to fight the system, to feel our emotions, to be unique. That global crisis is what King describes as “fucking lost.” 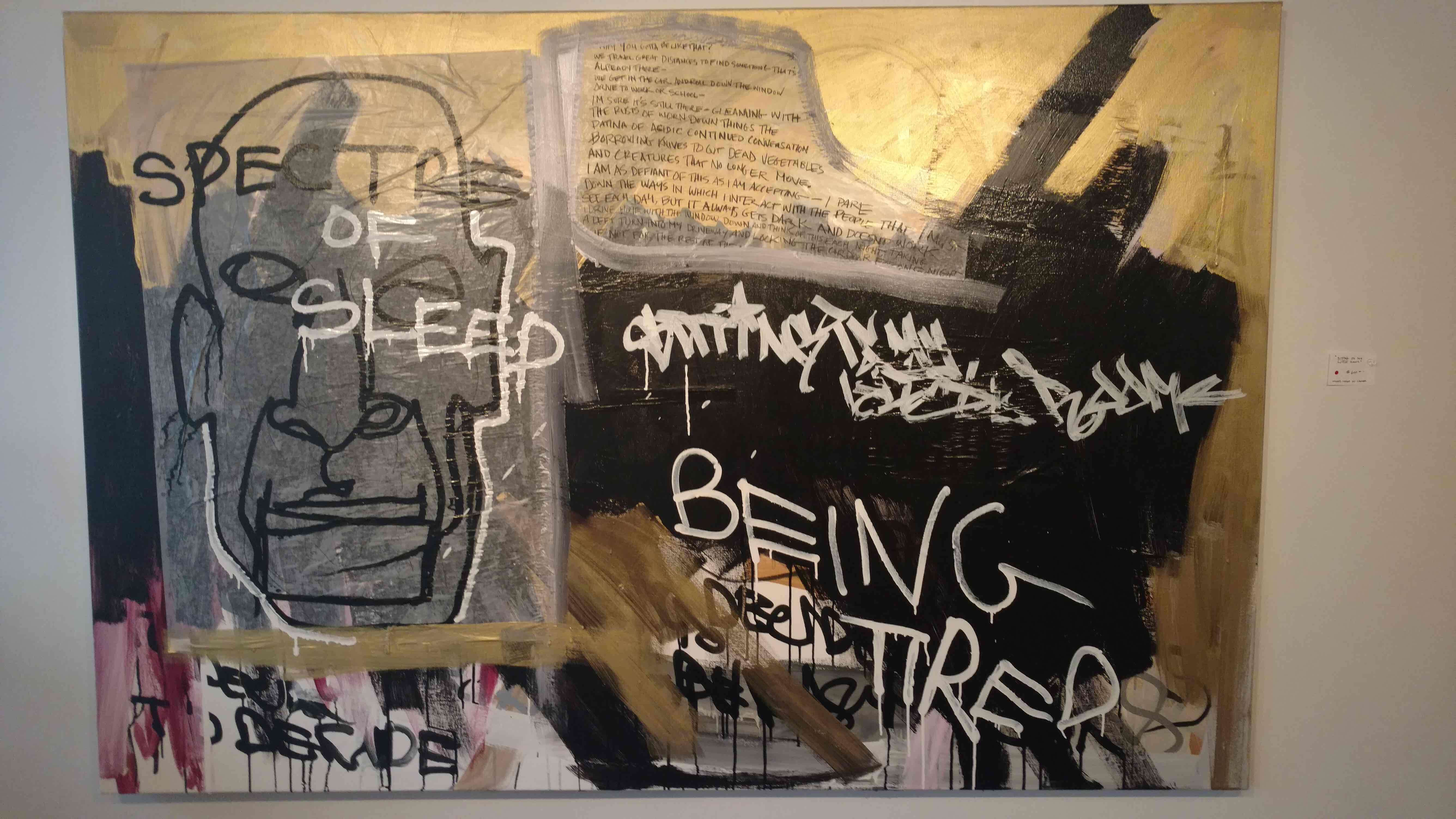 King’s latest exhibit offers a reflective and intriguing journey through the way we see ourselves amongst the perspectives of others. He emphasizes the ability of the mediums (watercolor, mixed media, oil) to convey intricate emotional concepts with their consistency, opacity and malleability.