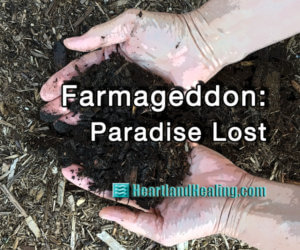 Go find a plot of earth that’s never been sprayed or fertilized. Preferably find one that appears verdant and rife with life. When you dig it, you should find earthworms, bugs, crawly creatures. And those are just the ones you can see with the naked eye. That’s not merely dirt. That’s soil. Soil is a living thing. It’s as alive as a bird or tree or body. And humans are killing it by the acre.

Healthy soil is filled with living creatures, all the way down to the very important bacteria and fungi that nurture it and create micronutrients that enter our food chain. That’s just like your own body. If you’ve been paying attention, you realize that 90 percent of the living cells in your body are not yours. Each human body is host to trillions of bacteria and fungi, parasites and crawly creatures that far outnumber our human cells of muscle, nerve, organ and bone — by almost 10 to 1. That’s fact, not theory. And the topsoil of our planet is as alive as a human body.

Most of the farmable land in the United States is turned over to corn and soybeans, neither of which humans can eat unless heavily processed. (And by the way, over 95 percent of those crops are genetically modified.) Most corn (about 80 percent) is fed to cows and ethanol plants. And since at least the 1970s, we’ve been growing those crops in a manner that turns topsoil into something closer to cardboard.

Farmageddon. What opened my eyes to our modern farming methods was learning about methyl bromide. Methyl bromide is a powerful poison gas that is used to kill things. Strawberry farmers in California, where most of our domestic crop is grown, know methyl bromide well. Here’s the short version: Strawberries are a fragile crop. Berries in general fall prey to any number of viruses, bacteria, fungi, bugs. So California’s strawberry farmers discovered a way to sterilize — that’s completely kill everything — the soil used for strawberry production. They cover the field with a tarp to contain the gas. Then they inject gas into the soil. It kills everything. Everything. They are left with a dead substrate that they leave covered, add the bare minimum of fertilizer (macronutrients) to keep the plants alive then harvest. What is left behind is basically lifeless dirt. Then they start the process all over again.

Nearly every non-organic crop in the United States is grown in a similar fashion: do whatever is necessary to kill things in the soil then add artificial stuff. An analog would be taking food away from a human and trying to get them to survive on only vitamins and supplements. They might live for awhile but wouldn’t be real healthy.

In summary, our industrial agriculture system is killing our topsoil, arguably the most vital natural resource on the planet.

Ear to the ground. “Mike, I’m getting really worried,” my friend Paul said when I settled into the passenger seat of his farm van for a chat last week. Paul farms and ranches in Pawnee County, the southernmost Nebraska county before the Kansas border. He’s been on his family farm for decades and is respected nationally as an expert on native prairie and grazing pasture. He grows no row crops.

“Mike, I just drove up from the farm and for an hour and a half, I didn’t see one patch of farmland that looked normal,” Paul said. “It’s near July and most the fields aren’t planted, many covered in mud or water. And that’s in the rolling hills of Otoe, Cass and the higher lands. And any corn I did see is only a foot or so tall. I think we’re in trouble.”

As everyone in the Midwest knows, the Ides of March were Farmageddon. Ice floes overflowed levees. Bridges and dams were breeched. Millions of acres of farmland all through the Heartland were covered. The water stayed…and stayed, increased and stayed some more. Fuel storage, chemical tanks across the land ruptured and floodwaters took on a reflective, glossy sheen, poisonous prisms of oil and toxins. When the waters finally withdrew (mostly) a few months later, farm fields are still covered with mud, muck and chemical waste. They lie unplanted or barely functioning. No one really knows how much is fallow at this point. But it’s a lot. Enough to make Paul really worried.

Gaia’s Ground Troops So the thought hit me. Industrial agriculture has long abandoned the sustainable practices of the past like crop rotation, organic animal fertilizer and multi-use farming. Humans have been mistreating this giant organ known as top soil for several decades. And this topsoil is nothing less than the “skin” of the organism Earth philosophers call Gaia.

What we saw in March and what we have witnessed this spring is massive. Earthly forces have been marshaled in redemption. Mother Earth is “mad as hell and not going to take it any more.”

Could it be that a twitch of the topsoil has occurred and Earth is reclaiming what is rightfully Hers? In human lifetime terms, this reclamation will take a long time. In Earth lifetime terms, it’s less than a blink of a cosmic eye. Let’s hope whoever’s got next will handle it better.

Heartland Healing is a metaphysically based polemic describing alternatives to conventional methods of healing the body, mind and planet. It is provided as information and entertainment, certainly not medical advice. Important to remember and pass on to others: for a weekly dose of Heartland Healing, visit HeartlandHealing.com.
2019.06.25