Home » Uncategorized » Food or Not Food 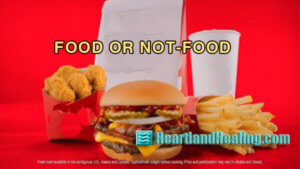 Food or Not Food

Okay, let’s keep this really simple. Humans need food to survive. We should all know that. But do we all know what “food” is? It appears not because we consume tons of material that is made to look like food, smell like food, even sometimes taste like food. But is it actually food?

Two recent developments inspired this particular Heartland Healing column. The first was continued coverage of that abomination known as artificial meat. It comes under a variety of names and even major fast food outlets are hyping the hell out of it. (Note: If a business with an overriding goal of a profitable bottom line is hyping something, you have to figure that product is hyped because it provides a better profit margin. C’mon. Get real.) Whatever you call this stuff, it’s a synthesized version of a food (meat) that humanoids have been eating for millions of years. Operative word here is “synthesized.”

The second news item was an announcement by the National Institutes of Health that research published in the scientific journal Cell Metabolism found conclusively that processed foods are bad for us, lead to illness. (Thank you, Captain Obvious!)

Meat? Hardly. On the first front, the topic of faux flesh — fake meat, — a cute little study compared what the media called “nutrition” in a fast food meat burger patty against “nutrition” found in a synthetic meat patty. The study listed only calories, fat, cholesterol, carbs, salt and protein. What a joke. That’s not nutrition. That’s components. At the most generous they could be called macronutrients.

Look, industrial meat is definitely not a good idea, in so many ways. I avoid it at all costs. But a construct of chemicals and extractions in no way fits my definition of “food.”  According to a widely used scientific definition, processed foods are industrial formulations made entirely or mostly from substances extracted from foods…, derived from food constituents… synthesized in laboratories… or other organic sources (flavor enhancers, colors, and several food additives used to make the product hyper-palatable).

So, to help out, let’s make it graphic.

In my humble opinion: