Home » Uncategorized » Grapetooth Are Just Happy to be Here 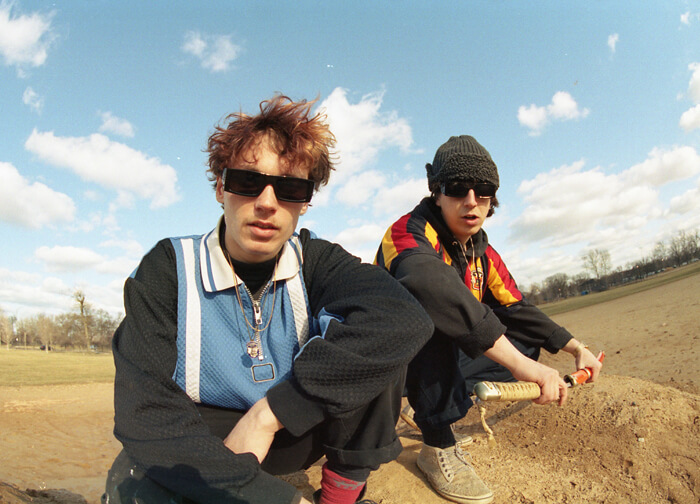 “I definitely am surprised that people are coming to shows,” says Chris Bailoni, one half of the Chicago synth-pop duo Grapetooth. The band is five dates into a 25-show cross-country tour and he seems like he is still trying to get acclimated to life on the road. “Don’t get me wrong, I’m really proud of the record we made, but having people turn up at all is awesome. I’m also just not used to this like Clay is.”

Bailoni is referring to Clay Frankel, Grapetooth’s other half and resident rock star. As a guitarist and singer in Twin Peaks, Frankel has been touring nationally since before he was old enough to drink. Just as we’re talking about him, Frankel yells “Oh yeah, good job Chris!” In a way that suggests he is both supportive of his bandmate’s handling of the interview while also subtly trolling him at the same time.

The pair met when they were both 18 when Bailoni started dating a good friend of Frankel’s. “We were kind of friends at the time but then Clay just randomly came over one day and we started making music.” The pair enjoyed the experience so much that they continued to hang even after the romantic relationship petered out, and, eventually, when they were both looking for roommates, they decided to move in together.

Over the span of three apartments, the pair continued to work on music when Frankel was not out on the road or recording with Twin Peaks. They released their first song, “Trouble,” under the Grapetooth moniker – which is a term the band jokingly use to describe heavy wine drinkers – back in 2017 and followed that up with “Violent” in 2018. Neither Frankel or Bailoni gave any serious consideration to performing or releasing a proper album until their friend and producer Knox Fortune asked them to open for him at a show in Chicago. “Before that, we had been getting a lot of support from our friends about the stuff we had been making but that just made us say “fuck it, let’s put out a record.'” A year later the band was signed to Polyvinyl and released their self-titled debut album.

The resulting record, Grapetooth, is an absolute hoot. The duo has noted New Order and Japanese electronic group Yellow Magic Orchestra as major influences on the record, but the music has a better sense of humor than both. You can find smile-inducing sounds throughout the album: the porn-tastic guitar on “Red Wine,” the wheezy synths on “Trouble,” and the opening notes of “Imagine On” that instantly remind you of “Keep It Comin’ Love” by KC and the Sunshine Band.

“We definitely have a good sense of humor about the whole thing cause it was just us deciding to go into my bedroom and record some music with no real pressure,” says Bailoni. “When we recorded the album, I wanted it to sound a little unpolished and relaxed because we wanted to replicate the feeling of how it was when we recorded it – and I think that carries over into our shows.”

The dance floor is where Bailoni says the band are looking at taking their sound next. “We’ve been listening to a lot of funk music and we’ve been thinking about doing stuff like that’s like six minutes long and super groove-based.”

For now, though, Bailoni says he is happy just enjoying life on the road. “With Clay’s schedule, the future is just unpredictable.” He talks about the possibility of producing more and working on his own material which he says is influenced heavily by the music he was surrounded by when he was growing up in London.

“Honestly though, I’m just trying to enjoy it,” Bailoni says. “I don’t want to say it’s a joke sort of thing, but everything is kind of light-hearted, and that’s the way I want to approach it.”