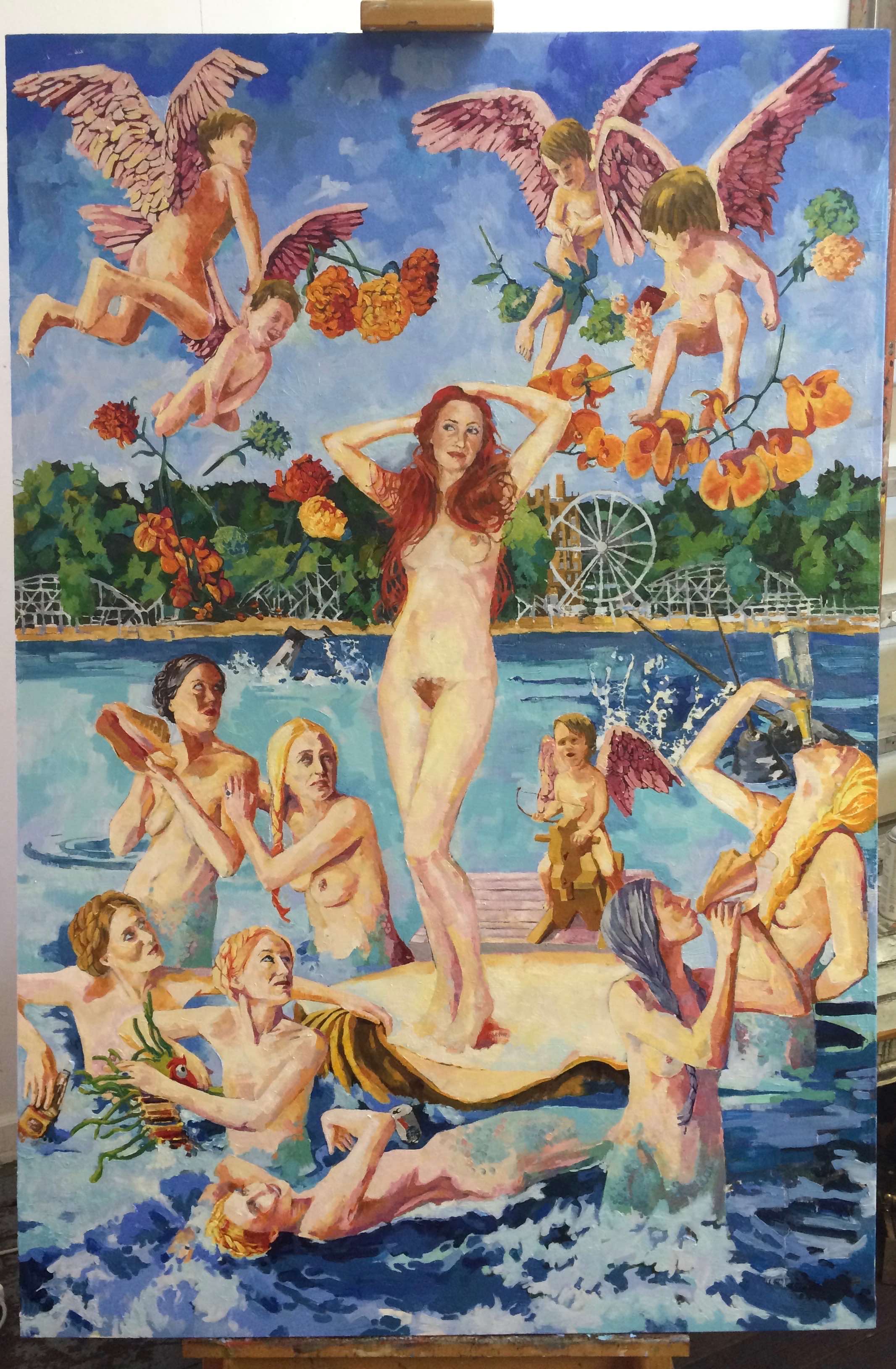 There’s something tantalizingly familiar in almost every work on view in Watie White’s current exhibition at the Garden of the Zodiac, which runs through March 19. Perhaps this is because the artist has one foot firmly rooted in an art historical past.

White’s clever and calculating imagery, presented in a contemporary context, runs variously between homage and pastiche. And it is this delightful ambiguity that leads the viewer through the surface of his narratives into scrutiny of their details.

A prolific artist, White is known as a painter, printmaker and muralist. His public works can be seen around town, including Benson, Midtown Crossing and the Park Avenue district. Most often, his public works are developed through a dialogue with current residents and by sifting through neighborhood histories, and thus look both forward and back.

In White’s personal studio work, a similar dialogue takes place. The artist is inspired by the urban landscape of his present-day ramblings, but the conversation is inflected by voices from the past: Hieronymus Bosch, Albrecht Dürer and Rembrandt van Rijn, to name but a few. Whether foregrounded in his images or discovered in their shadows, some inspiration from another era may almost always be found. 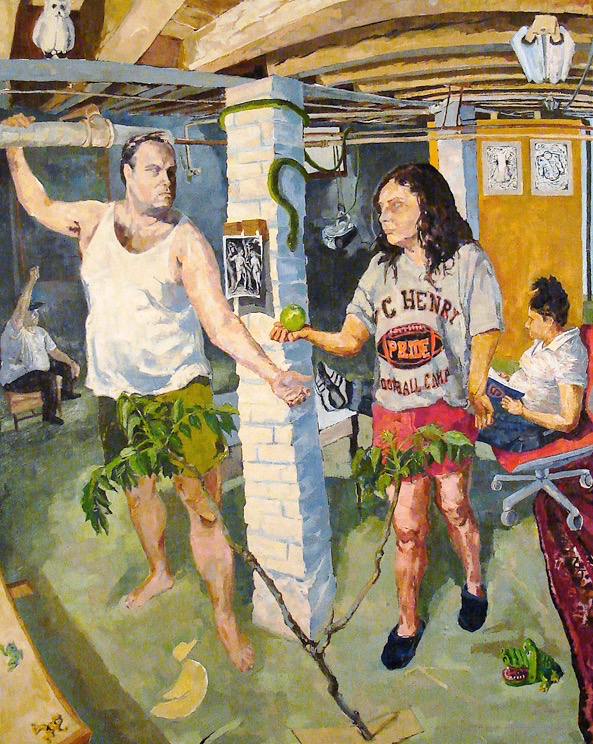 In fact, this exhibition opens with a group of colorful paintings from a series he entitles Stolen. They are the result of a collaboration between the artist and the people featured in them. Friends are asked to choose a favorite painting of theirs, and White proceeds to incorporate their visages into his own version of said masterwork.

This isn’t pure cosplay: Danny and Angela, a couple posing as Adam and Eve from Dürer’s famous rendition of the snake-in-the-garden story, are not nude, but are dressed casually as they might be found, one surmises, in the Eden of their home: he, in undershirt and boxers, she in t-shirt and shorts.

In the foreground, Angela offers a wary Danny an apple; a serpent curls around a pillar just behind them, to which is pinned a small version of the original Dürer artwork. In the background, a spare basement paradise reveals them at leisure, watching sports and reading books. Other clever adaptations and shifts in iconography await the viewer at every turn. 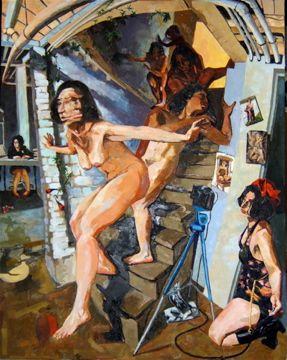 Similarly, “After Duchamp’s ‘Nude Descending a Staircase’” is a take on the famous modernist’s study of volumes in motion on the static surface of a canvas. The original, with its succession of abstracted superimposed images, has been the continued target of parody since its initial public viewing. What White finds in its proposition is the opportunity to take the concept into a more personal, specific place.

The protagonist, identified as Robin, is a real woman in the flesh, seen in various attitudes coming down a narrow flight of stairs. At the bottom, she appears again, now dressed as a photographer capturing this action in stop-motion stills, a reference to the sequential camera studies that inspired Duchamp’s own invention. In the background is a certainly more contemporary reference to the real-life Robin, seen sitting at a work desk on the computer.

White’s wide-ranging references to art history pair well with his broad style of painting, and his preference for a fish-eye view—a bowl-like optical distortion—adds to the smiling tone of his self-described “absurdist narrative portraits.” 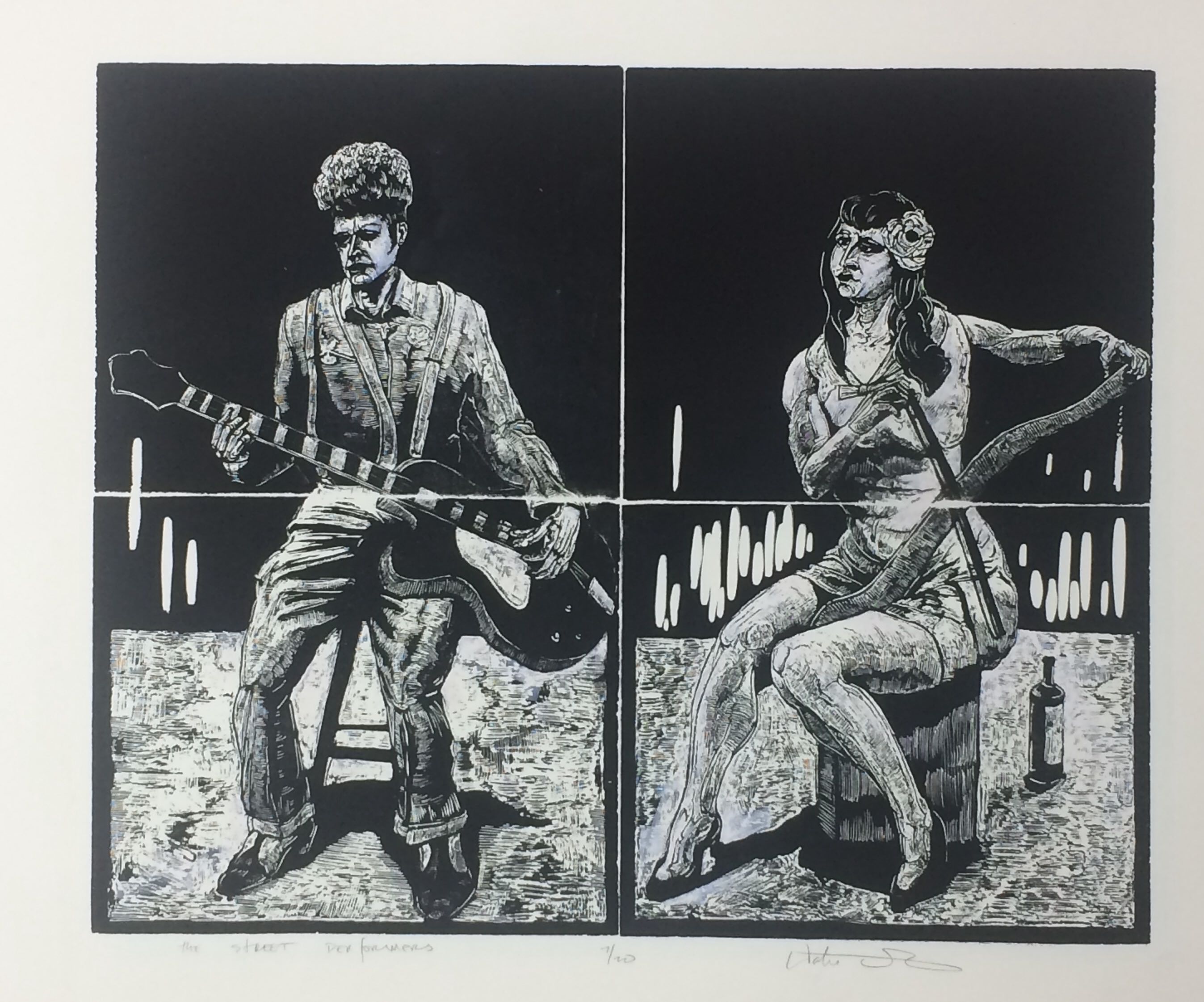 The rest of the main gallery is hung with small linocuts (prints made from carving into sheets of linoleum) resulting from a 2008 artist’s residency in Amsterdam. While using much of his time to study the work of past masters in the city’s amazing museums, White also sketched along his travels, later turning some compositions into artworks. Many views are iconic, including Café Dijk 120 in Amsterdam’s Red Light District, a pair of street musicians, and the grand interior of Prague’s main train station.

White’s style as a printmaker might be described as expressionistic, reflecting his approach to defining form through heavy line, bold form and somewhat distorted figures, exaggerated by his fish-eye POV. The overt physicality of the ink-filled cuts mix with his intentionally sketch-like approach to rendering figures to pleasing effect.

White applies this same stylistic approach to his Omval series of large scale woodcuts, which are epic in both size and scope. Here, the artist gets into the meat of his past/present fixation, creating suggested narratives fictions that range in tone from superficially idyllic to downright apocalyptic. In these, he indulges a taste for mixing the everyday and the extraordinary, the sacred and the profane, the mythological and the actual. 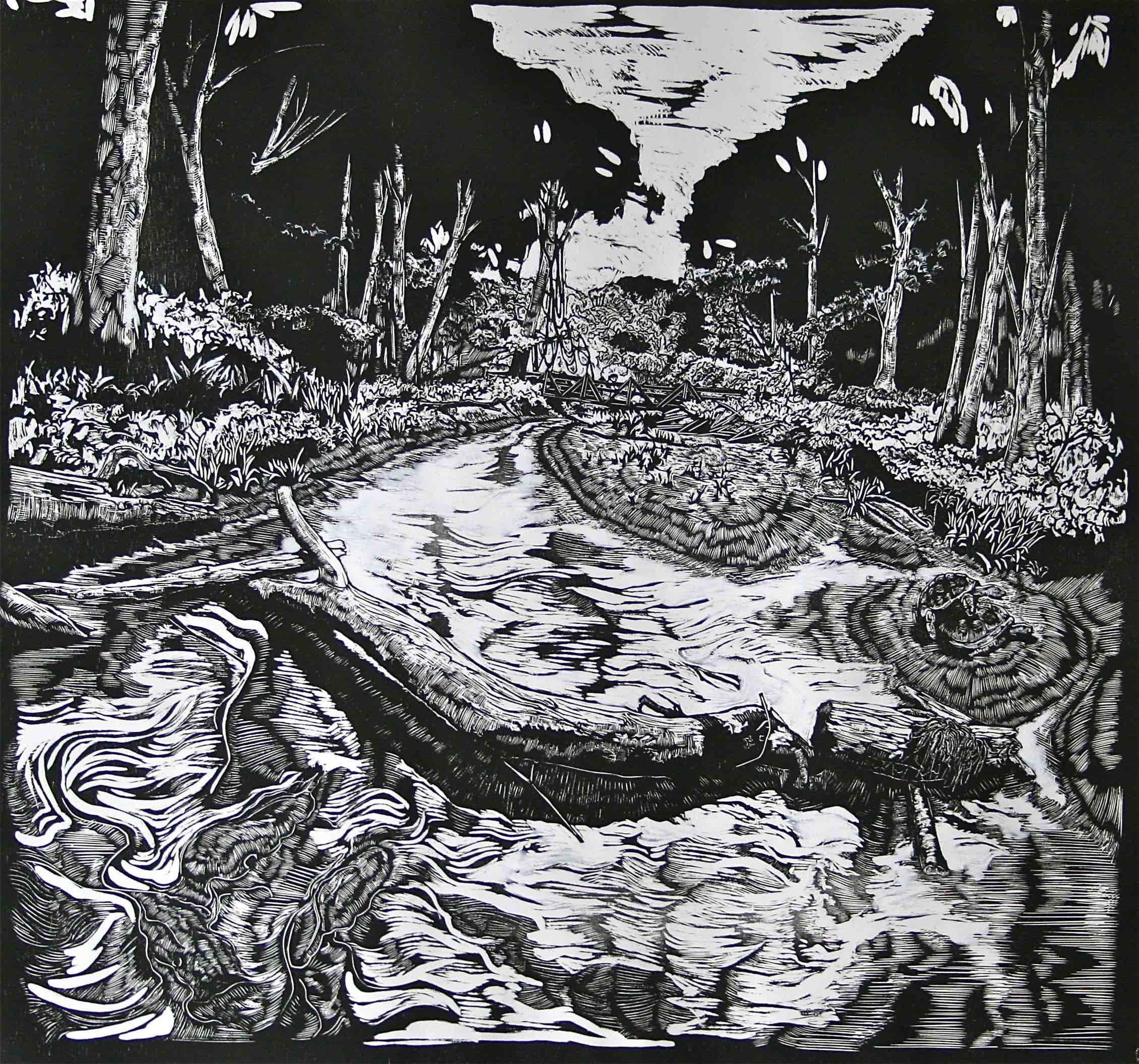 Omval is a reference to a small, delicate etching by Rembrandt, a restrike of which White was given as a young artist. It depicts a view across a bend in the Amstel River near Amsterdam that was a popular recreation spot in the 17th century. Virtually hidden in the shrubbery in the foreground of the picture is a “courting couple,” as primly described by the Rembrandt House Museum.

It struck White as a delightful wink and nudge by the artist, a bawdy moment of honest human behavior in the midst of an otherwise ordinary landscape. Such moments, along with fanciful creatures, well-drawn caricatures, and homely satire, were the staples of Northern European printmaking that resonated with White.

Take the print “The Forest Bridge,” for example, which follows a peaceful wooded view down a quiet river. Composed in White’s preferred perspective, the details in the foreground are especially magnified, leading the eye to discover some suspicious creatures in the water to the left and a pair of mating turtles on the sand bar to the right. 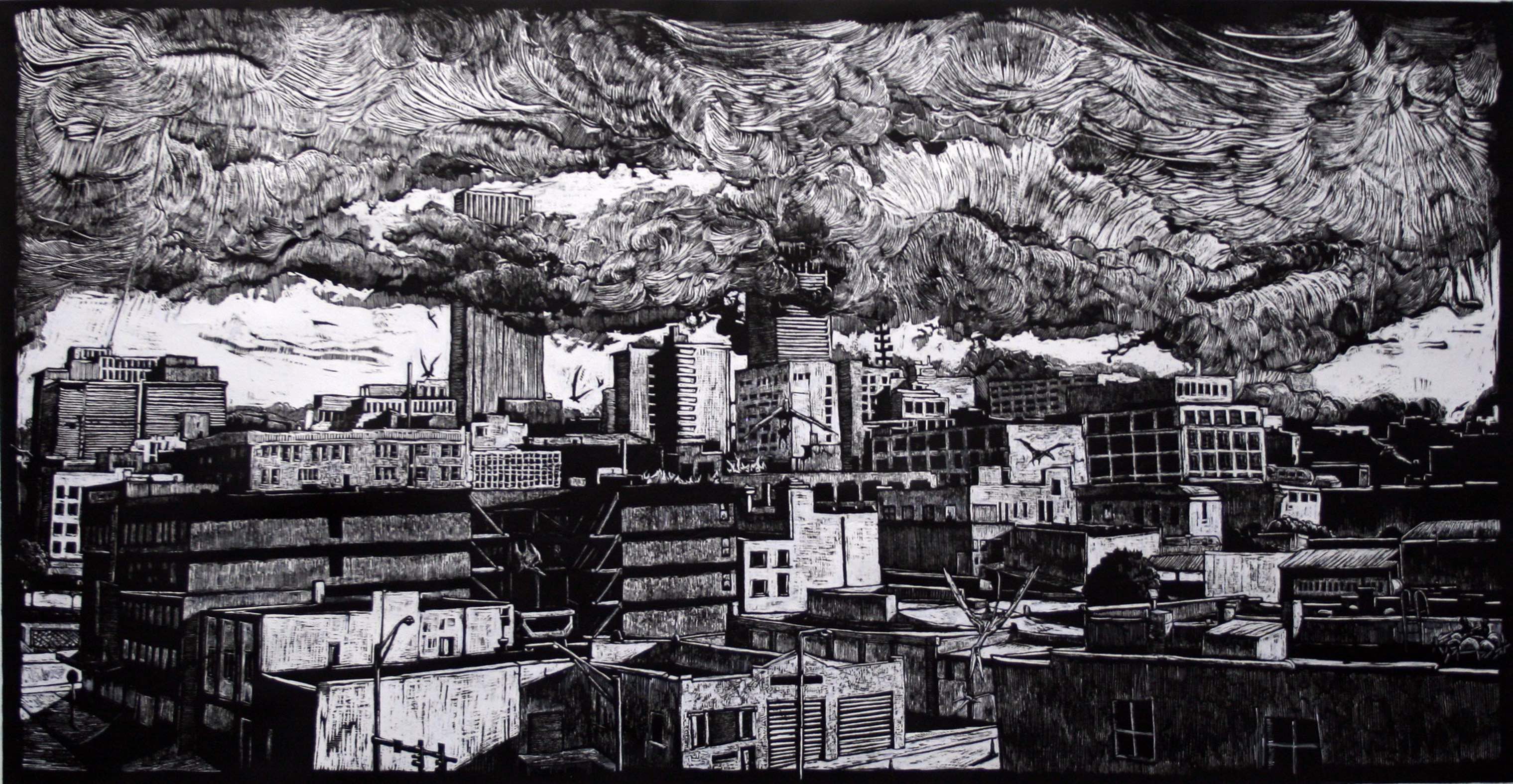 The woodcut “Ganymede” features a backyard view of urban chickens. A large flying rooster dominates the center of the composition, and the energy of its flapping wings is mirrored in the swirling sky above. A closer view of this otherwise ordinary domestic scene offers a little National Geographic primer on, well, just how chickens make eggs.

If White’s Edenic scenes offer portent, then other works seem more explicitly ominous, particularly “Invasive Species.” Its panoramic view of the Omaha skyline shows smoke billowing forth from the top of the Woodman Tower, filling the sky with roiling blackness. Pterodactyls soar above empty rooftops. This does not record a specific local event; instead the piece feels like 9/11 meets Dürer’s Apocalypse illustrations, with dinosaurs instead of dragons and St. George biding his time in the heavens above.

Clearly, one needn’t be an Old Master scholar to appreciate White’s artful appropriations, tweaking the past to engage the present. His observational studies of urban life coupled with his idiosyncratic fish-eye expressionism offer their own rewards. But check around for buried treasure—you may find it richly rewarding.

Watie White’s solo exhibit continues through March 19 in the Garden of the Zodiac Gallery in the Old Market Passageway, 1054 Howard St. For details and hours, call 402.341.1877. 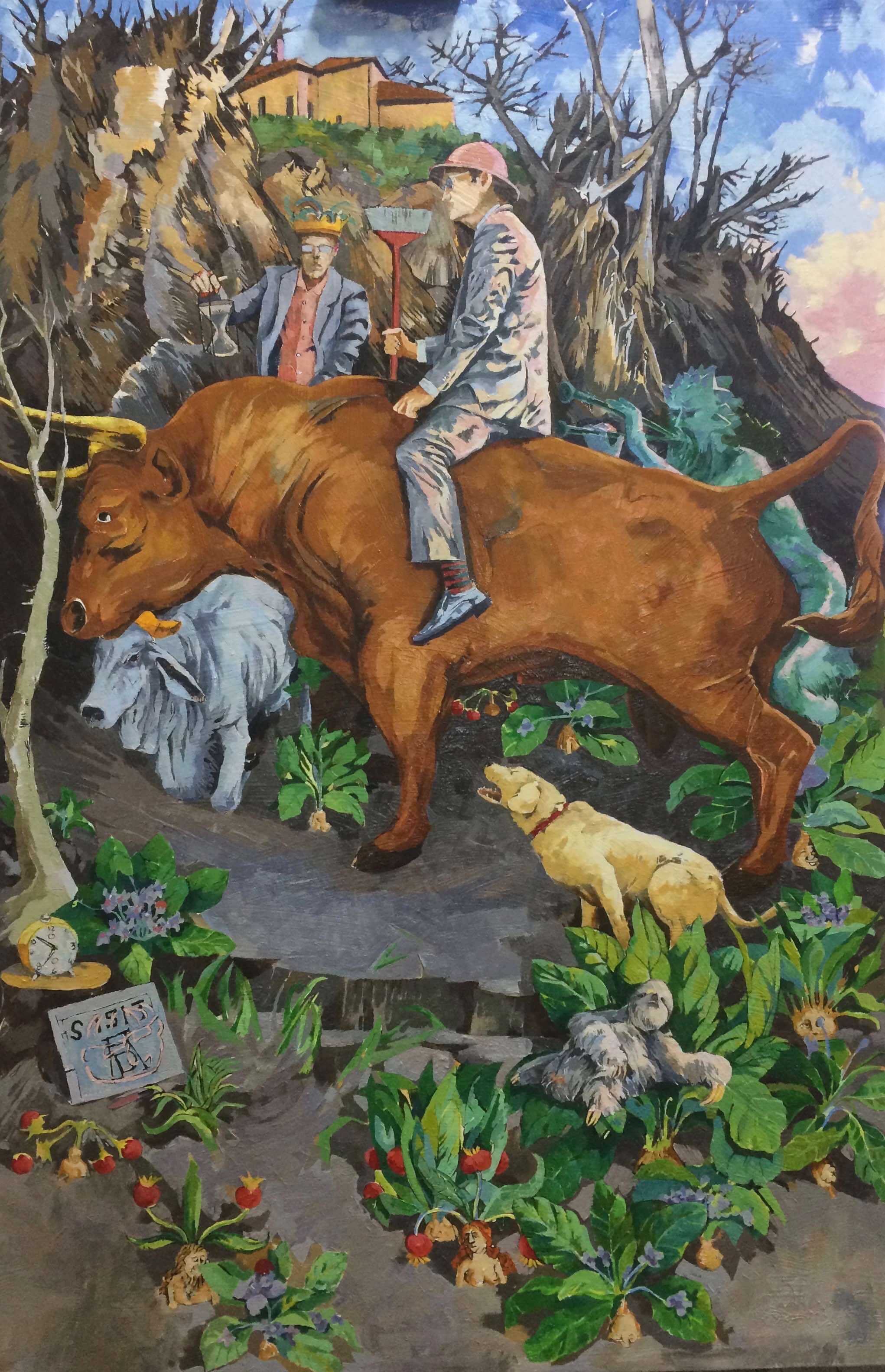