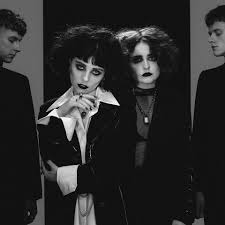 I have to ask Heather Baron-Gracie, the frontwoman of the Manchester band Pale Waves, about her image. Finding a genuine goth in pop music these days is near, if not completely, impossible and I would feel remiss if I didn’t ask what spurred this stylistic choice.

“The Cure is one of my favorite bands and I’ve always looked up to Robert Smith and admired his look,” she tells me before going on to note a less obvious influence. “Growing up, I always admired Avril Lavine as well. She was the first popular female pop artist to show up with baggy pants on and a chain from her jeans and a white tank top and a tie. I just really thought that was unique. She made it okay for girls to wear boys’ clothing.”

Not only do these two influences inform Baron-Gracie’s style, but it’s apparent to anyone that has listened to My Mind Makes Noises, the band’s debut album, that they make up the backbone of their music.

Pale Waves make pop music – and not some sort of low-key, indie pop either – the band is making pop with an eye on the charts, arenas, and festivals. Behind the Hot Topic makeup and ominous blood-red font of the record’s cover lies a bevy of anthemic, gossamer tunes that could slot into a playlist next to the likes of alternative stalwarts like, Vampire Weekend and Friendly Fires, or a major pop act like Taylor Swift.

Fellow Mancunians the 1975 were huge proponents of the band in the early going and it’s easy to see why. Both bands seamlessly blend synthy new wave with massive pop choruses. Songs like “There’s a Honey” and “Television Romance” bristle with the same nervous energy that has made the 1975 into one of the biggest bands in the world – a path which Pale Waves are trying hard to follow.

The band put on a triumphant set at this year’s Lollapalooza that coincided as part of a massive world tour and has been trying aggressively to spread the word about their music. “It feels like we’ve done things non-stop,” says Baron-Gracie. “We’ve been to Japan and Australia. We’ve been to American several times and we’re here again now so I think it’s just we’re giving people as much content as we can.”

Baron-Gracie says the group is also writing a new EP that they plan to record in February. While there have been rumblings that the new songs will go in a more punk-rock direction, Baron-Gracie makes it clear that the project will not be a total departure. “We’re gonna experiment more with the guitar tones and with distortion where we might not normally add it.”

Though there might be slight sonic differences between the new EP and My Mind Makes Noises, Baron-Gracie wants to make sure the two projects are tied together by what she considers to be strong, emotionally potent lyrics. Mental illness and hot-and-cold relationships are constant sources of inspiration for the 23-year-old.

“It’s definitely something I still fret about,” she says with an almost resigned sigh when talking about her romantic relationships. “I’m just that sort of person where I’m very manic and my emotions are sort of broken down constantly. That’s what I draw from in the videos and that’s where I get my energy from.”

“Some days I can be fine and other days I can be in a terrible state of mind, but when I feel like that that’s when the best songs are created. I’ll second guess myself and panic. I’ll wonder if I’m good enough to be doing this or if I can keep on doing this. It’s an image thing as well. I need constant reassurance. I need people to show that they care and that they have love for me,” she says before adding that she knows that it’s quite a strange thing to crave.

Though the songwriting process and touring can be extremely taxing, Baron-Gracie says it’s also the most rewarding thing she’s ever done.

“I’ve had multiple fans come up to me having breakdowns because of how much are lyrics meant to them,” she says. “It makes me feel okay to put my feelings out there like that because it makes them feel like they’re not alone. They find hope in it and that’s the best thing I could ask for.”