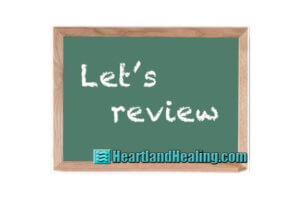 They say, “You can buy ‘em books and send ‘em to school but…” Well, the sentiment expressed therein would certainly coax someone to repeat the message. Finding by personal experience that not everyone reads every Heartland Healing column every time one comes out, there may be informational nuggets that get washed down the flume. Let’s recapture some of those tidbits to nourish the readers who didn’t read. So, in case you missed some of these, may we repeat.

Feel good dirt. It’s Spring, time to get out in the garden or at least put up some potted plants or herbs in the apartment. If you can get in the yard or a community plot, go for that. Bagged potted soil won’t have the best parts of Nature included. Here’s what we’re talking about. There is a bacterium that lives in normal, healthy topsoil called Mycobacterium vaccae. It doesn’t cause any diseases that we know of; quite the opposite. Multiple studies have shown that when humans come in contact with the bacteria, it causes serotonin release. That’s the “feel good” hormone. M. vaccae has been shown to boost the immune system, helping cure many diseases and alleviating depression. Worth getting your hands dirty. Dig it.

Grass fed beef only. If you’re going to eat beef, make it grass fed. Now, all cows eat grass, right? So beware, unscrupulous dissemblers will mislead. Beef from a properly raised cow that has eaten only grasses from calving to culling is the only beef we should eat. But modern, industrial beef gets fed all sorts of stuff and a big one is corn. Cows should not eat corn. It’s not good for them. Remember the nursery rhyme, “Little Boy Blue come blow your horn. The sheep’s in the meadow and the cow’s in the corn.” Well, why exactly should the alarum go out? Because left to their own devices, cows will eat enough corn to kill them. They are designed by nature not to eat corn. But modern livestock practices feed them corn to make them grow fast and fat. It also changes the nutritional profile of the meat and causes a host of other problems, ranging from bad effects on human health to environmental disaster. It’s this reality that gives a shred of legitimacy to some of the new crazy politicos calling for a ban on eating meat. We don’t have to go that far. True grass fed and finished beef is good for the environment.

Yes, RoundUp is a killer. It absolutely amazes me to see people pacing their yards amid puffs of poison from little plastic wands. They are spraying versions of glyphosate on the grass to kill whatever it is that annoys their pointy little pea-brained heads. Look, the stuff is toxic. Numerous agencies and researchers have declared it a cause of cancer. Lawsuits have found the manufacturers culpable and awarded cancer-wracked long-time users millions of dollars in damages. There is no logical rationale to keep exposing ourselves to it. Put it away. Get rid of it. Take it to UnderTheSink.org on 120th Street.

Vaccines: No, not really. Let’s just look at one vaccine, maybe the most popular elective one — the flu shot. Read this fact directly from Centers for Disease Control data: Since 2011, the flu vaccine has averaged only 42% effective. Ask yourself, if you went to buy a television and the salesman said that over half the time when you get it home it won’t work, would you go ahead and buy it? Then consider that the CDC and media use misleading and false reports to inflate the actual danger of flu. Admittedly, the topic of vaccines is fraught. But don’t you think that if they have to sell it so hard there might be something suspicious about that? And if nefarious media like Facebook and Twitter are actually censoring people with opposing data, don’t you wonder? I do.

The Microbiome drives your car. Sat with a second-year medical student last week. We fell into a conversation about addiction. I dropped an allusion to the trillions of non-human cells that make up 90 percent of the human body. Her eyes went blank and she knew little of which I spoke. Well, it’s true. Most of the cells in the human body are not human cells. Fungi, parasites, bacteria by the trillions have vital impact on our lives. In fact, they could easily be the single most influential part of our body. Those organisms, mostly living in the gut, digest food, produce required enzymes and vitamins, organize and run the immune system, eliminate toxins and dozens of other functions that without which, we would not exist. Treat them well. Do not encourage them with foods that make them wacky, like sugar or alcohol. The microbiome menagerie can be beneficial boosters of our health or demanding interlopers leading us down the wrong path. Learn more about it. It’s fact. And hopefully the next doctor you go to will know a little bit more than the last.