Imagine a contest. Give two artists aluminum panels to serve as their canvas. Instruct them that unmodulated color must be a primary feature of their works and that their mark making may only consist of line.

The result could take many forms, but could very well look something like the current exhibition at Modern Arts Midtown, contrasting the elegant and exacting striped surfaces of Matthew Kluber with the highly textured, exuberant compositions of Colin C. Smith.

For many years, Omaha artist Smith has made work that hovers between traditional painting, graphic design and sign making. He has consistently preferred the industrial, flat and uninflected surface of aluminum. For years, it was the support for pigments applied in an equally sleek, non-painterly manner; his polished, stenciled and airbrushed designs called to mind a range of allied trades, from advertising display to automotive detailing.

A happy accident in the studio several years ago, however, pulled Smith away from a minimalist-cum-retro design aesthetic into a kind of maximalist pseudo-expressionism. When pigment mixed with an undisclosed resinous material, the chemical reaction resulted in a bubbly, lumpy hardened colored foam that the artist affectionately terms “gunk.”

At its most folky, the material resembles the accumulation of candle wax drippings on Chianti bottles that used to be an Italian restaurant décor staple, or of the childhood joys of extruding with the Play-Doh Fun Factory. And Smith has deployed it in a variety of formats that celebrate its whimsy, from making colorful parfaits in glass stemware (“Gunk Cordials”) or taking deep dish pizza pans, setting them on casters, and filling them with mounds of the brightly hued goo (“Piles”).

This exhibition, however, largely features Smith’s investigations in bringing this literal materiality to the vocabulary of painting. Onto his aluminum supports, he now applies lines of gunk, sometimes short, staccato ones, other times stretching the full length or width of the panel. The results are dense accumulations of thick wobbly lines, each in a pure hue, which read as overtly textured fields of color.

Smith’s compositions might be described as linear geometric abstractions in which rectangular bars of contrasting hues anchor the flow of the main field of color. Each is painted, for lack of a more precise verb, onto his characteristic aluminum panels.

All of these, it must be noted, have some sort of rounded edge—Smith has used a shaped support for nearly the entirety of his oeuvre. More than anything, it disrupts the customary relationship between the rectangular edges of a traditional canvas and the geometric forms within it—“the grid”, in art speak. It instead enhances the materiality, the thingness of his artworks, already amped up to eleven by this choice of medium.

Smith’s shapes vary considerably, from rectangles with rounded off corners to long, narrow ellipses. Intentionally or not, they call to mind any number of objects, including skateboard decks, pills/capsules, Band-Aids, and cell phones, all the while grappling with the usual stuff of art—form, interval, color harmony, scale, and so on.

Certain subtleties of Smith’s compositions become apparent once viewers put aside a natural fascination with his lab-created impasto. Consider “Actively Waiting”, an ovoid artwork characterized by vertical striations in greens and blues, with an inset of orange and red bands of horizontal color located in the middle of the painting along its top edge.

At first glance, the eye notes that the inset rectangles are at the center of the composition, and a quick spin around the room confirms that Smith enjoys playing with mirroring in this way. But look again, because these elements are off center, shifted ever so slightly to the left or right, all subtly asymmetrical. Like his often zippy palette and unconventional medium, this is all part of the play.

If Smith is wryly re-litigating Abstract Expressionism’s gestural side with his self-inflating pigments and Color Field painting with his goopy striped optics, then Kluber is rebooting geometric abstraction by using digital technology as context and construct.

Kluber, who is art department chair at Grinnell College and maintains a studio in Iowa City, uses the pinstripe as his mark of choice. His compositions, usually horizontal, feature bands of paint generally of the same width, but in varying lengths to create the appearance of color blocks. Unlike Smith’s work, Kluber’s stripes are hard edged, flat, straight, nearly perfect, as if digitally rendered. Which is part of the idea.

Kluber’s point of departure in determining form, palette and interval is from the intersection of painting tradition with the expanding digital space in which we increasingly live; as he describes, a locus where the physical world meets the virtual one.

An artist with a background in printmaking, he has long gravitated toward an approach to non-figurative work that meditates on reconciling an artist’s individual aesthetics with abstraction’s sometimes “authorless” style and printmaking’s often detached aspects of mechanical reproduction.

As the result of his own happy accident in the studio, Kluber’s computer crashed while installing some updated software, and as the data morphed into narrow horizontal strips of color, the artist had an epiphany. The visual experience of data destruction and imperfection had become source material for creation and invention. The ways he approached constructing code-influenced compositions are borne out in the paintings in the exhibition.

There are the “traditional” paintings, the aforementioned crisp geometric abstractions. Exactingly even lines of color are laid in alkyd (an oil-based paint), and are achieved through use of vinyl masks adapted from car detailing techniques. Kluber’s choice of aluminum panel also allows him to keep his surfaces pristine and maintain their emphasis on the optical experience of shifting color and shapes, rather than dwell on process or facture.

“Friday I’m In Love” is just such a painting. It is a large panel consisting of a field of razor sharp horizontal lines in alternating hues along the red-orange-gold spectrum; in the middle third of the composition, bands of cyan are threaded across and short sections of green create vertical blocks of color at each end. The result is a composition with a pulsing, almost strobing effect.

Kluber’s fascination, however, did not end with translating the computer experience into the forms and chromatic keys of a traditional artwork. Instead, he set about turning many of his artworks into moving pictures with the addition of digital projection, turning hardware into a painting tool.

“Half-Day Closing” is the show’s singular example of this new approach to energizing the painted object. Onto one of his typical striped compositions, Kluber overlays a customized projection of shapes, shadows and colors that spread from the inside to the edges, move right to left then back again, all in random, non-repeating patterns. Depending on the graphics, the projection may enhance or completely alter perception of its backdrop.

The results are mesmerizing. Projection and painting melt together visually; color seems both solid and immaterial. The eye, having difficulty discerning the fact of it, gives itself up to tracing the rhythmic, cinematic experience. The palpable physicality of Kluber’s illusionism is reminiscent of light installations by James Turrell—one of several pioneering artists exploring light and space in their works—who made luminous color and visual perception the sole property of his art.

This format also offers Kluber a chance to make a single artwork—the actual painted object—into a veritable series of related compositions, each combination of projected forms giving it a new color story, pattern and focal point. The projections massage both the left and right brain: the works are formal and intellectual, emotional and dreamy, and downright seductive.

The contrast between Kluber’s and Smith’s approaches is instructive and effective, often a challenge for two-artist shows. Despite their differences, each is engaged in the transformative effect of color space using the most essential of forms. And each grapples with the implications of art’s material properties. Perhaps, after all, they are of the same stripe. 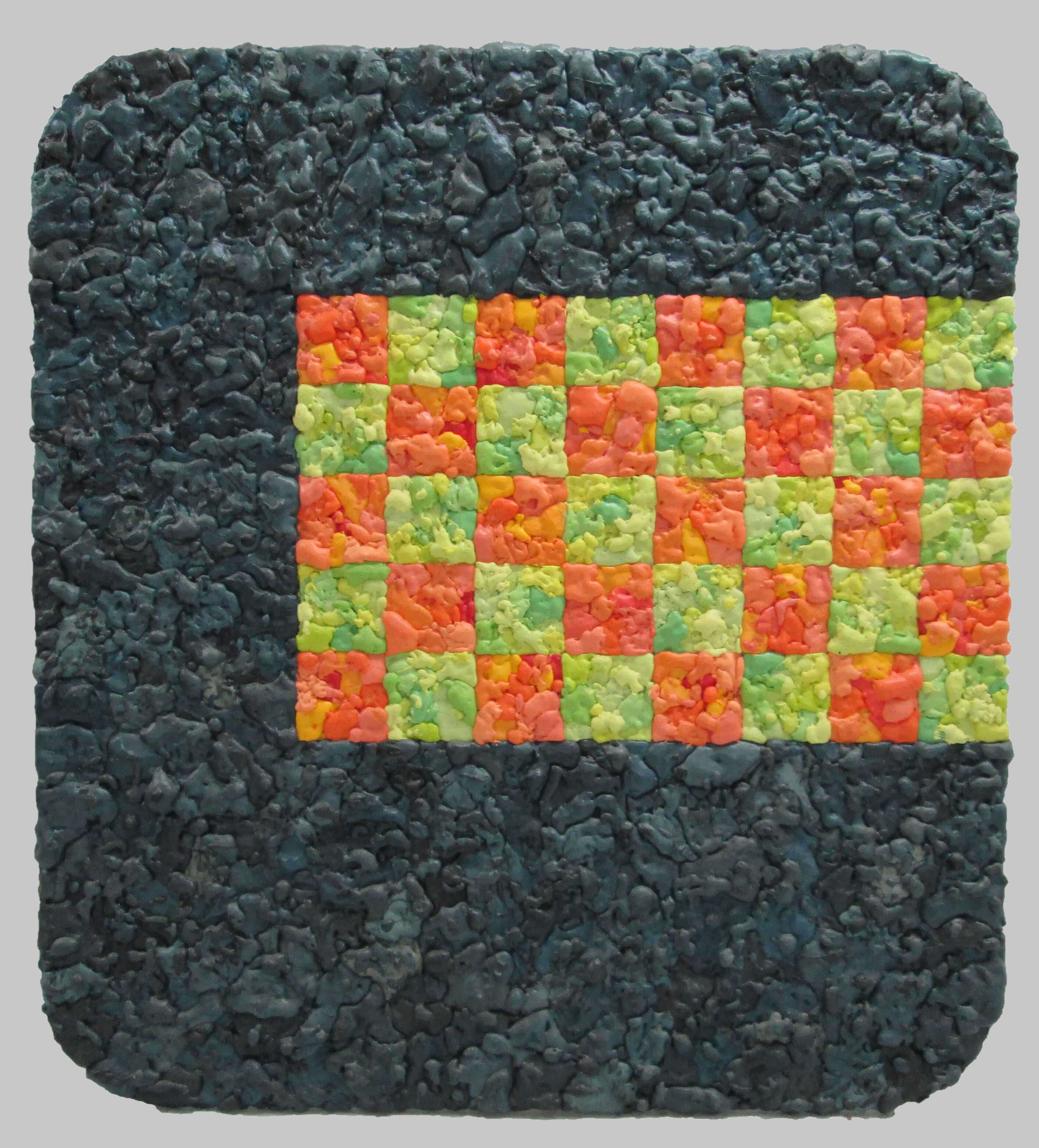