Home » Uncategorized » RAGTIME at the Omaha Community Playhouse Reflects on Nostalgia, The American Dream At the Turn of the Century

On the cusp of the turn of the century in 1902, there was a laissez-faire mentality in society and an Edwardian lifestyle often dotted with the leisurely pastimes of tennis, baseball, tea parties, and lazy afternoons. This narrative sets the scene for the start of the show and company number, “Ragtime.”  The curtain draws, and with an air of sophistication and grace, men and women of the upper echelon stand in block formation, singing with their parasols held overhead. In one word the opening scene is picturesque. Quaint. Exquisite garb such as ivory tea dresses following the pattern of 20th century fashion, white suits, plumed hats, and delicate lace parasols are the focal point. It’s demure and elegantly depicted, a symbol of wealth and prestige.

Bit by bit, African Americans and immigrants are introduced, a stark contrast from the white debonair socialites. Their music is a mélange of melodic syncopation and their movement Latvian and Italian folk dance; a patchwork of the American Dream so many sought to find. As each social class is introduced, from the high class to a clan of immigrants, groups glide across the stage and in one moment stop momentarily in a pinwheel formation, separated by race. This intentional moment of choreography perfectly presents the ideology and prejudice of the times. Each scene depicts a narrative that paints an impression, a tableau vivant reflecting the expressionism art form of that era. 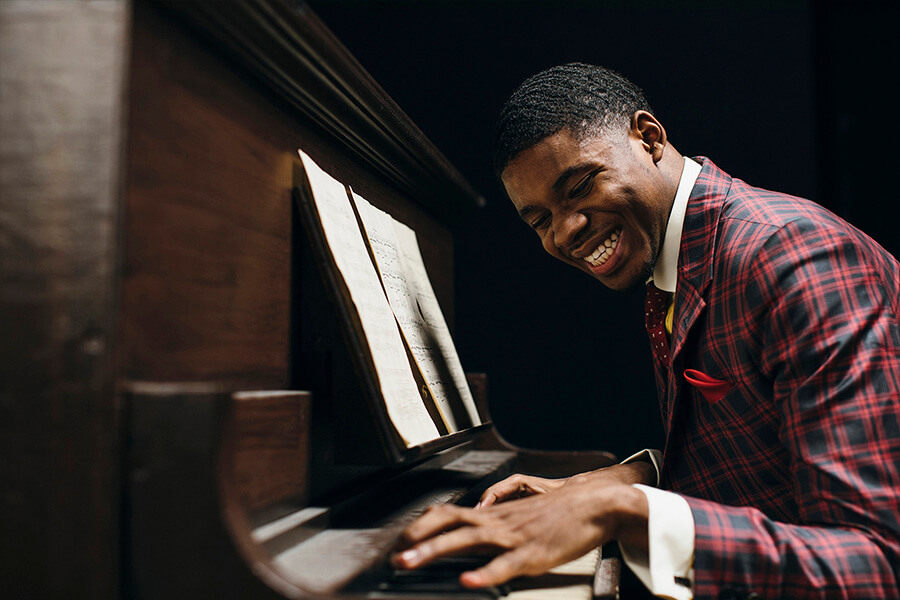 Ragtime, which opened at the Omaha Community Playhouse May 31, takes place in New Rochelle, a landmark haven where French Huguenots first settled on the upper east coast of New York. The production opened on Broadway January of 1998, and was revived again in 2009. The novel by E. L. Doctorow served as inspiration for the 4-time Tony award winning musical. The musical’s book is by Terrence McNally, with lyrics written by Lynn Ahrens and music by Stephen Flahtery.

Each character relays a narrative as they sing and stop to tell a story. Historical figures such as Harry Houdini, Emma Goldman, Henry Ford, Booker T. Washington, and Evelyn Nesbit are featured roles that make cameo appearances. Just like the novel it is based upon; historical fact is blended with fiction. Evelyn Nesbit, the girl on the swing and glamorous vaudevillian chanteuse “It Girl,” became the poster child for Gibson girl inspired coiffures, commercial materialism, and her scandalous affairs to billionaires with arch rivals made her a star. Played by Megan Kelly, Evelyn is a hoot with her flamboyant charm and over the top persona, (“The Crime of the Century.”)

Mother (Jodie Vaccaro) is progressive in her own right and develops a newfound independence in as she finds balance between managing the household and the family business. Vaccaro has a lovely, uplifting soprano voice that emotionally follows the progression of her character’s self-discovery. Mother finds an African American woman’s child buried alive while tending the garden and opens both her heart and hearth to the infant and his mother Sarah. Father on the other hand, (Paul Tranisi,) is less keen on inviting the minority lower class into his life and is gone for months at a time on an arctic expedition. Younger Brother (Jon Flower,) pines after Evelyn and The Little Boy ( Dominic Torres,) is always comically one step ahead of the adults.

Coalhouse Walker ( J. Isaiah Smith) is a zealous Harlem entertainer who tickles the ivories playing ragtime music for his sweetheart Sarah (Dara Hogan). She has a few skeletons in her closet to speak of and secrets to hide, but after a period passes by reconnects with Coalhouse (“Wheels Of A Dream”) as they take his Model T out for a picnic on an outing. A racist encounter brings on dire repercussions and tragedy. Fueling Coalhouse to fight for justice and equality (“Make Them Hear You”).

The Smith brothers, J. Isaiah and Jordan, are dynamic powerhouses on stage. Their voices resonate with brilliance and pack a strong delivery. J. Isaiah’s rich, deep toned vocals as Coalhouse bring down the house. You feel his ardent love and the rage of his demise in his evolving character arc. Seeking justice he employs the help of Younger Brother and Booker T. Washington along the way, as he takes siege of the J.P. Morgan Library. Jordan as Booker T. Washington is representative of a solid voice of reason, narrating with pure, emotive vocals. Tateh’s rags to riches story as an impoverished Jewish immigrant who becomes a success is inspiring.  Played by Mike Palmreuter, Tateh is charismatic, and three dimensional, giving us a realistic glimpse into his struggles and triumphs.

As detailed in the story that Ragtime tells, the different social classes are very distinct and hostility is evident, conveyed subliminally through both song and movement. Pejorative terms are referenced throughout alluding to the blatant existence of racism. Although that can be a little jarring at times, the show addresses the white elephant in the room eloquently with tact, and within a historical context. And while racism is indeed a prominent theme throughout, it does not detract from the overall storyline. A feel-good moment is when walls are torn down and a sense of unity and brotherhood between the characters happens. Each group is no different from the other, and as the musical points out, sometimes there are battles that are more than black or white.

Ragtime runs May 31-June 30th at the Omaha Community Playhouse in the Hawks Mainstage Theatre. Performances are held Wednesdays through Saturdays at 7:30 p.m. and Sundays at 2 p.m. Tickets can be purchased by calling the OCP Box Office at 402-553-0800.