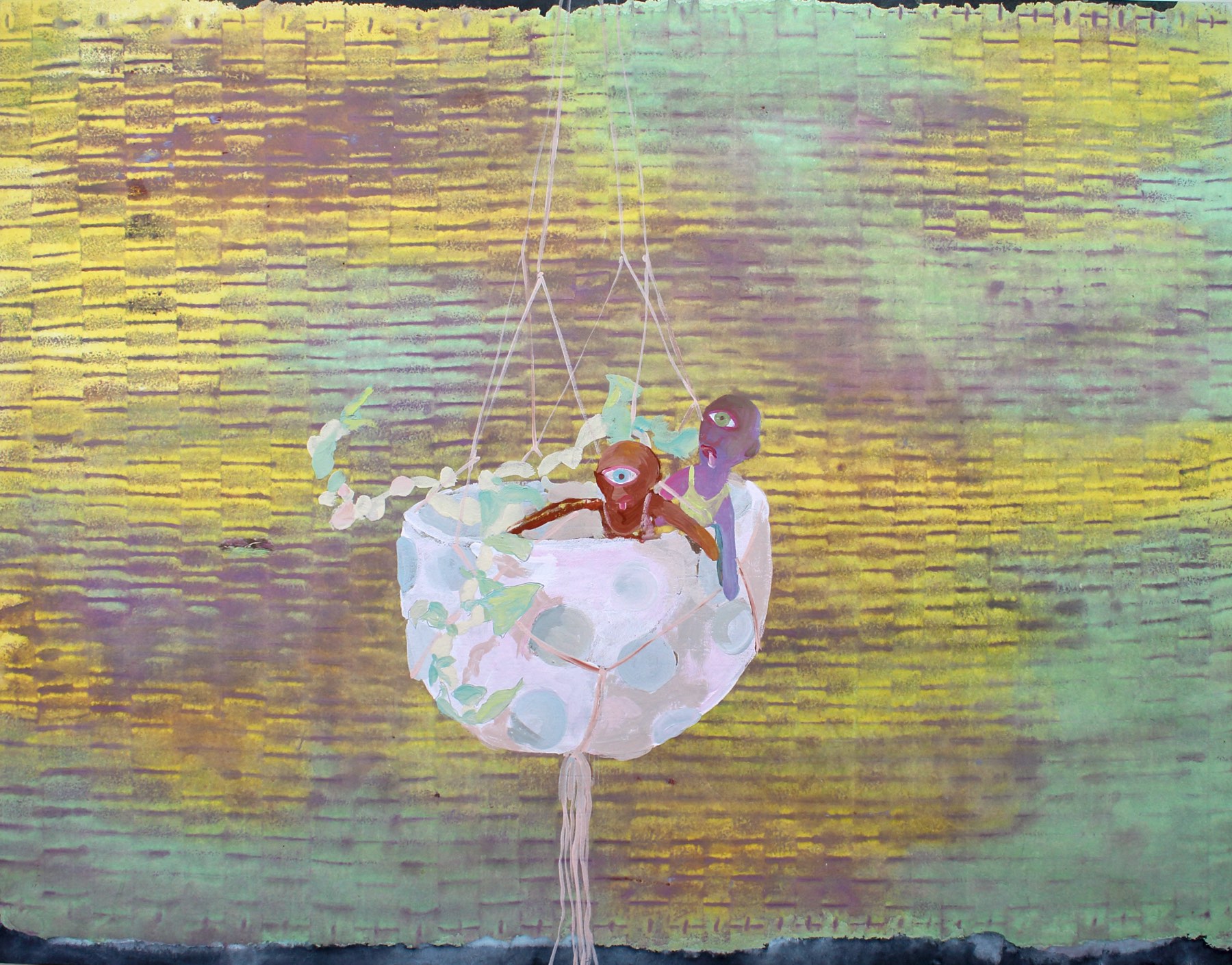 In its continuing effort to provide provocative and vital exhibits, the Michael Phipps Gallery at the W. Dale Clark Library presents a new exhibit by artist Victoria Hoyt titled Twenty-six Forms Relating, which continues through Feb. 26. Of a style often referred to as Outsider or Naïve, Hoyt’s works initially may remind you of a child’s drawings, innocent and primitive.

Not exactly Outsider Art, not exactly Primitive, and definitely not Naïve, Hoyt has a liberal graphic vocabulary that translates her very personal inspirations into stories, illustrated montages and parables that are relevant and insightful and sometimes droll.

Inspired by the iconic children’s alphabet book, with 26 related images displayed around the gallery, these works provide allegories to life’s many complexities. Think “A is for Apple,” but substitute Anxiety, and you’ll quickly get the gist.

Commiserate with the whimsy and craftsmanship of Hoyt’s style, and limiting works to a comfortable number and size, curator Alex Priest has kept the show cohesive and engaging. Included as part of the show, but by no means necessary, is a small, eight-page booklet, a short prose/poem by the artist, annotating the work.

Hoyt is unencumbered by the technical or by draftsmanship. Or edges and squares and rectangles, for that matter. This is a good thing. Artists in general are free to “color outside the lines,” to use any materials to communicate, but she is mature enough as an artist to limit her palette to some repeated imagery, patterns and techniques which help most of the works relate as a group and keep her exclusive hand evident.

Avoiding haphazardness, her skills come to light in the playfully innocent, sometimes humorous primitive figures and child-like drawings, combined with abstract color fields and pattern motifs. Add some sequins, some yarn, sew it all together into a non-traditional arrangement of shapes, and the result is a fine group of purposeful, designed assemblages; collages of both recognizable and obscure imagery, abstractions and patterns, many eliciting “native” (African, South American and East Indian) overtones. 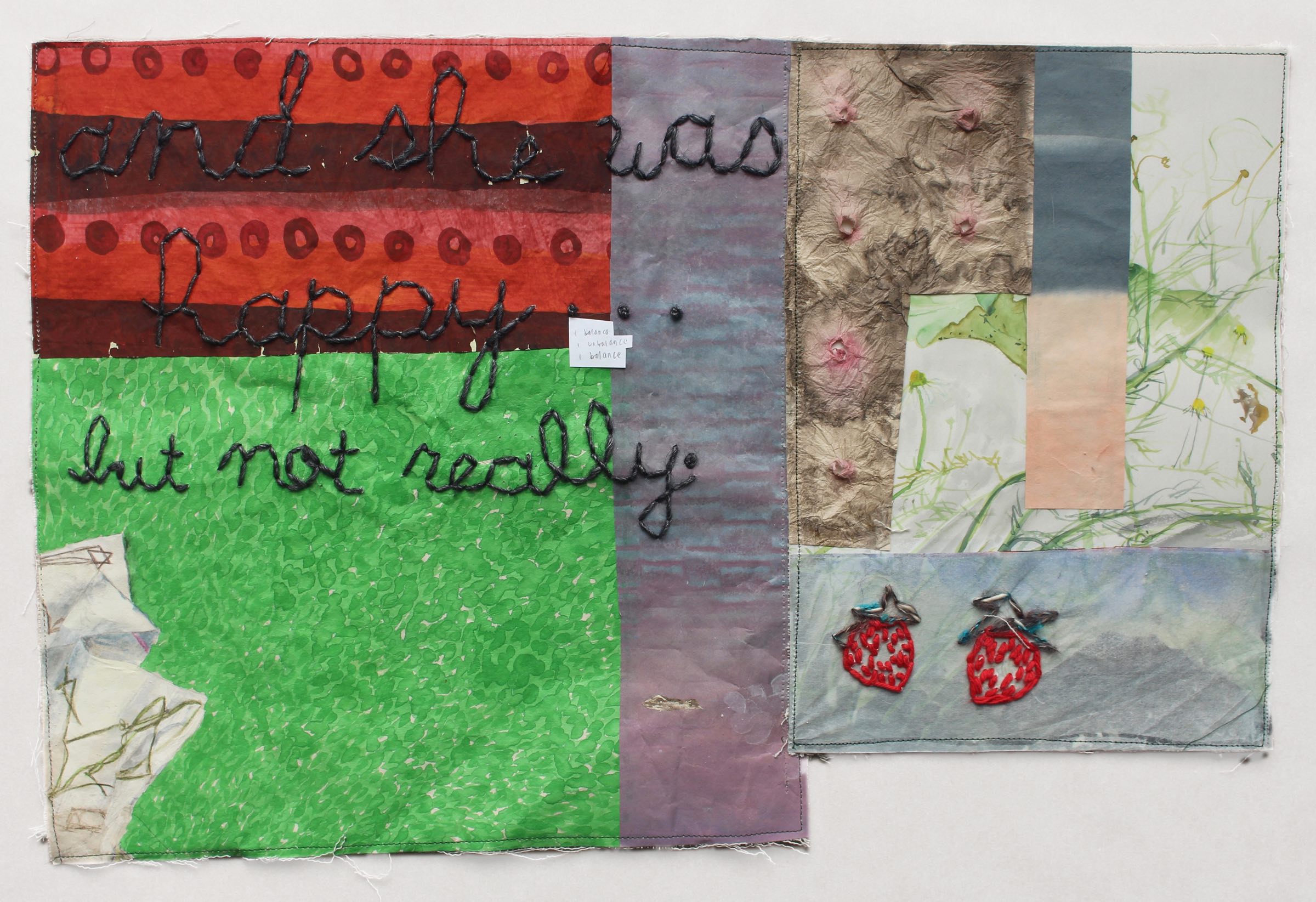 Initially a disparate collection of drawings and colors and shapes, Hoyts effective compositional prowess models each into a effective individual work. V is for vision for instance, is like a craft souvenir from an African trek, blocks of earth tones of browns and yellow hold everything together, set off by a subtle sea of grey green netting, populated by a lone imp in goggles.

The figure is defiantly following, leading or leaving, or maybe just lollygagging. A trio of vulvar seashell forms, horizontally posited to resemble a face, stares out judgmentally in the upper right.

Another notable image is D is for dis-, a boldly aggressive image more starkly constructed than most of the others. A large, red bowl against a stark white background, a decorated vessel with clean sharp edges, maybe native American (or South American,) is severed (dislocated) by a purely domestic “room,” with a collage of cutout table and chairs on a grid, evoking a modern kitchen with a tile floor.

The lone figure at the table looks abandoned and next to her(?) is a remnant of text, apparently from a Journal of Women’s History, and a ghostly amorphous shape, hovering at the head of the table, of more text. 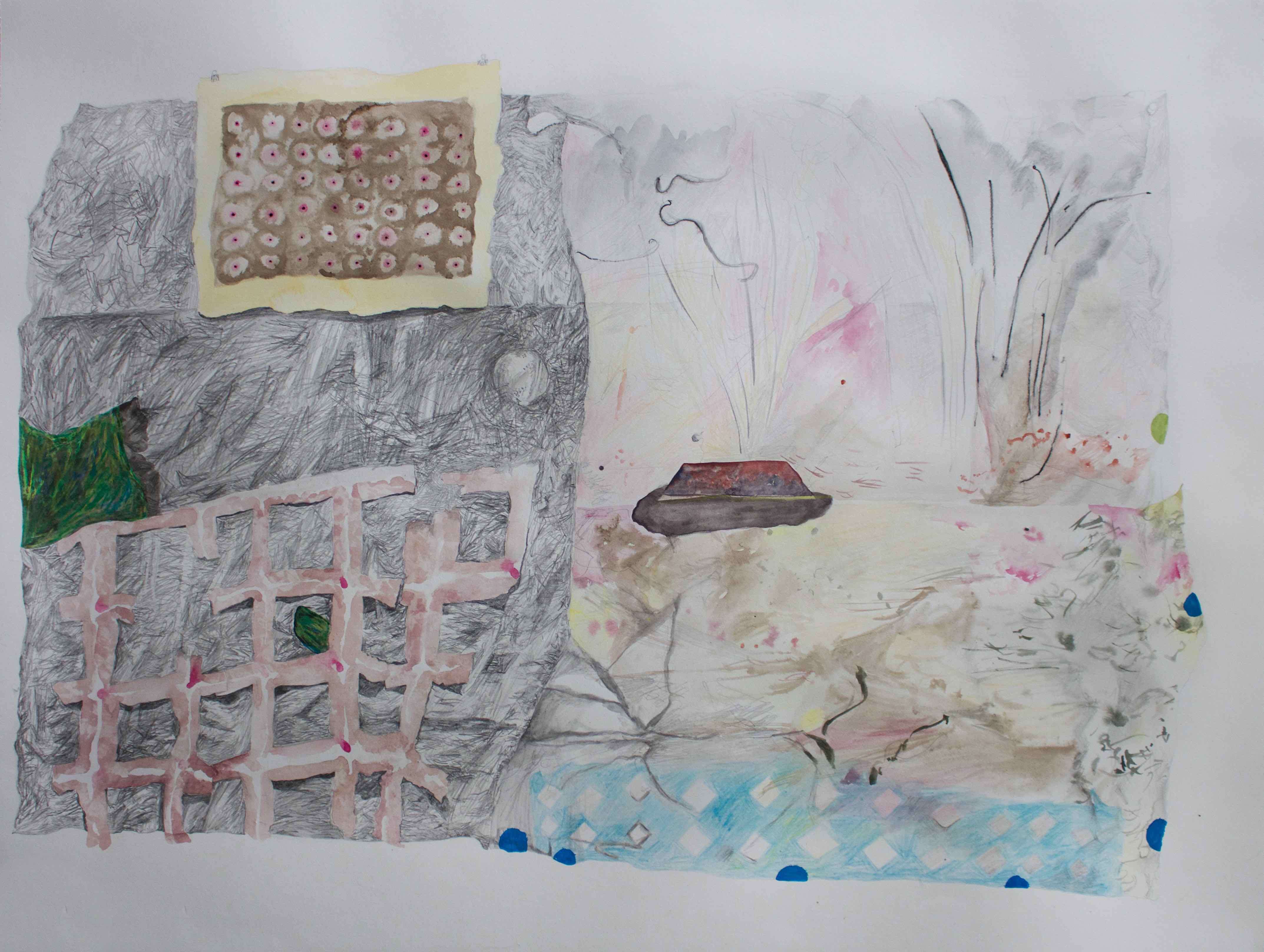 Several repeated subjects carry through the show; swimmers, often with goggles; figures, child-like, myopic and sometimes active; another, a matriarchal icon; a textural relief emulating a newly extinct volcano, suggestive of the depleted mother, sapped and exhausted; and a lone figure in an open sea, or trapped in a net; grid patterns, of fish, of stylized plants or leaves, of simple lines. The metaphors are not always immediately obvious, and are helped along by way of title and the accompanying booklet, or embroidered or drawn phrases within the piece.

The innocuous black and white booklet that accompanies the show is helpful in connecting the work. It’s a “small story,” that helps to relate the pieces to each other and to life and the creative process in all its guises, and it is necessary for a thorough fulfillment of the artist’s intent of connecting these pieces as the show’s title indicates.

The booklet could have been more prominently constructed and displayed, but this reviewer viewed the exhibit first without it, and had no regrets. It was very enjoyable to wander through this exhibit and contemplate and analyze without guidance or explanation.

A third piece that must be mentioned is O is for Outside, a delightful and disturbing jumble of broken watercolor and ink sketches, terminating with a goggled swimmer, on top of blocks of color.

Reminiscent of a designer’s schematic site plan, complete with house at the bottom and, in the side yard, a disconcerting figure, that of feral cat. Well, I think it’s a cat. At the bottom is an embroidered phrase that in most other cases might be overplayed, but here, in the guise of a child’s drawing, it works.

Several of the works contain these written phrases and words within the art itself, in most cases it is used to guide and clarify, and is not uncommon in illustration and iconic children’s drawings. A few of these works teeter into that realm of patronizing, but Hoyts sensitivity to the imagery, occasional humorous overtones, and in the guise of juvenile illustration, she avoids this.

Victoria Hoyt stays honest to her whims and is able to tap very personal imagery in constructing meaningful work that is complex and inviting.

Twenty-six Forms Relating continues in the Michael Phipps Gallery, in the Southeast corner of the first floor of the downtown branch of the Omaha Public Library. The exhibit, featuring new work by artist Victoria Hoyt, is free and open to the public during library hours. The show is on view through February 26th. For gallery details and more information, go to omahalibrary.org.