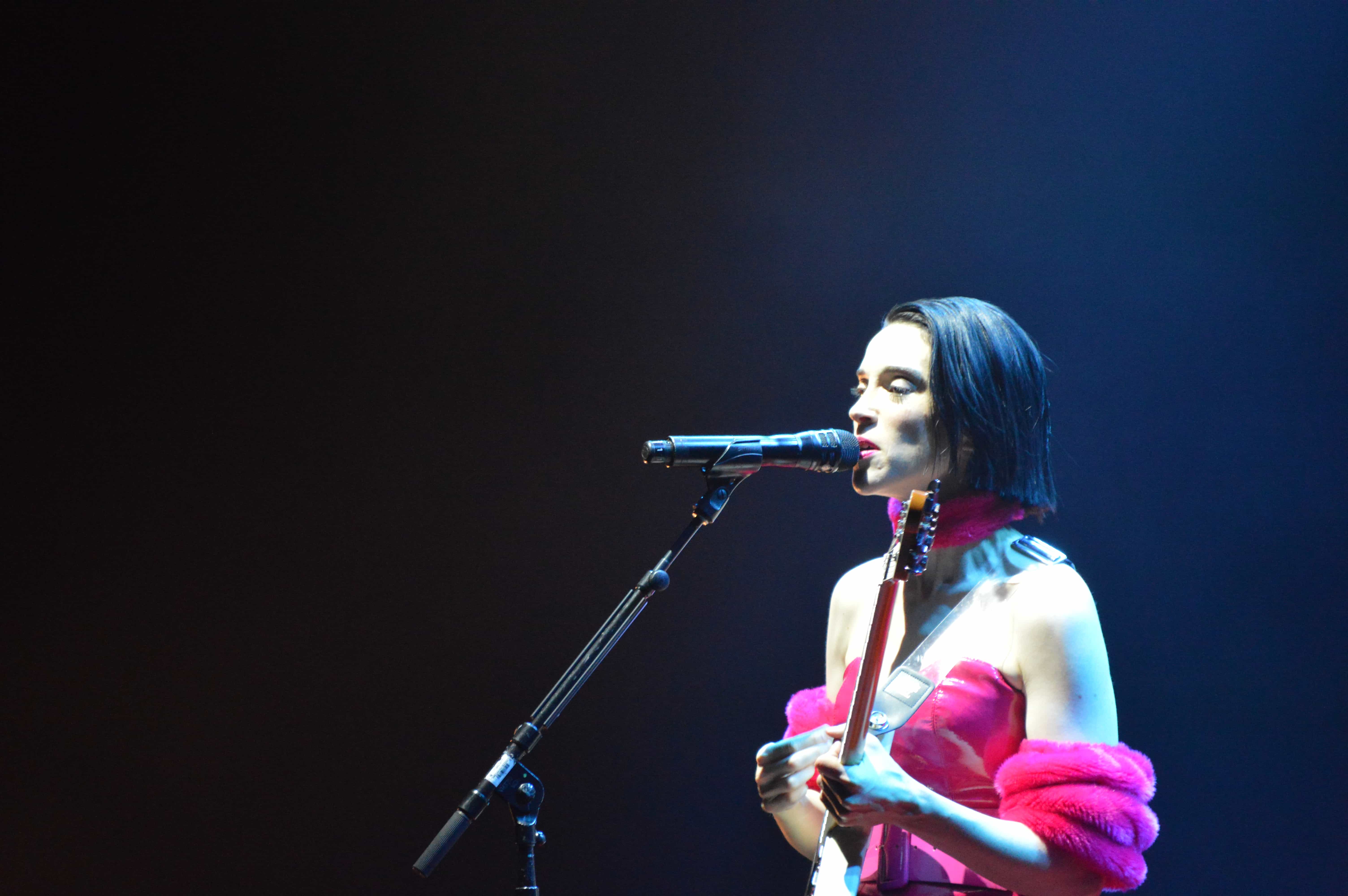 Annie Clark, the singer and guitarist behind St. Vincent, mixed performance art with rock and roll for her Saturday night show at the Holland Performing Arts Center. The guitar goddess performed alone to a nearly sold-out crowd as part of her Fear the Future Tour.

Opening for Clark was San Francisco jazz duo Tuck and Patti. Oddly enough, Patricia “Patti” Cathcart Andress and William Charles “Tuck” Andress are Clark’s aunt and uncle, and they repeatedly told the audience how special it was to be able to tour alongside their niece. Dressed completely in white, Tuck and Patti ran through a combination of original material and covers including a particularly beautiful rendition of Jimi Hendrix’s  “The Wind Cries Mary” that moved the woman in the seat next to me to tears. The duo acted as a nice counterpoint to the weirdness of their niece’s headlining set.

Sections of the curtain peeled away as Clark chronologically ran through a collection of hits from her first four records. The setlist did an excellent job of showcasing her stylistic range as Clark moved from the spacey harmonics of “Now, Now” to the straight-forward rock of “Actor Out Of Work” to a sludgy, fuzzed-out version of “Cheerleader.” Clark ended the first half of the show with a particularly twitchy version of the Talking Heads-indebted “Birth in Reverse.”

After a five-minute intermission, Clark returned to the newly-arranged stage sporting a sleek, silver dress. She proceeded to play her latest album, 2017’s smash MASSEDUCTION, from front to back. Though the album is only a few months old, it already feels like a “best of” compilation and a culmination of everything Clark has done up to this point. The album’s first half offered plenty of idiosyncratic, electrically-tinged rockers for Clark to shred to including “Pills,” “Masseduction,” and a stadium-sized version “Los Ageless.” In contrast, touching ballads like “Happy Birthday, Johnny” and “New York” showed Clark tackling the loss of friends and breakdown of relationships with an incredible restraint on guitar and a bruised vocal delivery.

All of this was reflected beautifully by the video and light show that played throughout the set’s second half. Mirroring the pop art aesthetic from MASSEDUCTION artwork, it sucked the audience even further into St. Vincent’s universe. Strange, gif-like videos featured everything from telephone cakes to supermodels to disembodied limbs and played up the dark, cartoonish aspects of Clark’s music while simple, muted colors helped to add weight to the set’s more poignant moments.

The overall experience was a surreal, sensory-numbing whirlwind of fun. We may only be two weeks into the new year, but consider the bar for concerts set.