In order to successfully stage a production of The Rocky Horror Show that’s one element you really need, because having an audience who is actively engaged and in the moment is what makes the experience what it has come to be. In fact, it’s almost mandatory so to speak. To say Rocky Horror has amassed a cult following is an understatement. The 1975 film starring Tim Curry was an initial box office flop that quickly gained momentum with late night showings, materializing into a timeless, iconic film driven by pop culture popularity. In Omaha at the Howard Drew Theatre, The Rocky Horror Show opened last Thursday with much “an-ti-ci-pa-tion.” The crowd was immersed in the interaction of the characters, plot, and props prompting you to get involved en lieu of a marquee mounted on a cinema theatre set. And if you know the story, you know what lines to shout out and when to cover your head with a newspaper. The Rocky Horror Show is in your face entertainment and is an eye-opening experience to say the least. Known as the show that pushes the envelope, it celebrates all that’s weird and wonderful. 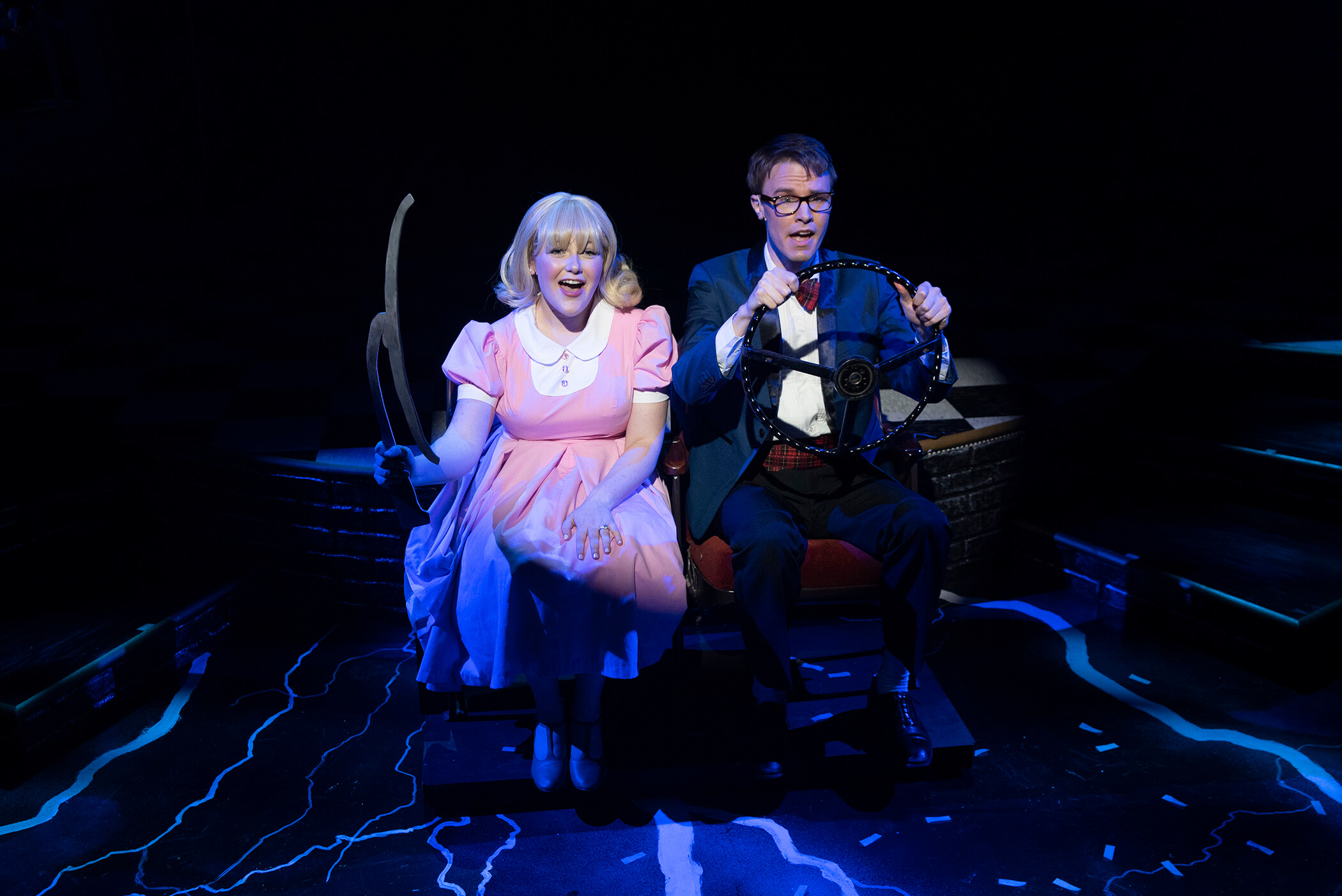 Directed by Kaitlyn McClincy, the production in a nutshell is all camp and shock value, but somehow you want to embrace your inner freak and all that it encompasses. As the show starts you go on a journey and enter a time warp with the quintessential conservative couple Brad and Janet who are engaged and go to visit their professor who coincidentally brought them together. When their car breaks down and they look to phone for help, they come upon a Transylvanian castle in the woods. Brad and Janet’s innocence is stripped away in the night with a chance meeting with mad scientist transvestite Dr. Frank ’N’ Furter and his other worldly entourage from outer space. There they encounter the “creature of the night,” and man-made Frankenstein-esque muscle man Rocky whose aesthetic is the epitome of the male species. A series of comical, hedonistic escapades ensue.

Hit numbers such as the tongue in cheek and sing-songy rhyming of “Damnit Janet,” upbeat “Time Warp,” and titillating “Touch A Touch Me,” pay homage to the retro rock ‘n roll feel that is similar to “Little Shop of Horrors,” or even the catchiness of “Grease,” on steroids. The music is fun, the dance numbers, even more of a riot. “Time Warp” will evoke a sensation that gets your toes tapping. Deranged gyrations and writhing on the floor are just some of the movements that take place, with choreography by Courtney Cairncross. Slipping and sliding around is to be expected with a host of factors that make for a rather slick floor, but it adds to the hype of the evening. The energy from the ensemble is the highlight of this show. There’s excitement in the air, the same kind of terrible thrill that you get from a whimsical, crazy fun house or horror theme park because the mind trip is just so out there. But the campy, kooky, and downright vulgar are exactly what make it so fun. 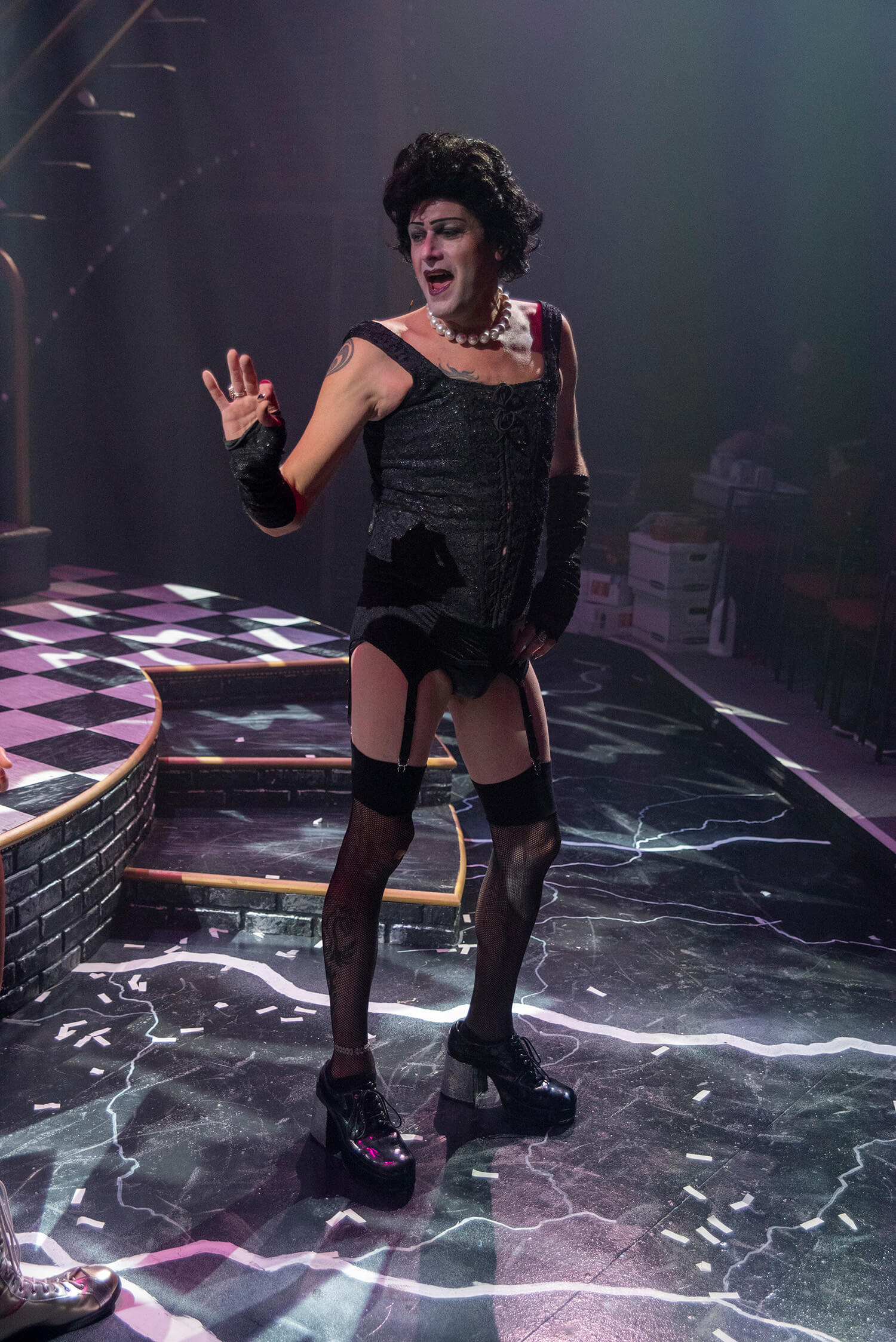 The set is a spectacle with minimal changes with a checkered floor and an eerie Transylvanian castle that is out of this world. Scenic design is by Matthew Hamel. Costumes by Amanda Fehlner light up this production, from bedazzled sequined vests to lacy corsets, boas, and thigh highs that both genders sport with poise. And who doesn’t enjoy corsets and fishnets, which enhance the overt sexual themes portrayed. Motifs of androgyny, innuendo, and the allure of sci-fi monster and horror lore add to the visceral and sensual allure of this over-the-top campy theatrical confection.

Husband and wife duo Erika Hall-Sieff and Ben Sieff showcase provocative artistry and star as the characters of Frank and Magenta. Other notable characters are Kevin Buswell as Riff Raff, Jason DeLong as Rocky, Charlotte Hedican as lovely naive soprano Janet (who spends an exorbitant amount of time in 1960’s undergarments), the spunky Olivia Howard as Columbia, and Cale Albracht (also in his underwear for the duration of the show) playing the rather dull and square Brad. Props to them both for baring it all on stage.

Overall, the show is extremely entertaining despite its unconventional story line (or slight lack of) and is a total throwback to the glam rock era of the ‘70’s. There is just nothing else like it. Given its popularity and cult icon status, it has certainly evolved into a mainstream audience favorite over time. But The Rocky Horror Show maintains an identity that is for the misfits and outcasts and those that feel marginalized in society, and it resonates on more levels than one.

The Rocky Horror Show plays through November 10th in the Howard Drew Theatre. Just in time for Halloween, it’s bound to sell out, so don’t miss it!