The tropes in science fiction we are familiar with range from campy to creepy, spaceships to super humans providing a language and rubric that helps us relate to who we are, where we came from and where we are going.

But beneath the laser blasters, alien takeovers and silver jumpsuits in these fictional futures there is always a question whether our realistic future will be a hopeful utopia or a ghostly dystopia.

Science Future, the newest exhibit at the Michael Phipps Gallery in the W. Dale Clark Library downtown, delivers the familiar visual language of the genre but also refers one to the internal narrative that science fiction attempts to relate.

The three contributing artists: Travis Apel, Launa Bacon, and Reagan Pufall bring work from very different mediums–metal & carved sculpture, oil on canvas and giclee, respectively–but all come together as a story board of a science futuristic scene.

Their work blends together to create a multi-layered dream world that travels from mystery to exploration to perception. What is delivered in Science Future undoubtedly feels less like fodder for a “Mystery Science Theater” commentary and more like the inspiration for an introspective series like “The Twilight Zone”. 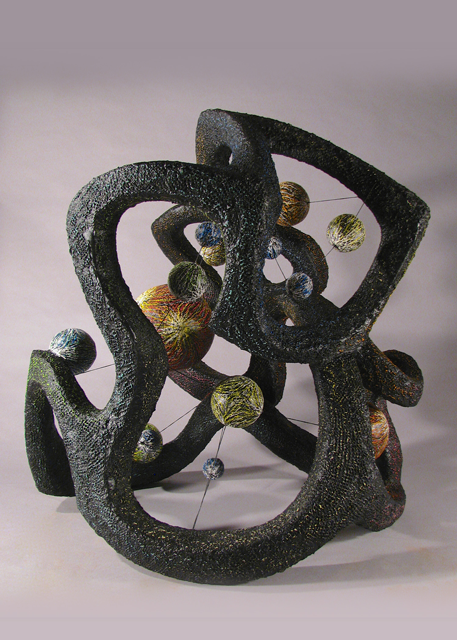 Apel’s sculptural work provides the inklings of the craggy terrain of a barren planet, with their organic curves and negative spaces like the setting for an interstellar chase. Within these spaces, Apel utilizes spheres suspended by cables.

There is a tension with this structure housed within the freeform shape around it, uncovering a process of exploring one’s relationship with each other and with the natural world. The spheres, Apel explained, represent ideas and the tendency for people to form like groups.

It is certainly an apt representation: the natural (he mostly uses stone and metals) container where chaos tends to organize itself. Without that organization, the apocalyptic landscape that pervades one’s vision of the future may be accurate. 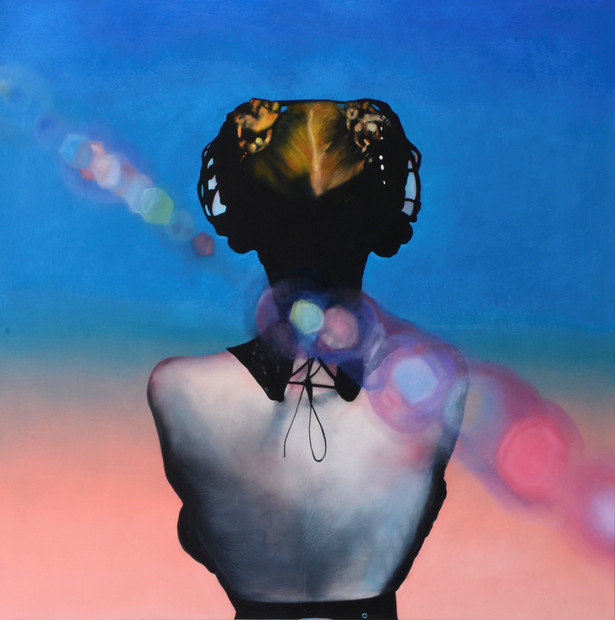 Light flares and modulations are the focus in Bacon’s paintings, evoking a disorientation bathed in splendor. In her work we find our perceptions changing according to the position of reflective pieces and patterns.

Two paintings, both called the “Flare Element of Frauhofer I,” depict a woman in one instance as sort of a mid-century photo as if found in an old album and in the other, the back of her head braided and with clothing reminiscent of a warrior princess.

Across both are multicolored orbs serving as flares of light, but in the former they obscure her features. A veneer is made from the elements, either allowing hidden capabilities to shine or protect those you don’t want seen.

There is also something here that adds a layer of peculiarity to the familiar. The subject of “8-Point Star to my Wandering Bark” is her Italian Greyhound, Duncan. Framed within the star is his mirrored face but at a distance, the form combines in the eye to reveal a new alien-like creature.

Whether the intention for that shape shifting is there or not, it certainly perpetuates the idea that in a science fiction future our minds and responses to our environment are open to dispute. 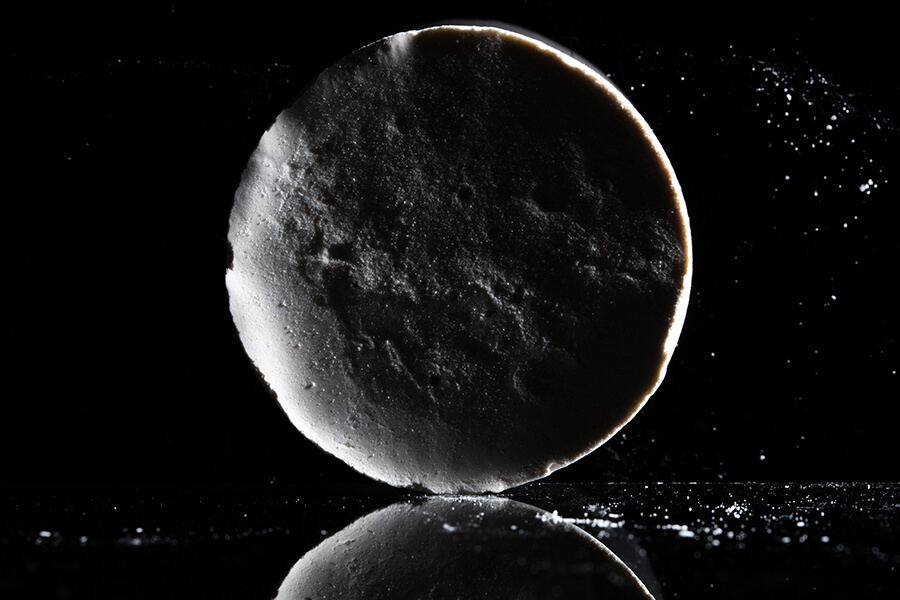 The aspect of science fiction that focuses on the unknown comes through in Pufall’s prints. The mysterious slivers of light and flecks of matter makes one feel that he is looking at something that may not really be there.

This is actually literally true, as Pufall uses small objects to simulate environments in his Etymology series. These objects then are able to transcend their literal meanings forcing viewers to question what they are seeing while forming stories for things that don’t make sense. Additionally it makes one eager to learn more.

In a conversation with Pufall, we discussed how the hallmarks of the science fiction genre translate to reflect current sociological themes. Citing film examples like “The Thing” and “Invasion of the Body Snatchers,” the details of the story reemerge with each new adaptation, but it is the context of the details and our connection with the visual language that show a deeper message of how we see the world.

Whether “Body Snatchers” is insinuating that pod people reflect communism in 1956 or post-9/11 American life in 2007, we use these tropes to explore the unknown, shape our perceptions, and cope with our surroundings.

Science Future is on display at the Michael Phipps Gallery in the W. Dale Clark Library through October 30. For details and hours, go to omahap