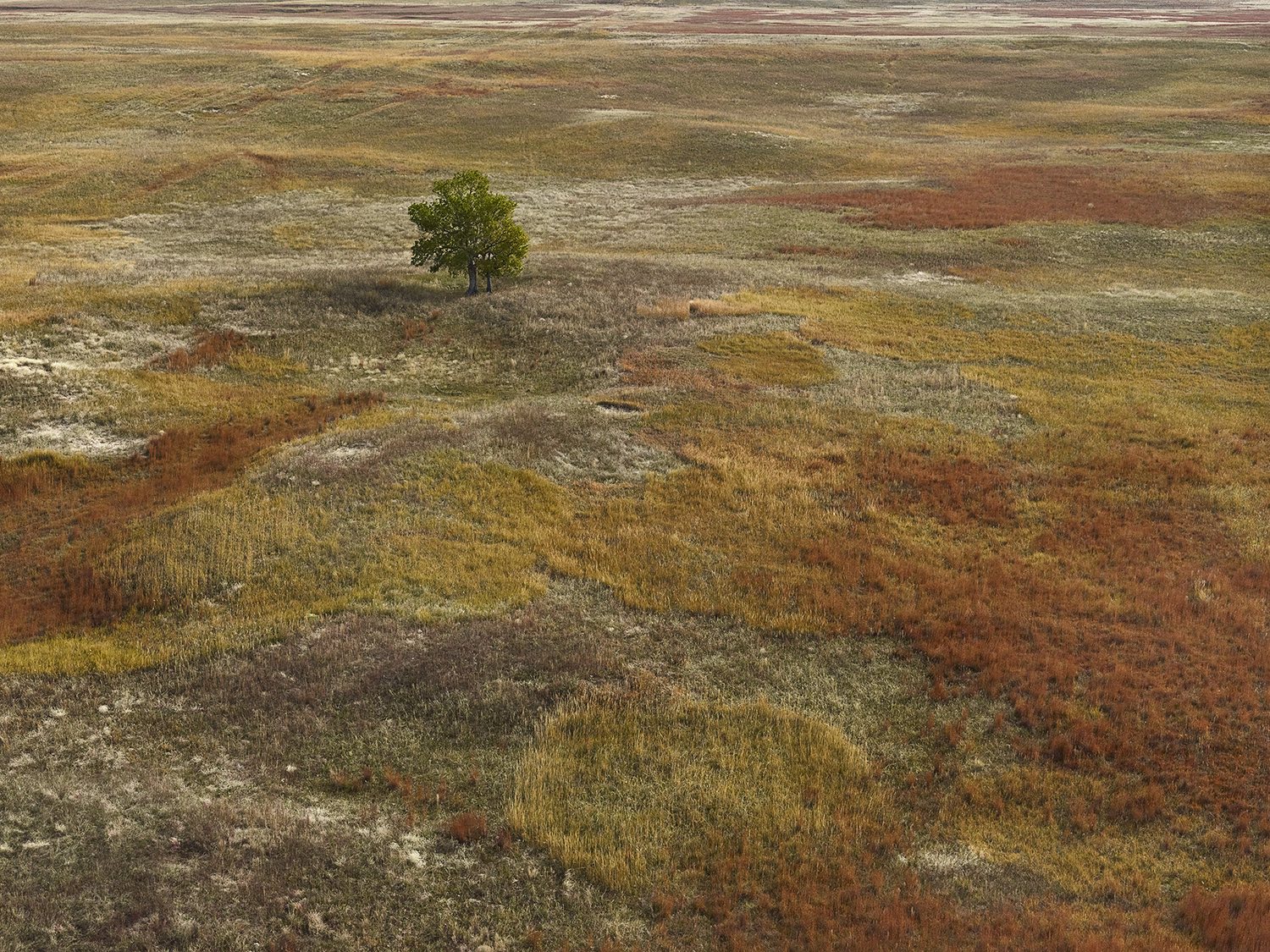 Scholars and historians continue to explore the definition and implications of the American Frontier, revealing an ever-complex intertwining of romantic mythology with distinctive economic, cultural, climatological and topographical realities. They debate the legacies of westward expansion and discuss its residue in the 21st century.

One thing they almost all agree on is just where this continental divide is located: along the 100th meridian, the longitudinal axis of the globe that runs from the Dakotas through Nebraska, Kansas, Oklahoma and Texas. It separates the prairie from the plains, the moist, lush forests and croplands from the arid, open rangelands east of the Rockies.

In 2005, photographer Andrew Moore answered the invitation of a sculptor-colleague to visit her family’s ranch in North Dakota. There he found a world he’d not previously contemplated, but with large format view camera in hand, started building a visual record of what he saw to be a landscape characterized by its “severe magnificence of dirt and emptiness.”

Moore’s decade-long discovery of some of the people and places on the dry side of the Frontier Strip is now shared through large-scale digital prints, and an accompanying catalogue, on view in the exhibition Dirt Meridian at Joslyn Art Museum through January 8.

It provides sharp-focused, highly detailed images of areas where there are more livestock than people, more miles than places, but where there are nonetheless significant markers of social and economic lives scratched into the harsh environment. 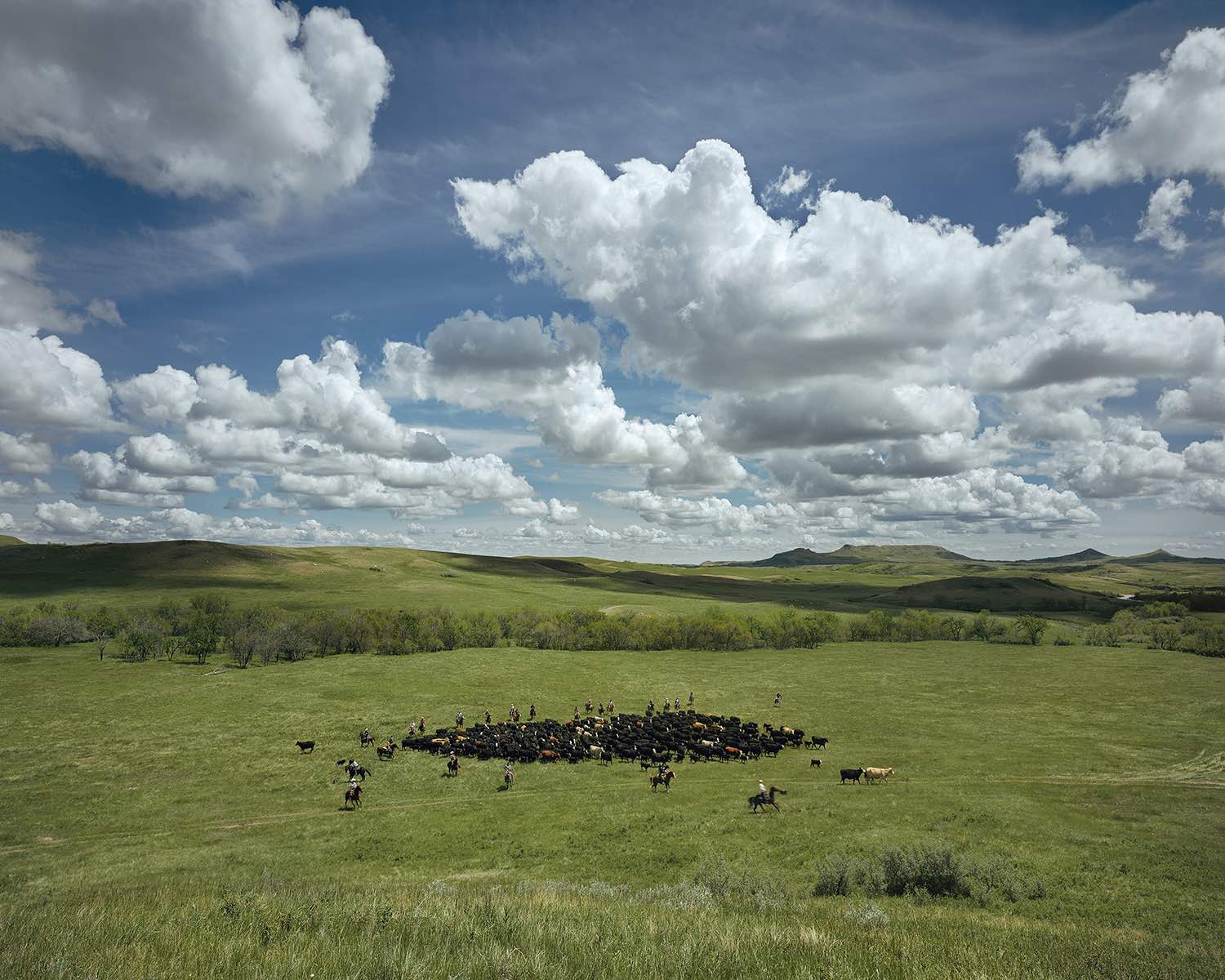 The exhibition opens with a few images from his early reconnaissance — “Round Up No. 2, McKenzie County, North Dakota,” and “Bassett Livestock Auction, Rock County, Nebraska.” The former captures the spring ritual of branding day.

Action is witnessed from a distance, the cattle forming a small black lake at the center of a grassy pasture, with Blue Buttes at the horizon. The clear blue sky is paved with puffy cumulous clouds — the lovely, visual standard of plains landscape imagery. The latter photo, save for the whirlpool of cattle on the barn floor, feels mainly like reportage.

It seems that Moore found his pictorial footing when he left the ground. More than six years after his first forays into the center of the county, he met Doug Dean, a bush pilot out of Rushville, Nebraska. Dean was able to ferry the photographer great distances in a fraction of the time.

Not only that, he knew the countryside like the proverbial back of his hand — the most interesting terrain, the spots unreachable by roads — and shared a love for the magnificent dormant in the subtle, fragile land.

With Dean, Moore was able to experience the land from a hawk’s eye view, hovering high, swooping low and tilting into his subjects. He also discovered that mounting his high resolution camera to the strut of the plane’s wing, connected to his onboard laptop, allowed him to capture the scenes largely unimpeded. It provided Moore the method to feature those aspects of the plains that intrigued him most, where the “intimate conjoined with the infinite.”

The results of that new approach to composition are seen throughout the exhibition. The marquee work as you enter is the mural-sized print, “The Yellow Porch, Sheridan County, Nebraska.” At its center is a dilapidated house, presumably (but not assuredly) uninhabited. With its unpainted wood siding and shake roof, the dwelling is the same color as the winter land surrounding it, save for bits of red brick and the yellow porch interior that are illuminated by the slanting rays of the sun.

The effect of the late day light, which can render objects sculptural, and the high definition capabilities of Moore’s digital capture yield an image with intoxicating detail. Every edge, every blade of grass, every bare-limbed tree twig is defined in a way that the eye cannot normally see or process. The photograph is reminiscent of super-realist painting; it is not hard to imagine Andrew Wyeth’s iconic “Christina’s World” or his many drybrush renderings of the wintry Pennsylvania landscape when looking at this print.

The artist’s stated preference is for revealing his subjects in their most dry seasons, where the color of dirt meets the hues of fallow nature. Moore feels that it best reveals the vastness, emptiness and harshness of the land, and illuminates the struggle and perseverance of the families who choose to inhabit it. (Added bonus, no bugs on his camera lens aloft.)

A great many of the photographs call out architectural details and natural textures with such vivid crispness as to seem altogether surreal. “Eroded Bank, Dawes County, Nebraska” is an overhead view of the line between a green grass field and the chalky ash and clay revealed beneath its surface, carved by the action of water and wind. Its sharp topographic detail reads like a relief map, as do the confluences of natural formations and piles of quarried materials in “Red Road Rock, Dunn County, North Dakota.” 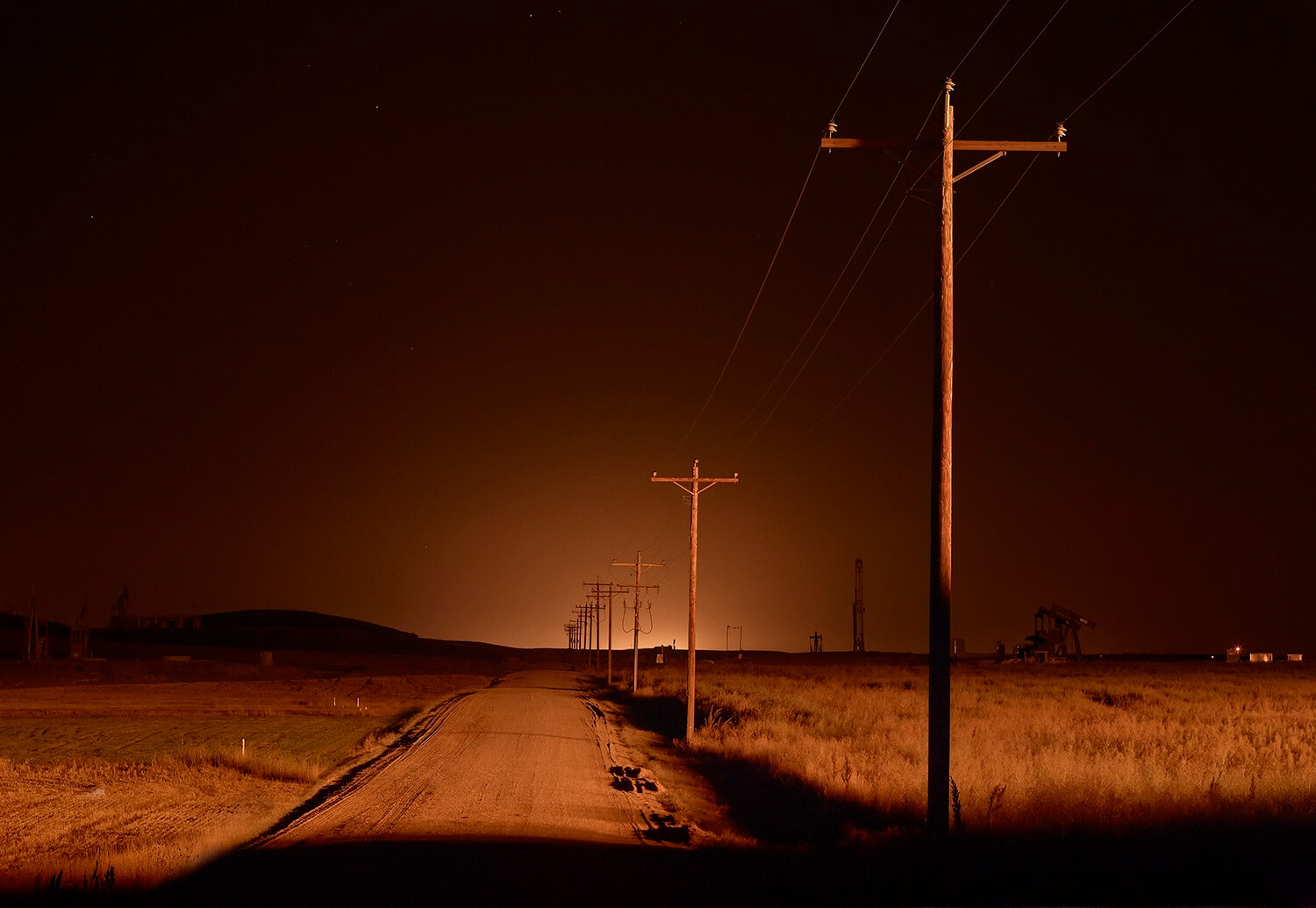 As demonstrated by wall texts and catalogue documentation, Moore did seek out the stories of the dwellings he found — of the lives that once inhabited them and of the probable reasons for their disuse. It’s also clear from his acknowledgments that he was interested in the communities he visited and tried to comprehend directly what drew individuals to live in the great wide open and why it remained a special place for them.

Portraits and casual images of those who make the high plains their home are certainly part of this project. “The Abbott Family at the Big House, Cherry County, Nebraska,” and “Moving the Herd, Harding County, South Dakota” both offer a look at the people who extend the frontier legacy and evidence the personal relationships that made Moore’s project possible and credible.

Images focusing on the economic realities imposed on the land are also in Moore’s view, including the agricultural, fracking, mining, and military-industrial complexes that have brought cyclical waves of prosperity and decline to these outposts. These certainly help extend the documentary range of the series away from the pure seduction of glorious ruin.

To be sure, Moore’s is not a comprehensive longitudinal study of the 100th Meridian, nor does it attempt to reinterpret the vast history that is Frontier America. With its emphasis on his time spent in Nebraska’s Panhandle, it offers a glimpse into the true grit that helps define much of the topography and contemporary lives among some of our fellow statesmen that is easily lost in its infinite expanses.

Dirt Meridian: Photographs by Andrew Moore runs through January 8, 2017, at Joslyn Art Museum. There is an admission fee for this show. The museum is located at 2200 Dodge Street. For further information, visit www.joslyn.org or call 402/342-3300.