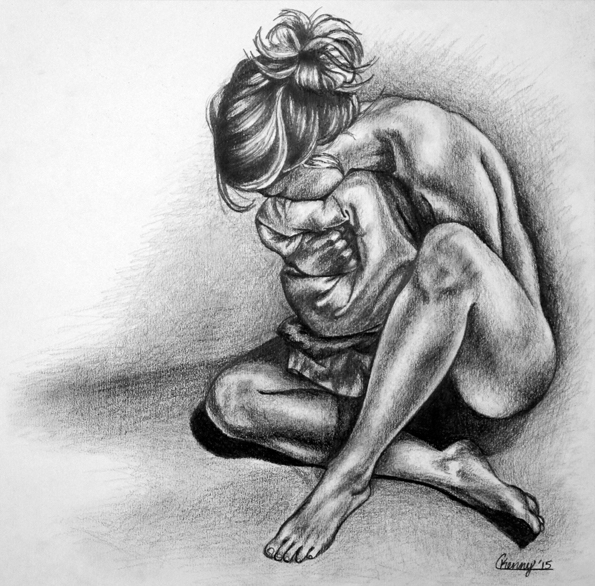 Courtney Kenny Porto is a feminist artist. That shouldn’t scare you. In fact, it’s an opportunity to understand women better, as they struggle to understand themselves.  You may be used to the more overt and tangible hallmarks of feminist ideas: “Leaning In”, Equal Work for Equal Pay, burning bras and the feminist art that helped tell its story.

Artists, journalists and activist are always trying to capture the “empowered woman,” but her solo exhibit, The Gray Area, at Connect Gallery tugged at my own struggles of being a good feminist as a woman constantly trying to do one’s best while wandering in and out of these ambiguous stages.

The subtle, intangible elements of feminism aren’t quite so easy to explain. It’s hard to put “I feel inadequate but I know I’m valuable” on a protest sign. One of the ways that Porto is successful in carrying this through is because she doesn’t adhere to a particular medium.

In fact, she finds it to be more deliberate and truthful to switch mediums based on a particular mood or subject matter. It requires her to focus her mentality differently and helps keep her brain fresh. It is not surprising that this is also an expectation of women to manage in their daily lives.

Not only does a variety of mediums let her tackle the choices and goals she has that particular day, it also upholds a feeling that women often try to remind themselves of: that there are many ways to be correct and that what’s right for them one day may not be right the next—and that’s ok. The impact of this comes through when you compare works with the same subject matter (in this case the female form) done in different mediums and styles.

While comparing the variety of greyscale works of female nudes, I was most struck by the story they told about the different ways women display their feelings. Her acrylics had cubist or expressionist tendencies, in every case obscuring the woman’s face.

For example “Confidence” was ironically titled, as the determinedly posed bodies had shapes in place of details. Perhaps, confidence can be found in incremental or safe steps before embracing courage.

In her graphite works, we find a similar theme although now with more realism in the forms. “She Felt Insignificant” gives us a woman with her face buried in a cloth, the details of her skin and hair so finely-tuned. In Porto’s world, the more honest and exhaustive the portrayal is the more vulnerable the subject feels.

Porto effectively uses grey scale as a fitting palette at times because women often feel very exposed—not necessarily in the nude, as the paintings are—but more so  because one’s time and attention is often demanded by so many. At the same time, it can also reflect one’s issue of identity, decision or fulfillment.

In contrast, though, the more colorful work elicits a different woman. In “Goodbye Beloved Breasts”, an otherwise unhappy event is told through a beautiful poise. We see the woman’s face, smiling, even centered in a frame—an act that shows her calling for our attention.

Porto said that color is about lightness to her, and one can see where lightness might equate to freedom here. It isn’t just a simple comparison of grey=gloomy, pink=happy. It is an attention to the layers we recognize in ourselves and what they provide for us. The more layers we attribute to who we are, the more we find an identity that is about what we want for ourselves, not what others expect us to be.

Another tactic Porto uses is having animals serve as placeholders for women. She does this in many cases to protect a model’s identity or to make the viewer more comfortable in scenes where it may seem inappropriate.

The use of placeholders we can all identify with in order to avoid confrontation or feeling  awkward, thus elevating someone or something else that might do the job better. Conversely we may also use similar tactics to elevate oneself and status out of feelings of insecurity or inferiority.

There was one piece that felt different from the others, but also seemed to combine them. “Red’s Pet Wolf” features a young girl in her red cape with a large wolf on a leash in a matching red bow tie. The girl is beaming with her face rendered in realistic graphite.

Red has faced the things that scared her and changed them into the things that give her strength and fulfillment. These things might also provide her a protective barrier. It is set in a fairy tale world, susceptible to idealism, drama and a happy ending.

Courtney Kenny Porto gives us vignettes that allow us to see these intertwining ideas and emotions that tell feminist’s stories on more than just a conceptual level.

The Gray Area is on view at Connect Gallery, 3901 Leavenworth Street, through December 31. For more information, visit connectgallery.net or courtneykennyart.com.