Home » Uncategorized » Thrilling and Hilarious, The 39 Steps Goes Off Without A Hitch

The 39 Steps encapsulates the epitome of the classic whodunit spoof that emanates a pastiche of the film noir era. Everything and I mean everything, is parodied, resulting in a rollicking production of theatrical mastery. The play opened at The Lofte Community Theatre October 12th and is directed by Kevin Colbert. A dynamic talented four comprises the cast: Mike Kruger, Anne Pope, Andrew Schell and Dillon Kirby. So much versatility and theatrics are at play, with adept, pliable characters under the clever guise of hijinks and Hitchcock allusion.

The premise of the 1935 Hitchcock film later turned hit Broadway play is that of the typical film noir narrative. Richard Hannay nonchalantly sits in an armchair pondering about life and needs a diversion to escape the mundane. At the theatre a series of events happen that lead him on a madcap adventure involving a foreign spy, and starring him as the innocent man on the run. Sitting on the edge of our seats we witness romance, battle of the sexes, mistaken identity, maniacal professors, and dun-dun-dun!-the notorious 39 steps, (cue the flash of a spotlight). 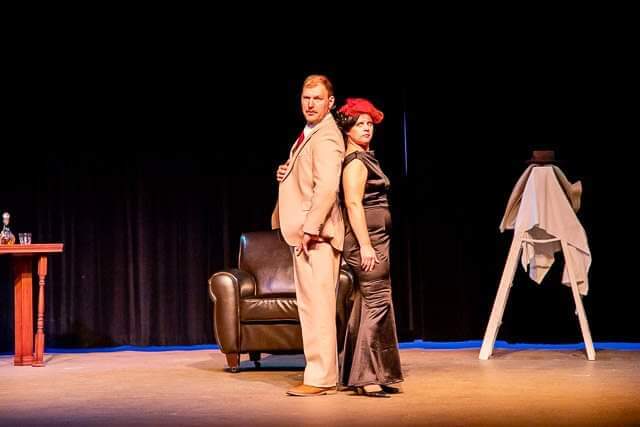 Two things intertwine beautifully in this production with precision- film noir, and the classic screwball comedy. The bedroom farce and light comedies are timeless plays often seen in theatre, and “The 39 Steps,” nuances a little bit of both. Akin to the farcical themes a la in the vein of “Noises Off!,” “Lend Me A Tenor,” or “Rumors,” “The 39 Steps” has many unforgettable moments that heighten the tension and make for great comedy, perfecting the art of the farce. There’s a riveting scene where Pamela takes off her stockings and Richard Hannay finding himself chained to her person, discovers he can then surreptitiously take advantage of his uncanny situation. Another particularly humorous moment is when limbs become entangled while Richard Hannay and Pamela climb over a fence post as he drags her along the Scottish moor in search of “Alt-na-shellach.”

Both Kruger and Pope play off each other effortlessly, their chemistry palpable. The shtick is on point with timed comedic beats and vaudeville slapstick humor. The entire show feigns an air of mystery, a satirical portrayal of Hitchcock’s greatest classics, from North by Northwest, to Rear Window. There’s even a reference to The Birds. It’s fast paced and a feat unto itself, with multiple quick changes segueing into character transformations on stage, German, Scottish, and British accents, and a trope that’s bent on perpetually breaking the fourth wall at all times. Its absurd antics lend to absolute hilarity throughout the whole night.

Kirby and Schell, aptly deemed clowns in the show, showcase an adroitness for comedy and play each character with ease as they switch back and forth with fluid transition. It’s dizzying yet exhilarating as they continuously play off of each other and never miss a beat. Whether as Mr. Memory, or as the compere, Kirby and Schell are a vaudevillian class act. Schell’s spot-on Scottish brogue as a crofter in one scene lends to a hysterical moment. While suspicious of his soft-spoken wife Margaret together with Hannay, he leads a sanctimonious prayer aimed directly at them as Margaret discovers Hannay’s identity.  Kirby embodies the ever so debonair, suave, and devious professor, complete with burgundy smoking jacket, black and white ascot, and cheroot cigarette holder, mastering several impressive lightning fast quick changes. 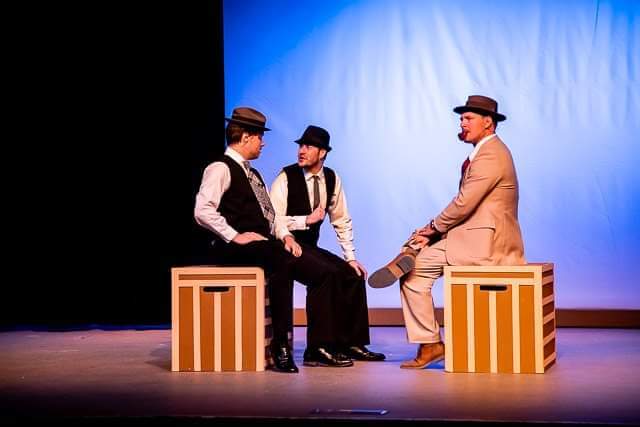 Sartorial choices are superb, reflecting the elegance of a bygone era. With costumes by Tami Kruger, much attention to detail is applied, with vintage 1930’s pieces that really make the show. A gorgeous vintage white trench coat in mint condition, tailored waistcoats, three-piece suits, and a statement smoking jacket tie the film noir imagery all together.

As aforementioned, the fourth wall is intentionally broken, therefore the set is minimal in design. A single door frame that can spin around, a wooden frame representing a window, and a lone armchair are just some of the few pieces actually on stage. Some of the set is left up to interpretation, most of it imagined as your mind fills in the gaps of the missing pieces. It all adds to the illusion of the scene.

Coupled with a little suspense and a lot of laughs, this show is so amusing you can’t get enough of it. The 39 Steps plays through October 27th at the Lofte Community Theatre.