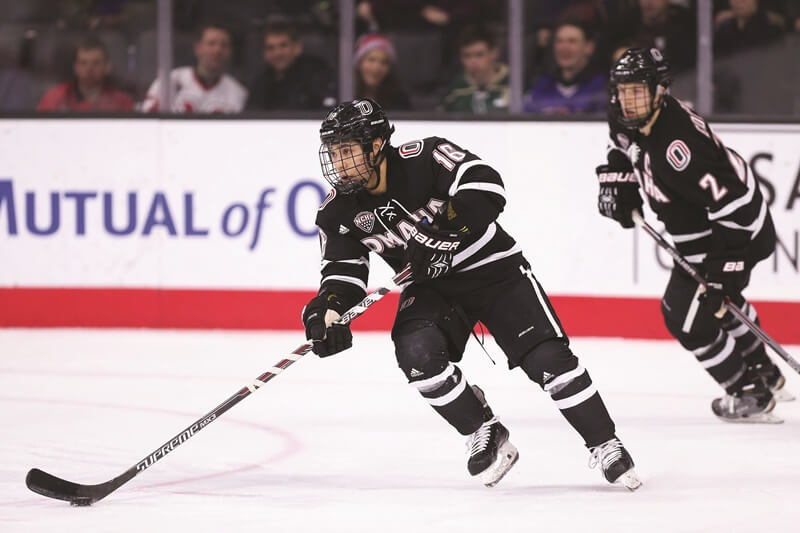 UNO’s given everything for hockey. Coaching legend Dean Blais was hired to make the program a national title contender. The sport that draws 7,500 fans per home contest led the University of Nebraska at Omaha down a Division I path that ultimately meant sacrificing football and wrestling. Baxter Arena was built to provide a big home ice advantage.

High expectations were finally realized when Blais led UNO to its first Frozen Four following the 2014-2015 regular season. Following that historic run a young Mavs team completed an unbeaten non-conference schedule in 2015-2016, even earning a No. 1 ranking, only to struggle for goals and wins the second half. Losing eight straight games killed any playoff hopes. Those losses came to elite clubs in the famously tough National Collegiate Hockey Conference, and Blais knows his returners will be one year older and stronger heading into this season.

UNO plays the University of Alberta in an Oct. 8 home exhibition before trekking to Fairbanks, Alaska for the Brice Alaska Goal Rush tournament. UNO opens the regular home schedule against Vermont Oct. 21-22. The Mavs end the season with several series matched against NCAA tourney teams.

After last year, Blais hopes his guys are “a little more committed, a little more hungry” to better weather another challenging stretch.

“I think they are,” he said. “I think as a group they were very disappointed overall with their production. But that has a lot to do with the NCHC and the competition we played, too. We were the only undefeated team in the country non-conference, which should have put us in great position pairwise. Then we had the eight losses – but against maybe the three best teams in the country. St, Cloud won 30 games. North Dakota won the national title. Denver made it to the Frozen Four.

“Sometimes losing is the best thing. The way it happened last year will be a motivating factor.”

He hopes young players who flashed early in their careers but then slumped will click again.

“I think the players know if we’re going to contend we can’t have any passengers, we can’t have any guys who had a pretty good freshman year and not so good sophomore year and then an okay junior year. We’ve got to be more consistent. That’s what we’re trying to get across to them.”

Only time will tell how new faces blend with veterans.

“The guys like each each other, they get along, but we’ll see. It’s real competitive now. They’re more concerned about jockeying for position right now than they are team-building. Guys are worried about if they’re going to be on the top line or in the stands watching because we’ve got 27 hockey players and we can only dress 20 in a game.

“Once we start playing games we’re going to see the togetherness and the team-building. But right now it’s training camp and the strong will survive through this thing.”

Through September NCAA rules severely limit the time coaches can spend with players. In the pre-season it was too hard to tell where his team stood mentally, though he said, “Physically, the guys came back looking in real good shape. Little by little I think our guys are feeling more comfortable, getting in better shape. We had a tough skate one Saturday and they held up to it. It’s not there yet, but it’s getting there.”

He’s curious how this club’s team dynamics shape up.

“They’re coming together as a group right now. I try to move guys around to find that chemistry and we haven’t found it yet.

I haven’t seen a magical line together. You might have nine great forwards but that doesn’t mean you have three great lines out of there. You need a little bit of everything. You need a guy that can bury the puck such as Austin Ortega.”

Ortega, a goal scoring machine, is back for his senior year with school career scoring records within reach.

Blais added, “You also need a player that can move the puck the way Jake Guentzel did. He probably had the best hockey sense of anyone in college hockey last year.”

The Mavs lost Guentzel to the NHL’s Pittsburgh Penguins.

“Then you need more of a grinder that can get in on the forecheck and be responsible defensively.” Blais said. “All those things are available with the players we have. But how about that chemistry? That’ll come together and it’s gotta come together fast. But the players have to sort that. They have to find who their leaders are, who their go-to guys are … “

“They’re good guys off the ice – they’re great in the classroom.

But do they have what it takes to hang another banner in our arena? We’ve talked about that with other teams and we’re going to talk about it when we get together this year. So far we haven’t because we haven’t had time to even set goals.”

Blais expects losing Guentzel, whom he “considered the best player in college hockey last year,” to be offset by quality depth.

“I think we have all the pieces to the puzzle. We’ve got the talent at every position. Three of our seven freshmen got drafted by the NHL. I don’t think we have a weakness.”

“Evan Weninger was the NCHC Rookie of the Year in goal last year. Alex Blankenburg stepped into his first start and beat North Dakota 4-3 in Grand Forks, That was only one of two games they lost the whole year. We have Kris Oldham from the Omaha Lancers. He’s an NHL draft pick. He’s a big goaltender who covers a lot of net. So I think we’re comfortable in the goal. Do we have an All-American goaltender? We could have.”

Overall, he said, “There’s a lot of questions to be answered that you cant’ control – how are they going to behave in the locker room? Are they going to come together? Do we have that leader that can step up? You gotta have good captains that take over the team. There’s a lot that goes on behind the scenes. We have great students, but do great students make great hockey players? Not necessarily.” He said he’s looking for his players to bring the same resiliency and intensity they do in the classroom “to the ice every game, every practice.”

He knows his underclassmen must contribute big time.

“They have to step up or we’re going to have a tough time achieving what we want and that’s a national championship. A lot of people can talk about it – few can get there.”

He bristles at any notion that at 65 he’s losing his edge.

“Well, if somebody says I don’t have the hunger or the will to win I’ll have a boxing match anytime they want. I’m always ready to go. I’m up at 5:30 planning my practice, putting lines together. I recruit as hard as anyone. I’ll jump in the car and drive 10 hours to see a game. I’m in the arena all day long.

“Practice is the best time of day for me. There’s nothing I like more. I’m usually one of the first guys on the ice. I just can’t wait to get out there and help the players get better, which will help them to win.”