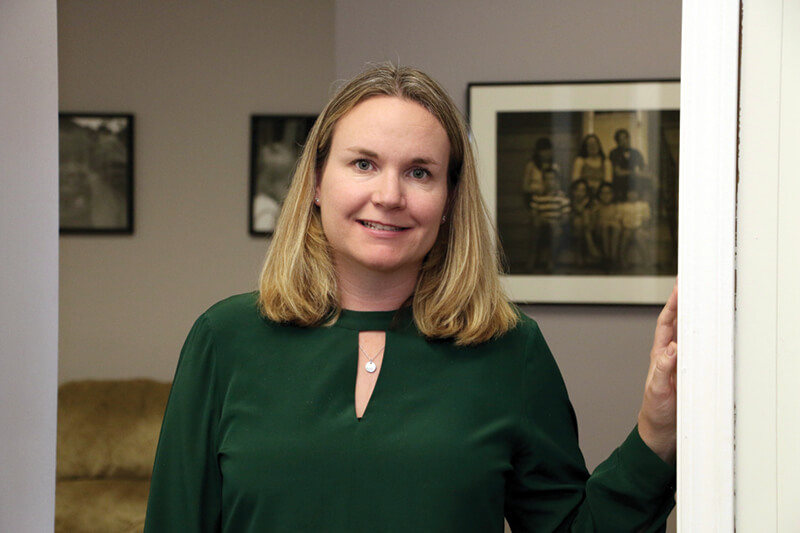 “Unfortunately,” she said, “things haven’t gotten much better. I think we’re largely in the same place. When we think about poverty in Omaha and Nebraska there are two main stories. One, poverty continues to be highly racialized. Children of color, particularly black and Hispanic children, have much higher poverty rates. So poverty’s gone up in general and the groups disproportionately affected by it continue to be. We haven’t made progress addressing those disparities.

Experts say want isn’t exclusive to the unemployed but extends to the underemployed working poor.

Mancuso said, “We often think just finding a job is the solution, and it is about jobs, but it’s about quality jobs that allow you to afford all your expenses, save for a better future, own a home, have a retirement cushion and something to hand down to your children and have a buffer against unexpected health-related expenses, job losses and all those things. It’s about the opportunity to stabilize your income by building assets.”

She said “the reality is more complicated” than pulling yourself up by your bootstraps. “People are doing the best they can with the situation they’ve been given. As a children’s advocacy group our position is we have a collective responsibility to all our kids. Kids are vulnerable and we need to think about how we can help them.”

She noted the recent presidential election revealed how the disenfranchised “sense somehow the deck is stacked against them, and when we’re talking about families in poverty, that’s really true.” She said generational poverty means “families and kids start off behind and face barriers that pile on top of each other.”

“We know poverty is very damaging for children and I think that starts even before birth. Prenatal care, early healthcare visits and early learning experiences are crucial. If parents don’t provide those things, you see consequences later in life.”

“As a society I don’t think we appreciate the choices people in poverty have to make on a daily basis. Maybe your car breaks down and you don’t have another way to get to work. so you take out a payday loan to get it fixed, but the exorbitant interest rates get you caught in this cycle of debt you can’t escape. It’s day-to-day survival. It’s not through any lack of trying, it’s just super complex and really hard. But I’ve seen enough people who have turned it around with help and by working hard to know it can be done.”

Clements said even many middle-class Americans are a few big life bumps away from tough times.

“You don’t always know how close to the other side you are. All it takes is a bad series of events.”

Geo LaPole invested everything in his own flea market, where he also lived. Things went well until business dried up. Unable to make the rent, he lost his business and home. He struggled keeping a roof over his head. Then he lost a job. He went through Heart Ministry Center’s Fresh Start program and now works there.

“You’re given the basic things you need to start fresh. It helped me immensely. It gave me access to the pantry, mental health counseling, somebody to listen and to point me in the right direction.”

LaPole said pride prevents some from asking for help.

“I almost didn’t accept the help. I finally said, ‘I deserve help just like everyone else does, why not make myself normal so I can help somebody else.’ Until someone grabs you and helps you, there’s no helping yourself because you don’t know how to help yourself.”

Poverty is not just confined to inner city neighborhoods either. Experts say there are pockets of suburban poor who also utilize helping services.

Everyone coming to Together or Heart Ministry Center has a story.

Clements said, “We were able to help a woman who fell on hard times pay her mortgage. I’m glad we were there to help her avoid sliding further down the poverty scale. We were able to get a woman living on the streets on general assistance and into the Literacy Center. Now she’s reading at a seventh grade level. Maybe she’ll get her GED.”

Big Lou Parker battled addiction, then buried his wife, leaving him to raise five children. He found sobriety and opened a soul food eatery only to suffer a massive heart attack. Medical bills forced him into bankruptcy. The center helped him get back on his feet and he now owns a successful lawn care business.

Homeless veterans and LGBT youth comprise subgroups of the poor seen at Together, 812 S. 24th Street. After making clients safe, any addictions or mental health issues get treated, and then pathways to education, employment and housing are found. Together refers clients to partner agencies for services as needed.

It works the same at Heart Ministry. “It takes a lot of different touches to get somebody through it,” Clements said. “That takes time. It’s baby steps. People can work on specific goals here. We try to find ways to connect them to mentors. The more people we can put in their life to build that personal infrastructure and to have in their corner, the better.

‘”Just by being involved in their lives, things tend to improve. It’s part of this puzzle. When they know somebody cares, they feel better about themselves.”

Most poverty services address urgent basic needs or crises, such as eviction, utility shutoff, hunger and clothing. The immediate goal is stability.

“Through our pantry we give out between 1.2 and 1.5 million pounds of food and feed 20,000 people a year,” Clements said. “You don’t want to feel you’re just a stop gap – you want to see change. When you see the tide of need, it makes you wonder … Is this going to end, is this going to get better for people?”

Longer-term goals get addressed with case management support, much of it dealing with financial counseling.

Unresolved debt can further trap people in poverty and expose everything they own to collectors (see related story in this issue). If someone’s already low wages get garnished, they may fall behind on rent or car payments and find themselves without a permanent place to live or a vehicle to drive.

Negotiating poverty’s cascade of effects and harsh decisions, such as forgoing regular healthcare or letting one bill ride to pay another, is reality at Minne Lusa Elementary School, where 94 percent of the students receive free or reduced lunch. Principal Kim Jones admires the fortitude of parents and kids who confront it daily.

“I’ve learned so much about resilience and about how much we’re needed.”

Lisa Utterback, an Omaha Public Schools administrator who turned around nearby Miller Park Elementary as its principal, said contrary to perceptions, “a child from these circumstances can be molded and influenced and can achieve – you can change their lives and give them a sense of hope that things will be okay.” She said too often society imposes artificial limits. “There’s just a lack of believing in potential. Sometimes adults don’t know how to fathom the obstacles kids face. If you can’t even wrap your mind around it, you can’t help problem-solve.”

Voices for Children’s Aubrey Mancuso said, “If we want to set youth on a course that leads them to higher education, we have to start with very young children. Early childhood education opportunities are part of it. We need to think about giving kindergarten students college savings accounts that grow over time and give them a resource to put towards higher education. That would help offset some of the disparities in being able to build wealth and access higher education. It’s important we get to kids much younger on the spectrum and really build that aspiration to take that next step after high school.”

She said more can be done for poor families.

“There are things that work to help build wealth that aren’t reaching lower income families that we can better leverage. One is the earned income tax credit for working families that puts more money back in their pockets and gives them an opportunity to save or pay off bills or whatever. Our state earned income tax credit is too low. We also have a state child and dependent care tax credit whose income eligibility levels haven’t increased since the 1990s, so we need to revisit that.”

Mancuso and her team worked with outgoing state Sen. Tanya Cook to write and pass LB 81 that allows families two years of transitional assistance at a much higher income level before they have to bear the full cost of child care.

Mancuso also advocates a public pay-in program that does for poor kids what Social Security does for seniors.

“We haven’t collectively made those same investments in our kids, and I think that’s what we really need to do next. We need to have the will to carry it forward.”

She said the widening division between haves and have-nots compel us “to work harder, be kinder, be more thoughtful and be more inclusive.”

Heart Ministry’s Jim Clements said in lieu of neighbors directly helping neighbors, centers like his as well as churches and shelters are the front-lines “to give people a lifeline and help pull them out. It takes some resources, some time, some patience,” he said, “but helping turn people’s lives around strengthens the entire community.”

Together’s Mike Hornacek said real strides addressing poverty will happen when people stop making judgments, assigning blame or viewing it as someone else’s problem and “come around to saying, ‘That could be my neighbor or friend, that’s something that can happen to me.'”

Humanizing poverty and having compassion is a start.

Experts advocate more avenues for the poor to acquire skill sets that net living wage jobs and to access capital for startups, asset-building and home ownership. Paths to self-determination should lessen the need for safety nets from crises and protections from predatory forces.